The following is a well-spoken explanation of this chart.  At the end of the article ar Youtube videos by David Hawkins also explaining his chart.  When I read this book over 15 years ago I was highly impacted by the information – and through a lot of self-reflection, I started to realize how I was raised and how I had been living and reflecting those levels of consciousness – and then made some necessary changes.  Use this chart for your own self-reflecting and make necessary changes and use this chart to see where other leaders/people/societies/countries are “coming” from.

At PFC we are looking forward to having the scalar mind control taken down, so we can more easily increase our consciousness and live in new societies of higher consciousness.

On our journey throughout life we find ourselves met by all kinds of people and all kinds of situations and experiences.  Our ability to learn and grow from these experiences is based  largely on our ability to discern truth from falsehood.  It has been demonstrated over the eons that the human mind is incapable of discerning truth as the stunning evidence of pain and suffering mounts, not only at the individual level but also at the level of entire civilizations.  Dr. David R. Hawkins, MD, PhD has created a tool that he calls the Map of Consciousness.  This map was developed to overcome the inherent limitation of the human mind, whereby falsity has been misidentified as truth.  His ultimate goal “is a connecting of the dots so that the hidden picture emerges.  The hope is that this work might undo the very sources of pain, suffering, and failure, and assist the evolution of human consciousness in each of us to rise to the level of joy that should be the essence of each and every human being’s experience”. (1)

The Map of Consciousness was created by Dr. David Hawkins, a psychiatrist, who experienced several life-altering events throughout his life.  Following each event, he noticed a change in his state of consciousness from an ego-based/ mind focus to a completely overwhelming state of overpowering bliss where he felt a constant, steady connection with the “Presence”.

With this dramatic change in his level of consciousness,  he decided that he must pursue the reason why it had changed and how he could describe the changes to help mankind in the pursuit of enlightenment.  His driving desire was to “address the causes of the endless stream of spiritual distress and human suffering”.(2)

The Map of Consciousness is a numerical scale whereby one can measure positive from negative, power from force and truth from falsehood. Dr. Hawkins believes that every word, every thought, and every intention creates what is called a morphogenetic field, or attractor field, and that these energy fields can be measured by a very simple process. This process is a well-established science known as  Kinesiology. Kinesiology is defined as the study of muscles and their movements, especially as applied to physical conditioning. The study of kinesiology first gained scientific attention from the work of Dr. George Goodheart, who pioneered the specialty he called Applied Kinesiology, after finding that benign physical stimuli such as beneficial vitamin and mineral supplements would increase the strength of certain indicator muscles, whereas hostile stimuli would cause those muscles to suddenly weaken.

In the late 1970s, Dr. John Diamond refined this specialty into Behavioral Kinesiology where indicator muscles would strengthen or weaken in the presence of positive or negative physical, emotional and intellectual stimuli.

Dr. Hawkins’ research took Dr. Diamond’s technique several steps further, by discovering that this kinesiologic response conveys man’s capacity to differentiate not only positive from negative stimuli, but also anabolic  from catabolic, and very dramatically, truth from falsity. The Map of Consciousness reflects millions of calibrations of statements, thoughts, photos, art, music,  influential world leaders in every discipline and in almost every area of human endeavor.  The research carried on for over 20 years to come up effectively with an anatomy of consciousness that reflects the entire human condition. . . . (article continues) 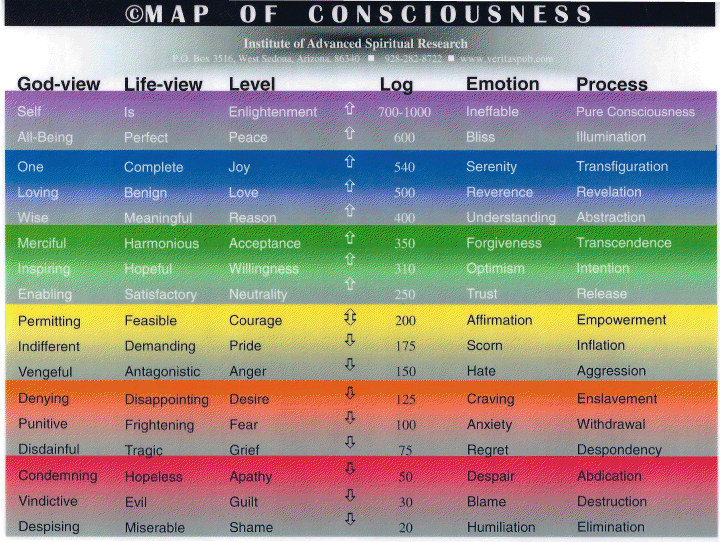 The Spectacular Failure of COVID Shots

The Spectacular Failure of COVID Shots

ACT OF WAR: Thanks to covid “vaccines,” the military’s cancer rate...

Liberal California Lost the Most Population of Any State in 2021,...