Prepare For Change
Home ARCONTES Italian Government Study: 99% of their Coronavirus Fatalities Were Already Sick; Half... 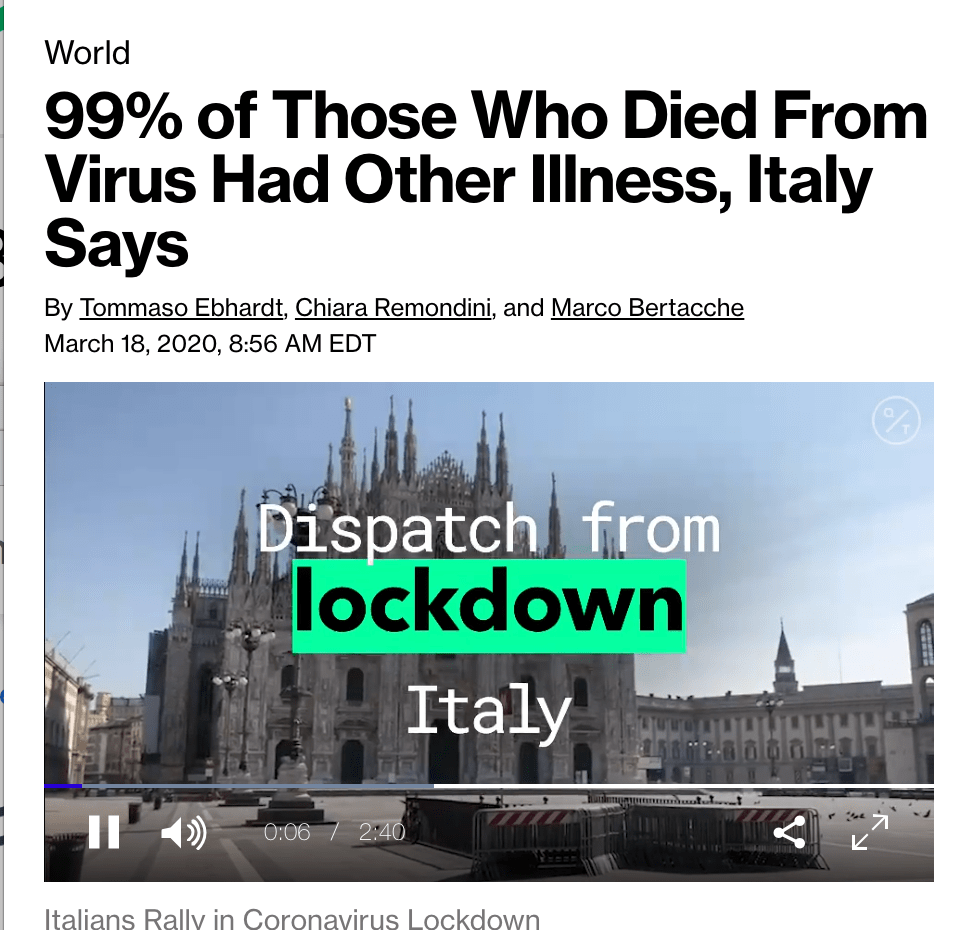 Serious doubts about the accuracy of COVID-19 testing methods, results, mortality rates, and the supposedly unique and extreme lethality of this virus are starting to emerge, even within mainstream media and government reporting. A recent study released by Italy’s national health authority found that nearly everyone who was pronounced dead from COVID-19 was already struggling with serious chronic disease(s).

A recent article in Bloomberg titled, “99% of Those Who Died From Virus Had Other Illness, Italy Says,” illustrates an overlooked point in the corona-panic taking the world by storm: the status of one’s immune system and overall health determines morbidity and mortality, and likely your susceptibility to infection in the first place.

The study found that,

“More than 99% of Italy’s coronavirus fatalities were people who suffered from previous medical conditions, according to a study by the country’s national health authority.”

“The Rome-based institute has examined medical records of about 18% of the country’s coronavirus fatalities, finding that just three victims, or 0.8% of the total, had no previous pathology. Almost half of the victims suffered from at least three prior illnesses and about a fourth had either one or two previous conditions. More than 75% had high blood pressure, about 35% had diabetes and a third suffered from heart disease.”

“The median age of the infected is 63 but most of those who die are older.

The average age of those who’ve died from the virus in Italy is 79.5. As of March 17, 17 people under 50 had died from the disease. All of Italy’s victims under 40 have been males with serious existing medical conditions.

While data released Tuesday points to a slowdown in the increase of cases, with a 12.6% rise, a separate study shows Italy could be underestimating the real number of cases by testing only patients presenting symptoms.

According to the GIMBE Foundation, about 100,000 Italians have contracted the virus, daily Il Sole 24 Ore reported. That would bring back the country’s death rate closer to the global average of about 2%.”

This new report challenges much of the global reporting on the topic which presents a unilateral narrative that simply being exposed (within six feet) to someone who may have tested positive for the virus is life-threatening, independent of one’s health status and other precautions one might take, such as supporting one’s immune system.  Elderly people, already experiencing polypharmacy for multiple life-threatening diagnoses for chronic diseases, are highly susceptible to opportunistic infections due to their chronic conditions, the adverse effects of pharmaceuticals, and subsequently weakened immune systems. Blaming a single virus for causing their deaths is not evidence-based, nor does it fulfill the basic postulates established by 19th-century German physician Robert Koch to ascertain whether a singular virus can cause a singular disease. There are a wide range of viruses that can cause the symptoms associated with COVID-19 infection, which include the several hundred different influenza viruses known to play a role in seasonal flu.  It’s also known that the Coronavirus family of viruses contain over a hundred different strains, seven of which cause the common cold. Some of these viruses exist naturally within the human virome, and never express themselves pathogenically, but will potentially cause false positives through the many different COVID-19 testing methods being used today. Indeed, assuming the original source point of this supposedly novel form of infection came from Wuhan, it doesn’t appear that the claimed singular causative agent — COVID-19 — was ever properly identified, purified, and characterized in multiple humans suffering from the disease (nor was its absence determined in healthy humans). This would be required, as we pointed out recently in Dr. Wodarg’s testimony, in order to fulfill step one of Koch’s four postulates, which would demonstrate scientifically that a singular microorganism like a bacteria or virus is the causative agent behind a disease (the most basic tenet of germ theory). Based on the testimony of Dr. Wodarg, the gold standard would have required the purification of the virus and characterizing it via electron microscope technology, as well as establishing an effective and independently verified virus testing method (which would have required using PCR-reverse transcriptase testing within multiple cases of those suffering from the identical disease) — two things, it appears, were never done; or at least not reproduced and therefore validated independently through other laboratories and medical institutions.

Nor were any of the remaining three Koch postulates fulfilled:

Until an original singular causative agent can be identified through multiple cases, and that agent can be purified and proven to cause the same disease in animals, and then re-purified to establish it is indeed the cause in humans, much of what we are hearing are “confirmed cases” and “COVID-19 fatalities” may be inaccurate, and further fanning the flames of fear, panic, and global instability.

For more information on the problem of false positives and inaccurately inflated numbers of both “confirmed cases” and fatalities, read the following: