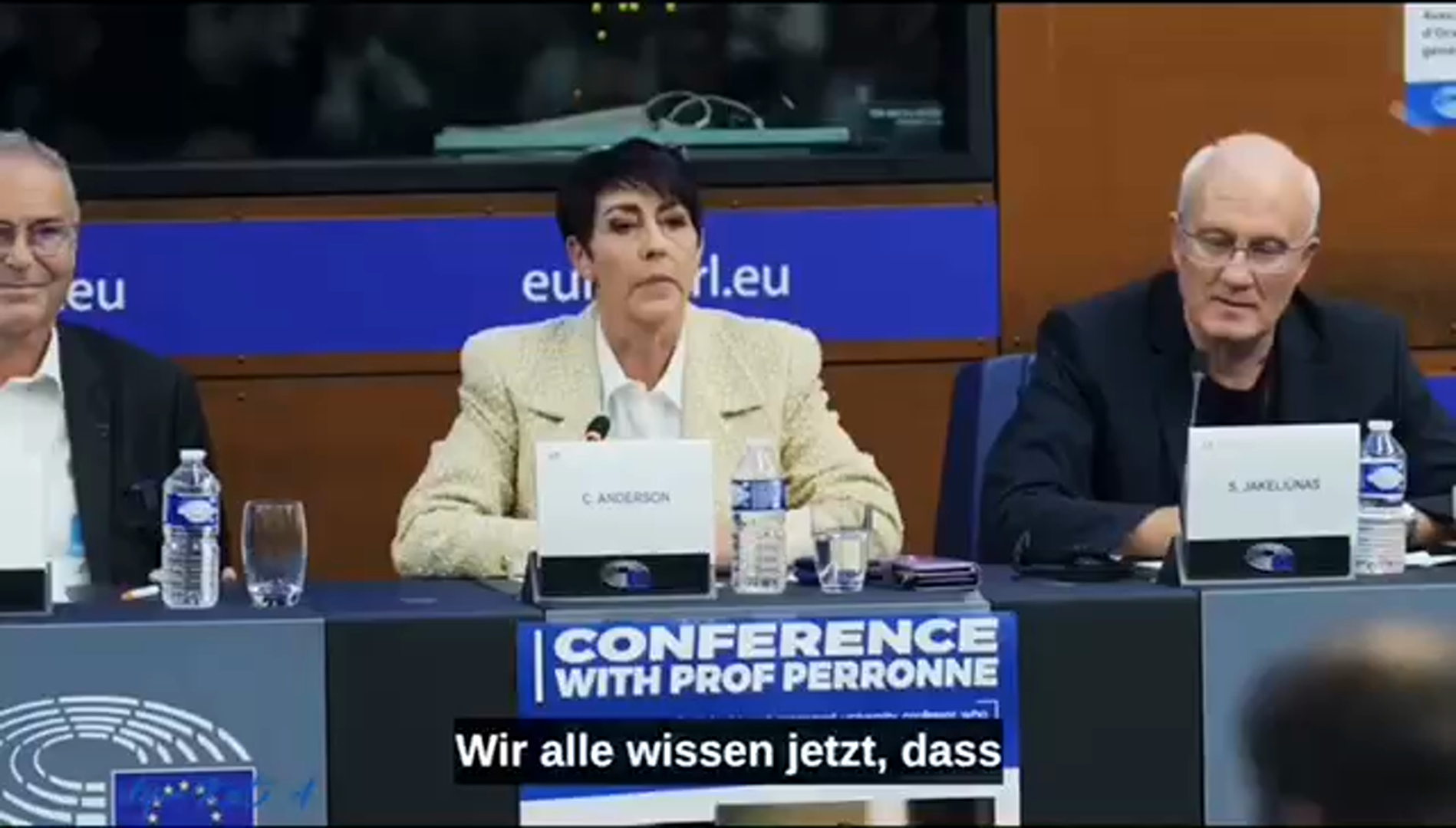 Europe awakens from a nightmare to the ground truth.

“For murder, though it have no tongue, will speak with most miraculous organ.”

From the Editors: Dr. Robert Malone writes the Substack column Who is Robert Malone. The proper answer to that question—“Who Is Robert Malone?”—is one of the most important of the early twenty-first century. If you get the answer wrong, and give credibility to absurd, unscientific, unethical, or brain-dead attacks on him from The New York Times or Alex Berenson, you will miss the story of one of the heroes of our time. More importantly it will reduce you and your family’s chances of getting out of the next few years and the “Great Reset” alive.

As a world-renowned vaccinologist and inventor of the core technology of the mRNA and DNA vaccines, Malone has brought unrivaled scientific credibility and attention to the dangers of the covid-19 vaccines, saving countless lives. As a physician trained at the Northwestern University medical school and a former professor of pathology and surgery at University of California, Davis and the University of Maryland, he sat with the eye of a clinician and scientist on the NIH ACTIV Clinical working group committee focused on developing clinical trials for ivermectin and other drugs repurposed as covid-19 treatments, and called out the usefulness of ivermectin and the uselessness of the bureaucracy. As a scientist-entrepreneur—with his wife, Jill Glasspool Malone, Phd—of a consulting and analytics firm “specializing in biotechnology and clinical trials development,” with years of clinical-trial research experience in big government contracts, he has blown a long, loud whistle about the startling corruption of the federal public-health agencies and their unethical, catastrophic covid decision-making. As leader of more than 16,000 men and women in the International Alliance of Physicians and Medical Scientists, he forged “The Declaration of Rome” that made an early stand against mandated childhood mRNA vaccines.

One of the turning points that persuaded Malone to leave a comfortable, largely private life with his high school sweetheart on their beloved Virginia horse farm to lead the fight of our age was his shocking experience as guest editor of the prestigious scientific journal, Frontiers in Pharmacology. He was chosen to edit a special issue on “The Use of Available Medicines in COVID-19.”

Recognizing the potential world-saving impact of Dr. Pierre Kory’s pioneering research on more than a dozen clinical trials globally showing profound efficacy of ivermectin as a covid treatment, Malone during the Christmas holiday of 2020 commandeered a rapid peer-review of Kory’s paper by senior scientists at the FDA, DOD, and NIH, and an ICU specialist in New York City. It was just days after Kory’s December 8 testimony on ivermectin to the U.S. Senate garnered eight-million-plus YouTube views.

The peer reviewers approved the publication of Kory’s paper in Frontiers in Pharmacology. They backed his conclusion urging that public health authorities “globally and systematically deploy ivermectin in the prevention and treatment of COVID-19.”

Alternative history spoiler alert: If that publication had gone through, the pandemic would have ended then and millions of deaths would have been prevented.

But in an unprecedented and fraudulent maneuver, a higher-up editor stepped in to stop publication of a properly peer-reviewed paper, based on a complaint from an anonymous reviewer. Malone and the entire magazine staff quit in protest. It was an early step in Malone’s growing awareness of “authoritarian control by governments that are being manipulated by large corporations (big finance, big pharmaceutical, big media and big technology)” that “influenced my changing world view.”

“I used to believe that the FDA, NIH, and CDC were working for the people, not big pharma. I thought that if we could just re-purpose already known, safe drugs for emerging infectious diseases, we could quickly find ways to reduce the death rate. I thought that drug and vaccine development were regulated by the Federal government for the common good.

What I have learned over the last two years is that regulatory capture of the federal government has warped and shaped the work of Congress and Federal agencies to such an extent that they no longer represent what is in the best interests of the nation, the world, and humanity.

The more I have expressed data-based concerns about what is happening with the vaccines, the US Federal and WHO responses, the more I have been censored, defamed, and subjected to various forms of character assassination by big tech and legacy media. I am not alone in being targeted. Mainstream media has attacked and censored me and other prominent physicians/scientists who do not recite the governmental narrative. This has been developed into a standard process and deployed worldwide as a technique for suppressing physician dissent—quite literally hunting physicians deemed guilty of thought crimes (such as questioning vaccine safety and effectiveness) or of the “sin” of treating patients with lifesaving drugs in an outpatient setting.

What is happening is not right, it is not proper and it is not fair.

So, let get down to fixing it.”

Teresa and I are proud to publish Dr. Malone. In today’s story, he highlights an encouraging sign that the truth is emerging. With apologies to Shakespeare, “Mass murder will out.”—MC.

Christine Anderson, a member of the European Parliament, represents the Alternative for Germany (AfD), which is labelled as a “populist political party” in Germany. AfD is known for its opposition to the European Union, as well as the open border/immigration to Germany policies which the EU mandates. As she does not believe in open borders, Christine Anderson is labelled with such terms as “far-right,” and “anti-Islamic.” Near as I can tell, these are just more propaganda talking points by Wiki and their ilk.

The short clip above is important because Christine Anderson is getting at an important point, which must be researched. There is evidence that Pfizer and Pfizer’s CEO Albert Bourla have corrupted government leaders worldwide. That this corruption is deep and wide.

“The people have been lied to. It was a gigantic lie. And on this lie, everything that governments, especially in the Western democracies did to infringe on people’s rights, to take away their freedom, to lock them in their homes, imposing curfews, all of this was based on that gigantic lie.

Ursula von der Leyen, EU Commission president is now under a lot of pressure, and rightly so. The people have a right to know what went on in these contracts with her exchange of SMS with CEO Pfizer, Bourla. The people need to know who they can hold responsible and accountable for whatever may have gone on behind the scenes. Things are changing now, their house of cards is tumbling down, and it is doing so rightfully.

And you know what? One more thing though, I am sick and tired of being called a cov-idiot. And I’d much rather be a cov-idiot than being a gov-idiot, because that’s what all these people that blindly trusted their governments turned out to be. And I will say it again, it was never, never, ever about public health, it was never about breaking any waves, it was always about breaking people. But, and that’s the good news, they failed. It didn’t work. And that I am very proud of, and I’m proud of the people that I am so honored to be allowed to represent. And I will continue to do just that. Thank you very much.”

Leyen had been secretly communicating with the CEO of Pfizer about the purchase of COVID-19 vaccines via text messages. In early 2022, a journalist requested for copies of these texts and the European commission rejected the request. This has opened the door for widespread speculation of malfeasance and corruption.

European Commission president Ursula von der Leyen said in July that she is no longer in possession of text messages. The EU’s ombusman has determined that this is malfeasance.

“The EU is elitist, aloof and distant from the citizens. With its tentacles, it takes a stranglehold on the sovereignty of the European nations and dictates to the citizens in every detail how they have to behave.

I want an honest and free Europe of free people and not a construct of political elites. I consider putting a stop to these false elites here in Brussels and Strasbourg to be the most urgent task in my political work.”