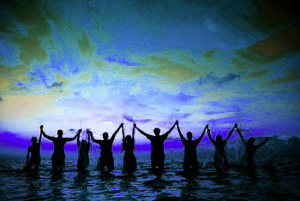 In Prepare for Change, the Event Support Groups (ESG) represent the masculine side of the local groups, and the Sisterhood of the Rose (SOTR) groups are the feminine side. While the SOTR is here to channel and anchor energies of calm, unity, softness, receptivity, through meditations and other kinds of Lightwork, the ESGs are here to take direct actions into society’s organization.

They are the ones to take initiative, to have the vision, to be builders, to give things shape. While the SOTR holds the space for the necessary calm, silence, stillness we need in order to establish connection, the ESG generate movement and action. Both of these groups need to be in perfect balance and to co-operate with each other for things to unfold in their highest potential. Balance and connection of masculine and feminine energies is central in creating a world of harmony.

Everybody has a capacity and a potential to be a leader in various moments. Everybody also has a capacity to follow and support the initiatives of others (as long as they it resonates with us), which is the feminine energy much needed for creation. We will need to respect both aspects in ourselves and in others for the highest potential to unfold.

The leadership, masculine quality, is a natural part of harmonious life. Leadership is an individual who has an idea and simply invites others to manifest it and takes the necessary steps to organize it. It’s as simple as that. It has nothing to do with behaving like a boss, superior, and telling others what to do. Leaders do not tell others what to do, they do the job as much as they can, and invite others, respecting their free will. Invitation is a key word here. True leadership requires balance, between initiative and receptivity.


Here are some of the critical tasks of ESGs before, during, and after the Event :