Prepare For Change
Home Financial The Bank of God 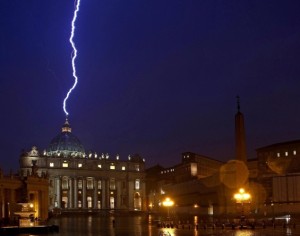 The Vatican City is a landlocked sovereign city-state whose territory consists of a walled enclave within the city of Rome.

Encircled by a 2-mile border with Italy the city covers just over 100 acres, making it one-eighth the size of New York’s Central Park.

Vatican City is governed as an absolute monarchy with the Pope as its head. And is one of the most sacred places in Christendom. The Vatican mints its own Euros, prints its own stamps, issues passports and license plates, operates media outlets and has its own flag and anthem.

The Vatican also has its own bank.

The Vatican bank serves thousands of Catholic charities, religious orders and dioceses around the world, in addition to roughly 500 people living in the tiny city-state. It has some 33,400 accounts and about $8 billion in assets.

Yet the Vatican bank’s murky finances, which has been suspected for years of being a channel for the laundering of mob profits, perhaps has a skeleton in the closet.

In this movie we look into financial scandals that have always plagued the Bank of Vatican.