Prepare For Change
Home Disclosure US going after Russia, Venezuela as it loses global influence – Maduro... 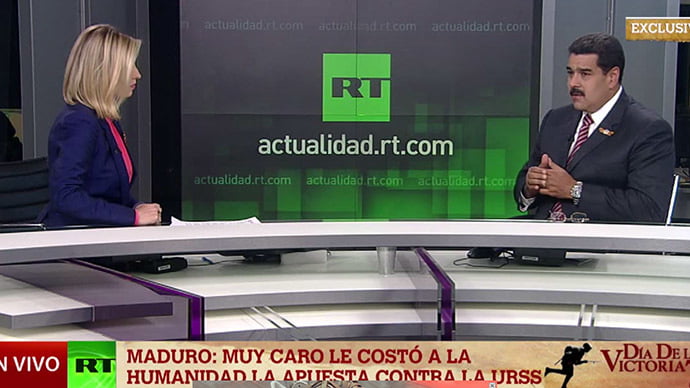 Washington is losing its weight in the international arena and this makes it target Russia and Venezuela, as well as attempt to curtail China’s growth, Venezuelan President Nicolas Maduro told RT’s Spanish-language channel in an exclusive interview.
TagsAnniversary, Russia, Politics,China, USA, WWII, Venezuela

In March, the US declared Venezuela a threat to its national security which is usually the first step in starting a US sanctions program. Maduro said the country found great support in Latin America after this attack, which forced Washington to backpedal on its pressure.

“All those countries stood against it even before the Summit of Americas started exactly a month ago and demanded that [US President] Barack Obama repeal the executive order that declared Venezuela a threat. It was very convincing,” he said. “President Obama realized that Venezuela was not alone, that it would have help and support. We were united in our multiplicity.”

The Venezuelan president, who continued a policy of opposing the influence of the US in Latin America that his predecessor Hugo Chavez started, believes that Washington is unnerved by the growth of political and economic power in countries it does not control.

“The US see they are losing influence and it makes them target countries like Russia to find a way to stop them. The US creates barriers and problems for such countries. They try to hamper their natural development. So they continue their attacks on peaceful countries like Venezuela and oppose the development of powerful nations like China,” he said.

According to Maduro, nations can successfully withstand American pressure with enough determination, as evidenced by the example of Cuba. After decades of economic blockade and sanctions, Washington sought reengagement with the Caribbean nation.

“Barack Obama was brave enough to admit in his December 17 speech that the blockade and oppression of Cuba failed. But he was also speaking from an imperialist point of view… Now they are trying to influence Cuba,” he said.

“I am certain that, sooner rather than later, the US will go the way the British empire did 70 years ago. It used to be a powerful empire that ruled entire regions of Asia, Latin America, the Caribbean and Africa for 300 years. They ruled the world. But then they had to adopt to new historic circumstances,” Maduro said. “We believe the same thing will happen to America and that they would have to go through a series of conflicts.”

Maduro is sure Europeans are hurting themselves again by alienating Russia, which now turns towards Asia for strategic partnership. The Venezuelan leader was among those who visited Russia this weekend to participate in V-Day commemorations.

“I arrived here with a good purpose, to be with the Russian people in this hour of great challenges. I am certain that peace will prevail,” Maduro told RT.

While leaders of countries like China, India, Vietnam, Serbia and Cuba came to Moscow for the occasion, many European leaders allied with the US chose to reject their invitations. Maduro says they succumbed to pettiness.

“It was probably a case of short-sightedness on the part of today’s western leaders,” he said. “It’s about conspiring and petty grudges… But humanity has enough strength and values not to allow this pettiness to win.”

The Venezuelan leader said similar notions were prevailing in Europe when the rise of politicians like Germany’s Hitler, Italy’s Mussolini and Spain’s Franco was ignored in other nations in the hope that these anti-communist regimes would target the Soviet Union.

“Europe partially turned a blind eye and bet on the creation of an insane monster who would finish off the Soviet Union. It was apparent what would that bring on their heads. Hitler had been supported at the time by the bourgeoisie, by financiers in all of Europe, not just Germany, and even in the US… Humanity had to pay a great price for that bet,” he said.