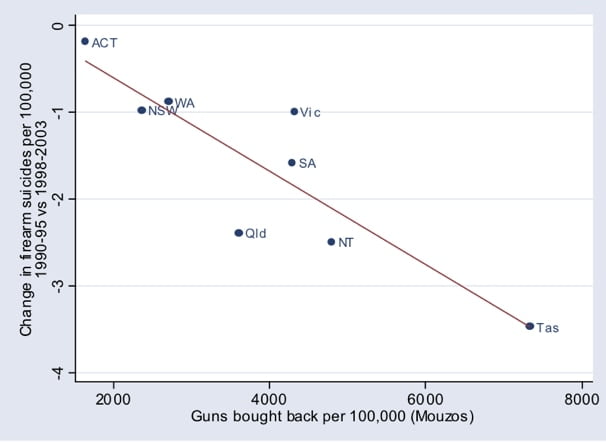 or a related link here:  http://louderwithcrowder.com/obama-praises-australias-gun-ban-the-actual-results/

John Howard, who served as prime minister of Australia from 1996 to 2007, is no one’s idea of a lefty. He was one of George W. Bush’s closest allies, enthusiastically backing the Iraq intervention, and took a hard line domestically against increased immigration and union organizing (pdf).

But one of Howard’s other lasting legacies is Australia’s gun control regime, first passed in 1996 in response to a massacre in Tasmania that left 35 dead. The law banned semiautomatic and automatic rifles and shotguns. It also instituted a mandatory buy-back program for newly banned weapons.

On Wednesday, Howard took to the Melbourne daily the Age to call on the United States, in light of the Aurora, Colo., massacre, to follow in Australia’s footsteps. “There are many American traits which we Australians could well emulate to our great benefit,” he concluded. “But when it comes to guns, we have been right to take a radically different path.”

So what have the Australian laws actually done for homicide and suicide rates? Howard cites a study (pdf) by Andrew Leigh of Australian National University and Christine Neill of Wilfrid Laurier University finding that the firearm homicide rate fell by 59 percent, and the firearm suicide rate fell by 65 percent, in the decade after the law was introduced, without a parallel increase in non-firearm homicides and suicides. That provides strong circumstantial evidence for the law’s effectiveness.

The paper also estimated that buying back 3,500 guns per 100,000 people results in a 35 to 50 percent decline in the homicide rate, but because of the low number of homicides in Australia normally, this finding isn’t statistically significant.

Tasmania did a quicker buyback, and saw a large decline in suicides, while the Australian Capital Territory did a slower buyback, and a slower decline. The study fits with a pattern of research in the United States that finds a strong correlation between gun possession and suicide rates, as University of Chicago public health Professor Harold Pollack details here.

Other studies are more hesitant to draw conclusions about homicides, but generally agree that the law did a lot to reduce suicides. A study from Jeanine Baker of the Sporting Shooters Association of Australia and Samara McPhedran, then of the University of Sydney, concluded (pdf) that suicide rates declined more rapidly after the law’s enactment, but found no significant result for homicides; Leigh and Neill argue (pdf) that this paper’s methodology is deeply flawed, as it includes the possibility that fewer than one death a year could occur. David Hemenway at the Harvard School of Public Health noted (pdf) that the Baker and McPhedran method would find that the law didn’t have a significant effect if there had been zero gun deaths in the year 2004, or if there weren’t negative deaths later on. The authors, he concluded, “should know better.”

Another paper (pdf) by  Wang-Sheng Lee and Sandy Suardi, looks at the firearm death rates in Australia over time and found no  “structural breaks” associated with the law. But Leigh and Neill note that, because of the large number of factors affecting gun violences, real changes due to the law could potentially not show up as “breaks.”

“When policies have even modest lags, the structural breaktest can easily miss the effect,” Hemenway explains. “It can also miss the effect of the policy that occurs over several years.”

Given those flaws in the studies showing no effect, the Leigh and Neill study appears the most reliable of the ones conducted. It seems reasonably clear, then, that the gun buyback led to a large decline in suicides, and weaker but real evidence that it reduced homicides as well. Such a buyback isn’t in the cards in the U.S. anytime soon — an equivalent buyback here would entail the destruction of 40 million guns — but the data suggest  Howard might have a case.