In Cobra’s latest update he asked for whistleblowers to come forward and share their truth in the alternative media. It may very well be the case that some major areas of truth could reach mainstream media in the very near future. Many who follow this site and its associated sites are all too well aware of the many areas of deception that will come to light for humanity after The Event. It is my belief that it would be preferable for mankind and I have no doubt preferable to the ‘Company of Heaven’ that 1or 2 main areas of truth were to reach mainstream media prior to The Event. I am not going to go into any speculative guesswork as to exactly which area of truth will / may reach mainstream first but be clear that I do mean that it will be spectacular in nature and not merely some type of corruption exposure connected to some company or other for example.

We Need to be Ready to Support People Shortly

As I already said mankind would definitely benefit bigtime by some major truths reaching mainstream soon. This would definitely pave the way forward for even greater lies and deception to be revealed at the time of The Event. Major lies and deception being proven in mainstream media to people worldwide would create discussions that awaken so many more of humanity and this will definitely help people to accept the major changes that need to / will take place at the time of The Event.
Whatever major truth reaches mainstream in the near future you can be sure that lightworkers all over this planet will be busy supporting people when their world starts to fall apart.

Our ego likes to have things ordered and safe in little boxes with labels like ‘Science Proves This’, ‘Medical Research has Proven that’, ‘Pentagon Leaders Claim that’, ‘Space Research Proves that’, ‘My Research of History Shows that’, ‘My Priest/Imam Claims that this is the Correct Interpretation of the Bible / Qur’an, and so forth : We as humans need honesty surrounding us in our relationships and in our understanding of our reality so that we can find our place in that reality. When we are confronted with convincing evidence that there was no basis for the truth we so strongly believed in our world has a tendency to fall apart temporarily until we can fit the pieces of the puzzle back together again with some new realisations and deductions. This confrontation of truth can be a huge blow to the ego unless we stand on the very solid ground of knowing and understanding that we are indeed spiritual light beings and that we have the ability to create our own reality.

These coming major truths reaching mainstream are a necessary part of the awakening and enlightenment process of humanity on the journey of discovering who we truly are.
Cobra mentioned that when we stand up for truth, when we live in truth more Light flows through our being; “telling the truth increases the Light flow through their energy system.”
He also mentioned this arrival on the mainstream media of more truth “The process of disclosure is speeding up. Some intel that was previously limited to alternative media is hitting mainstream….. http://humansarefree.com/…/the-russian-media-is-talking-abo…
…….. Release of reliable intel is one of crucial steps in the process of planetary liberation.”

I am reminded when I write this that Cobra informed us at least a year ago that the Jesuits along with the Rothschild Illuminati faction were planning to throw the Rockefeller faction overboard. You can be sure that this war behind the scenes is in full swing and this process could very well bring major truth out into the open very soon.

Finally be prepared that you will no doubt be called upon to provide solace, support, and understanding in a patient, kind and generous way very soon to others around you when their world starts to fall apart. Let’s avoid any ego tendencies to say “I told you so” when that day arrives. And some final words of advice from Cobra;
“Energies in the second half of September are expected to be quite intense, although the Light forces are not expecting any drastic changes within that timeframe. Stay alert, but grounded and calm. Victory of the Light!” 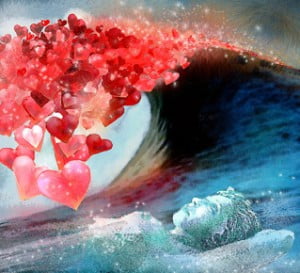 The Tsunami Wave of Love – the Galactic Wave of Love has been penetrating us wave after wave for several years now preparing us for the process of our Ascension, our process of becoming 5th dimensional in nature. The Waves of energy reaching us now at ever increasing intensity and now in very close proximity to one another will be felt / experienced on many different levels. One of those Waves will reach us at the end of this month and you can be sure that your experiences on those days physically; emotionally etc. will be a guide to how you might experience The Event energies. However the energies we experience at the time of The Event might very well be 3 – 4 times stronger. Like Cobra says on ‘one’ of those incoming galactic waves The Event signal will go forth from the ONE and the veil will be no more and a phase of rapid change will be initiated.

PS: I intend to write an article in the near future that has the aim of supporting peoples understanding of just how the physical – emotional – spiritual experiences will/might be felt at the time of The Event.