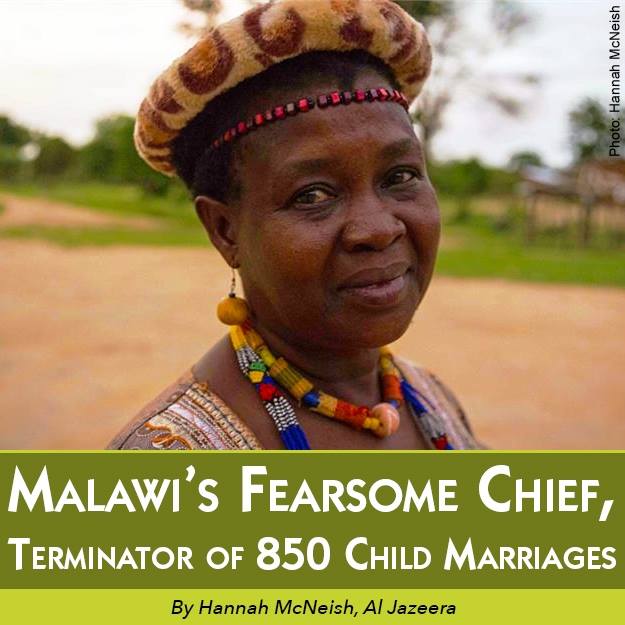 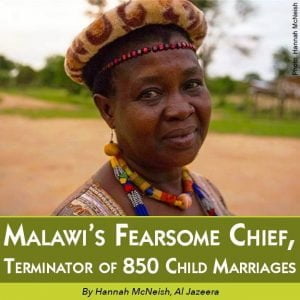 A Malawi chief has annulled over 850 child marriages over the past three years and sent the children back to school! Senior Chief Inkosi Kachindamoto of Dedza applied Malawi’s new laws against underage marriage to the marriages, stating “I don’t want youthful marriages, they must go to school. No child should be found loitering at home or doing household chores during school time.” She has faced resistance in her quest to abolish the traditional practice, including death threats, but Kachindamoto is committed to her vision of ending Malawi’s cycle of poverty through education. “I don’t care, I don’t mind [about the threats,]” she says. “We can talk, but these girls will go back to school.”

Malawi has one of the highest child marriage rates in the world, with half of all girls married before they turn 18. According to Reuters, “Early marriage not only deprives girls of education and opportunities, but also increases the risk of death or serious childbirth injuries if they have babies before their bodies are ready. Child brides are also at greater risk of domestic and sexual violence.” When girls leave school early to get married, they also lose vast earning potential; according to UNICEF, “studies from a number of countries suggest that an extra year of schooling will increase a woman’s future earnings by about 15 percent.”

In addition to fighting child marriage, Kachindamoto has also banned the practice of sending girls to sexual initiation camps to prepare them for marriage. Girls as young as seven have been sent to these camps which claim to “cleanse” the girls through initiation rites but reportedly girls are often taught “how to please men” and some girls are forced to have sex with their teachers to graduate. In seeking to put an end to the practice, Kahindamoto says, “I said to the chiefs that this must stop, or I will dismiss them.”

All told, Kachindamoto says she has annulled over 850 marriages, and, when parents can’t afford to send their daughters to school, she often pays for girls’ school fees out of pocket or finds sponsors to cover the costs. She’s also focused on providing role models to show local girls why they should stay in school. Last year, she had several female Members of Parliament come to her rural schools, inspiring many girls in the community to study English, the language used in Parliament. As Kachindamoto asserts, “If they are educated, they can be and have whatever they want.”

Congratulations to Chief Kachindamoto for her decisive action against child marriage and in favor of education! To read more about her quest to end child marriage on Al Jazeera, visit bit.ly/1SmhXRe

In Yemen, Nujood Ali, a former child bride and an anti-child-marriage advocate, also speaks on behalf of the girls who are promised in marriage at shockingly young ages. To read about her, check out “I Am Nujood, Age 10 and Divorced” for ages 15 and up at http://www.amightygirl.com/i-am-nujood

For an excellent book full of ideas on how you can help empower girls and women around the world — including helping them pursue an education — check out “100 Under $100: One Hundred Tools for Empowering Global Women” at http://amzn.to/1H9CoRl

To learn more about how girls and women are fighting back against oppression and transforming their communities, we highly recommend “Half the Sky: Turning Oppression into Opportunity for Women Worldwide” at http://www.amightygirl.com/half-the-sky and the accompanying documentary, for ages 13 and up, at http://www.amightygirl.com/half-the-sky-documentary

And, for many books for adult readers about trailblazing women who have fought for greater equality and justice, check out our recent blog post, “Celebrating Mighty Women: 50 Biographies for Adult Readers,” at http://www.amightygirl.com/blog?p=11684