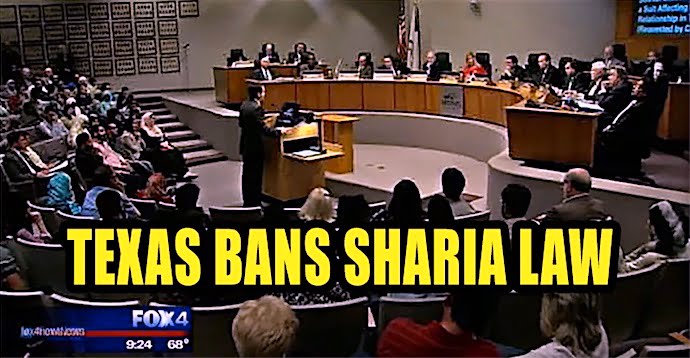 [Eitors Note: Globalization is served by the ideas of the Elite Agenda, which wants to use concepts such as “diversity” to give any belief an equal footing before the law, even if it is contrary to local laws and custom, or against natural law. The parties wanting to have Sharia Courts, disrespect US Constitutional Law, and feel that obeying it would amount to embracing “hatred, fear and bigotry”. So if equal rights for women and due process for criminal charges are inconvenient for some immigrant groups, they can ignore them.  And there are those in Congress that want to enable this!

Liberals of all political persuasions no longer believe in God or natural truth, seeing any belief or creed as equal, thinking that those groups have a right to their own way of thinking. Maybe they should go to Saudi Arabia and try to practice this, they would soon experience intolerance of the most severe sort. They are actually embracing the idea that Wahhabi practices should be given equal footing with US Law.

The Elite have sponsored the spread of radical Islam by refusing to identify the doctrines of Wahhabi, (a radical misinterpretation of Islam used by the Saudis to maintain themselves in power) as the source of it, and pretending that all Islam is the same. In other words, you can’t reject the head choppers from Saudi Arabia without rejecting the peaceful Shia or Sunni muslims at the same time. Sharia Law, like ecclesiastical law belongs within its religious context and attempting to use it as a substitute for US law is a Globalist scam meant to undermine the rule of nations by their own laws.]

The first Islamic Sharia Court in the U.S. just got some very bad news, and Muslims are not happy.

In a close 5-4 vote, the city of Irving ruled to back the Texas state bill banning foreign law from the state. It basically would slam the door in their faces, preventing them from spreading Sharia throughout the country. Now they are accusing the city council of unfairly being targeted.

All four of the “voluntary” court’s lawyers were unlicensed in the state of Texas, a third degree felony. Mayor Beth Van Duyne received several phone calls on the matter. It seems that the Islamic Tribunal not only was unlicensed, but they failed to notify the city of their illegal court being operated in city limits. She promised to get to the bottom of it, and she did.

By their own website’s admission, if U.S. law conflicts with Sharia law, “we follow Sharia law.” It also openly admitted separate rules for men and women in their proceedings, discriminating and humiliating women which is against the U.S. Constitution. The Islamic Tribunal also openly declared that they hope will “set a precedence that will be emulated and duplicated throughout the country.”

The more the mayor looked into it, the more it was apparent that they were attempting to establish a foothold using her city. She made a public Facebook post stating that she would back the new Texas law. She states that it was apparent that Zia Sheikh, imam at the Islamic Center of Irving, and the other Imams were “bypassing American courts” to make rulings under Sharia. Sheikh demanded an apology and wanted her Facebook post removed, which stated she would “fight with every fiber of my being” if the group was violating basic rights.

Sheikh says he just “asked her to clarify a statement … which seemed very Islamophobic.”

“She flat-out refused,” he said. “She said, ‘My statement wasn’t inflammatory in any way, shape or form.’” (Dallas Morning News)

Her office then asked for them to support the American Laws for American Courts bill and to abide by the Constitution. Sheikh instead flew off the handle.

“We don’t care about the bill,” Sheikh said. “It’s not going to affect us in any way, shape or form. The bottom line is the foundation of this bill is anti-Islamic.” (Dallas Morning News)

The meeting was filled by Muslims from the Council for American-Islamic Relations, a known terrorist organization. They even tried to paint the vote as Islamaphobia and bigotry.

“This continues efforts by elected officials who seek to score points with their voting base by demonizing Muslims,” Alia Salem, who directs the North Texas chapter of the Council on American-Islamic Relations, told the City Council before Thursday’s vote. She said it had a choice between “diversity” and “hatred, fear and bigotry.” (Dallas Morning News)

The state bill doesn’t even mention Muslims or Islam. It states no specific foreign law. There isn’t even a mention of Sharia. In the end, four Irving council members voted to oppose supporting the Texas bill — John Danish, Allan Meagher, Joe Putnam and Dennis Webb. Danish, a Muslim council member, got up and addressed the crowd of mainly Muslims before casting his no vote.

Fortunately, despite the intimidation tactics by CAIR and the Islamic Tribunal, five of the counsel members saw right through it for what it is — the attempt to establish Sharia law, just like their website says, on American soil.