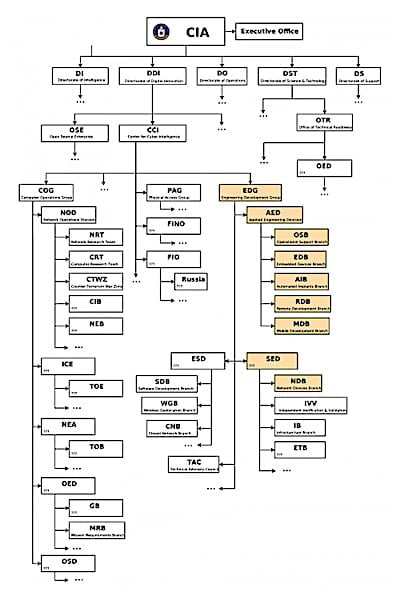 Facebook
Twitter
Pinterest
WhatsApp
ReddIt
Linkedin
VK
Email
Telegram
Viber
Print
LINE
Tumblr
Mix
Digg
Naver
NOTE:  This information is important for all who use computers and do not want them to become weapons against us. What you read here tells that they have the ability to listen to us through almost everything we have connected to the Internet, which is seen by the Covert Intel groups as “public information” and they feel entitled to use it for any purpose they see fit.
I suggest disconnecting your Internet when not in use.  Just unplug the feed into the router…

WikiLeaks has published what it claims is the largest ever release of confidential documents on the CIA. It includes more than 8,000 documents as part of ‘Vault 7’, a series of leaks on the agency, which have allegedly emerged from the CIA’s Center For Cyber Intelligence in Langley, and which can be seen on the org chart above, which Wikileaks also released:

A total of 8,761 documents have been published as part of ‘Year Zero’, the first in a series of leaks the whistleblower organization has dubbed ‘Vault 7.’ WikiLeaks said that ‘Year Zero’ revealed details of the CIA’s “global covert hacking program,” including “weaponized exploits” used against company products including “Apple’s iPhone, Google’s Android and Microsoft’s Windows and even Samsung TVs, which are turned into covert microphones.”

WikiLeaks tweeted the leak, which it claims came from a network inside the CIA’s Center for Cyber Intelligence in Langley, Virginia.

Among the key topical revelations is that the CIA can engage in “false flag” cyberattacks which portray Russia as the assailant. Discussing the CIA’s Remote Devices Branch’s UMBRAGE group, Wikileaks’ source notes that it “collects and maintains a substantial library of attack techniques ‘stolen’ from malware produced in other states including the Russian Federation.

“With UMBRAGE and related projects the CIA cannot only increase its total number of attack types but also misdirect attribution by leaving behind the “fingerprints” of the groups that the attack techniques were stolen from. UMBRAGE components cover keyloggers, password collection, webcam capture, data destruction, persistence, privilege escalation, stealth, anti-virus (PSP) avoidance and survey techniques.”

But perhaps what is most notable is the purported emergence of another Snowden-type whistleblower: the source of the information told WikiLeaks in a statement that they wish to initiate a public debate about the “security, creation, use, proliferation and democratic control of cyberweapons.”  Policy questions that should be debated in public include “whether the CIA’s hacking capabilities exceed its mandated powers and the problem of public oversight of the agency,” WikiLeaks claims the source said.

The FAQ section of the release, shown below, provides further details on the extent of the leak, which was “obtained recently and covers through 2016”. The time period covered in the latest leak is between the years 2013 and 2016, according to the CIA timestamps on the documents themselves. Secondly, WikiLeaks has asserted that it has not mined the entire leak and has only verified it, asking that journalists and activists do the leg work.

Among the various techniques profiled by WikiLeaks is “Weeping Angel”, developed by the CIA’s Embedded Devices Branch (EDB), which infests smart TVs, transforming them into covert microphones. After infestation, Weeping Angel places the target TV in a ‘Fake-Off’ mode, so that the owner falsely believes the TV is off when it is on. In ‘Fake-Off’ mode the TV operates as a bug, recording conversations in the room and sending them over the Internet to a covert CIA server.

As Kim Dotcom chimed in on Twitter, “CIA turns Smart TVs, iPhones, gaming consoles and many other consumer gadgets into open microphones” and added ” CIA turned every Microsoft Windows PC in the world into spyware. Can activate backdoors on demand, including via Windows update”

Okay, then! Now we know… almost every connected device can be used to bug you…