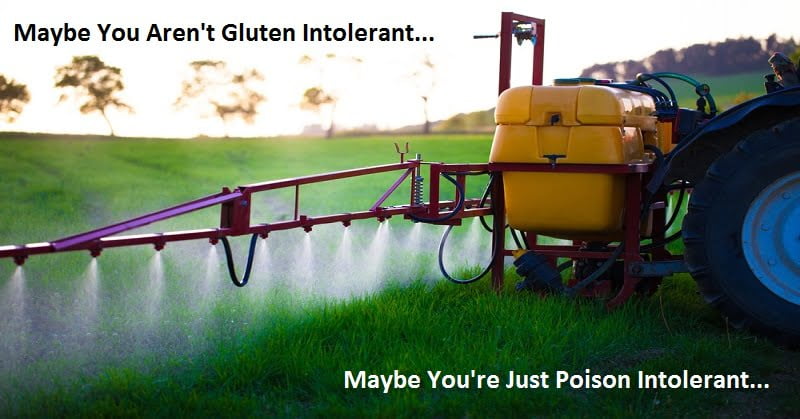 Over the past couple of years, I had the unpleasant experience of having bloodwork done to confirm that I am gluten intolerant, only to have it come back and say, “Nope, you’re just crazy.” The same thing happened to my good friend Melissa Melton, who was terribly ill before she cut wheat out of her life. It’s happened to scores of other people, who pass the test for the anti-gliadin antibodies but still know that their health issues directly correlate with what they eat.

Now we may know why. The tests were right. I’m not gluten intolerant.  I’m poison intolerant.

I read a mind-blowing article last night that put it all together for me. (Please go read the entire piece by Sarah, the Healthy Home Economist.)

“Standard wheat harvest protocol in the United States is to drench the wheat fields with Roundup several days before the combine harvesters work through the fields as withered, dead wheat plants are less taxing on the farm equipment and allows for an earlier, easier and bigger harvest.”

Pre-harvest application of the herbicide Roundup and other herbicides containing the deadly active ingredient glyphosate to wheat and barley as a desiccant was suggested as early as 1980.  It has since become routine over the past 15 years and is used as a drying agent 7-10 days before harvest within the conventional farming community.

According to Dr. Stephanie Seneff of MIT who has studied the issue in depth and who I recently saw present on the subject at a nutritional Conference in Indianapolis, desiccating non-organic wheat crops with glyphosate just before harvest came into vogue late in the 1990′s with the result that most of the non-organic wheat in the United States is now contaminated with it.  Seneff explains that when you expose wheat to a toxic chemical like glyphosate, it actually releases more seeds resulting in a slightly greater yield:   “It ‘goes to seed’ as it dies. At its last gasp, it releases the seed.”

How horrifying is it that they douse this stuff for human consumption with the most toxic, prevalent herbicide around, an herbicide which has been linked to all sorts of problems, just days before the harvest? That stuff doesn’t get removed – it gets milled in with the wheat and lurks in your bags of flour, your loaves of bread, and your desserts.

This could also explain why some people who have terrible gluten symptoms are able to eat products made from organic Einkorn wheat.  It may not be that it’s heirloom Einkorn – it could just be that it hasn’t been doused in glyphosate.

Modern farming practices are killing us

. Here’s a little rundown on glyphosate:

The first study found that glyphosate increases the breast cancer cell proliferation in the parts-per-trillion range.

An alarming new study, accepted for publication in the journal Food and Chemical Toxicology last month, indicates that glyphosate, the world’s most widely used herbicide due to its widespread use in genetically engineered agriculture, is capable of driving estrogen receptor mediated breast cancer cell proliferation within the infinitesimal parts per trillion concentration range.

Another study found that consumption of glyphosate causes intestinal and gut damage, which opens the door to numerous human diseases, such as diabetes, gastrointestinal disorders, heart disease, obesity, autism, Parkinson’s and Alzheimer’s

However, another classification of allergy-type food is emerging and getting recognized for adverse effects on the human intestinal tract and gut. Those foods are genetically modified organisms known as GMOs or GEs. There is scientific research indicating intestinal damage from GMO food and the article “Glyphosate’s Suppression of Cytochrome P450 Enzymes and Amino Acid Biosynthesis by the Gut Microbiome: Pathways to Modern Disease” discusses how the inordinate amount of pesticides sprayed on GMOs leaves residues in GMO crops that, in turn, are being traced to modern diseases.  (source)

Glyphosate is the most widely used herbicide in the world.  According to the EPA, at least 208 million tons of Roundup were sprayed on GE crops, lawns and roadsides in the years 2006 and 2007. In 2007, as much as 185 million pounds of glyphosate was used by U.S. farmers, double the amount used just six years ago.

A 2009 study found that Americans use about 100 million pounds of glyphosate annually on their lawns and gardens. It’s safe to assume all these number are much higher now. Why? Because GE crops are now being invaded by new strains of herbicide-resistant “superweeds” requiring higher and higher doses of poison.

Glyphosate also endangers the environment, destroys soil and plants, and is linked to a host of health hazards. The EPA’s decision to increase the allowed residue limits of glyphosate is out of date, dangerous to the health of people and the environment and scientifically unsupportable. (source)

Nearly all of the symptoms we chalk up to gluten intolerance can also be related to glyphosate exposure.  This horrific little farming shortcut may have created an epidemic across the country.

Just last week I picked up a loaf of organic sourdough bread to serve with some beef stew.  I was hesitant but astonished when I didn’t suffer abdominal pain, bloating, and digestive upset.  I thought, “Yay!  I ate bread and didn’t die!”

Sarah’s article blew my mind, because when I read it, all of the inconsistencies with my own gluten issues began to make sense. It explains why I can eat the fancy Italian pasta that a friend sent as a gift. It explains why the odd baked good from the organic bakery doesn’t make me sick. It explains the blood test that says I don’t have a problem with gluten, even though my gut says that I do have a problem.

It’s time to say no to Big Food. Vote with your wallet and forgo eating anything containing poisoned wheat. Either skip the wheat products entirely or choose organic wheat products.

Perhaps our family diet can get a little bit broader now. It would be far less expensive to buy a bag of organic flour than the gluten free flour that we use for baking, pancakes and thickening stuff.

Maybe the bloodwork was right. Maybe we aren’t actually gluten intolerant at all.

Maybe we are just poison intolerant.

This article is reproduced with permission from TheOrganicPrepper. Please check the website out–it’s great and you should honor Daisy Luther’s guidelines for republishing.

Please feel free to share any information from this site in part or in full, leaving all links intact, giving credit to the author and including a link to this website and the following bio. Daisy Luther  lives in a small village in the Pacific Northwestern area of the United States.  She is the author of The Organic Canner and The Pantry Primer: How to Build a One Year Food Supply in Three Months. On her website, The Organic Prepper, Daisy uses her background in alternative journalism to provide a unique perspective on health and preparedness, and offers a path of rational anarchy against a system that will leave us broke, unhealthy, and enslaved if we comply.  Daisy’s articles are widely republished throughout alternative media. You can follow her on Facebook, Pinterest,  and Twitter, and you can email her at [email protected]

MUST READ!!!!!  The Real Reason Wheat is Toxic (it’s not the gluten)

The Gluten Connection: How Gluten Sensitivity May Be Sabotaging Your Health – And What You Can Do to Take Control Now

Wheat Belly: Lose the Wheat, Lose the Weight, and Find Your Path Back to Health

Gluten Intolerance Isn’t Just a Fad: It Can Wreck Your Whole Life

Gluten Intolerance: Is It Just a Fad or Is Today’s Wheat Really Toxic?