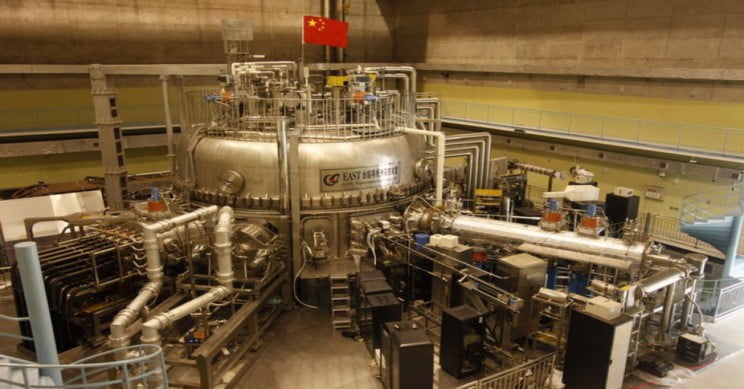 An artificial sun that does the job better than the real sun itself is in the works, with scientists setting their sights on an ambitious 2020 deadline.

From its plans to harness and enhance its artificial intelligence (AI) capabilities to its vision of a solar highway planned into the not-too-distant future, China is strongly demonstrating its position as a technology trendsetter of the 21st century.

One of the most ambitious and forward-looking plans now involves the development of a magnetic nuclear fusion chamber that generates more heat than the sun. The doughnut-shaped chamber is being developed by a team of scientists based at the Institute of Plasma Physics, part of the Chinese Academy of Sciences.

They announced that the plasma heated inside of their Experimental Advanced Superconducting Tokamak (EAST) magnetic fusion chamber can produce unlimited energy. The plans come only one month after a local Chengdu-based tech company revealed its plans to launch a second moon into space by 2020, another sign of China’s building momentum in the energy sector.

Since the most tangible details began to emerge in 2012, the team has been making steady progress in terms of the energy harnessing capabilities of the reactor, although the project was first given the green-light by the Chinese government in 1998. The older version of the sun simulator revealed just two years ago had a diameter of five meters, heated the plasma inside to temperatures three times the sun’s heat (~50 million Kelvins) which could be maintained for 102 seconds.

Now, in this more efficient iteration–which has exceeded even the scientists’ expectations–they have upped the ante even more: The new reactor developed by the team at EAST stands 11 meters tall, can heat the plasma inside to temperatures six times the sun’s heat (100 million Celsius). Measuring eight meters wide and weighing in at 360 tons, it is not hard to imagine why the Chinese Academy of Sciences is proudly reporting the successful progress of the project.

This development represents a win-win scenario, it seems, for science as well as the energy objectives of the Chinese government. As Australian National University Associate Professor of Physics Matthew Hole explains, “It’s certainly a significant step for China’s nuclear fusion program and an important development for the whole world. The benefit is simple in that it is a very large-scale baseload [continuous] energy production, with zero greenhouse gas emissions and no long-life radioactive waste.”

Another sign of the enormous impact of this development is the endorsement of the work by the International Thermonuclear Experimental Reactor (ITER), the massive multinational initiative that aims to produce the world’s largest magnetic nuclear fusion device. It also sends the message that global energy aims will be a collaborative and cooperative process.

No doubt there is a long list of budgetary and feasibility issues that will need to be addressed to make the project a reality, but China should be commended for embracing a perspective on rising energy demands that involves bold and creative solutions. In these uncertain times, it is vital to continuously produce strategies that anticipate the challenges ahead.