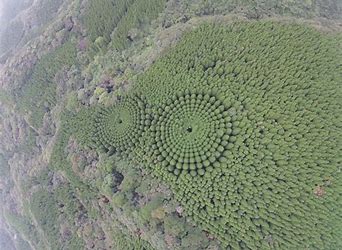 An aerial photograph of a forest in Japan caused a stir on social media last month, as it appeared to show a pair of epic crop circles made out of trees.

A crop circle is an area of flattened crops, typically a cereal crop, which produces a regular, circular pattern that can be viewed from above.

Interest in crop circles is a perennial feature of internet controversy, and many people believe them to be signs of extraterrestrial life or attempts at alien communication. However, the appearance of these circles in a forest near Nichinan in Miyazaki Prefecture, Japan, left even the most avid conspiracy theorists lost for words. These enormous circles, visible from the sky, were not produced by the flattening of cereal crops. Rather, they were grown into the forest itself, and made completely out of trees.

Although it’s tempting to attribute these strange patterns to alien activity, or enterprising hoaxers, the circles did not appear overnight. According to Business Insider, they are the result of a 45-year “experimental forestry” program run by scientists seeking to understand the way in which forests develop. The trees have grown in perfect symmetry.

This Southern Miyazaki District forest is populated by local Obi-sugi cedar trees. In 1974, a team of scientists decided to plant 720 new cedar trees as part of an experiment designed to understand the effects of forest density on tree growth.

The scientists wanted to observe what would happen if they planted trees in close proximity to one another, and how this would affect their growth and development. It was hoped that the results would inform new forestation projects. According to Business Insider, the trees were planted in a sequence of circles, evenly spaced in 10 degree radial increments. The result was a pattern of concentric circles with varying diameter.

The pattern was not chosen for aesthetic reasons, but rather to allow the scientists to easily identify which trees were part of the experiment. The team has been making regular observations over the course of the past 45 years.

The study challenges the prevailing assumption that tree density does not significantly affect growth and development.

The results of the investigation were particularly surprising. As the aerial images show, the trees have grown out in a concave pattern, suggesting that close planting does limit tree growth.

The trees that were placed in the inner circles, with proportionally less space, were significantly smaller than those in the outer rings. The difference in height between the smallest trees at the center of the ring, and the largest at the outer level was more than five meters (16.5 feet). It seems those trees that grew with more space suffered less from competition from other trees, and therefore were able to grow taller and stronger.

Those in the inner rings, however, had limited access to water, sunlight and soil nutrients. The team had expected that this would produce some differences in growth, but the extent of the difference was not anticipated.

Furthermore, this study challenges the prevailing assumption that tree density does not significantly affect growth and development.

However, scientists did not anticipate the beautiful patterns that would be created as a result of the planting scheme. The varying sizes of the trees in the ring create a three-dimensional effect and produce a particularly interesting pattern only when photographed from above.

Indeed, until 2016, observation of the trees was carried out on foot, meaning that the team was unaware of the existence of the crop circles in the forest. However, the development of drone technology meant that in 2016 they were able to see the forest from above for the first time.

This birds-eye view has encouraged the scientists to see the experiment in a whole new light, and these beautiful forest crop circles will now remain exactly where they stand.