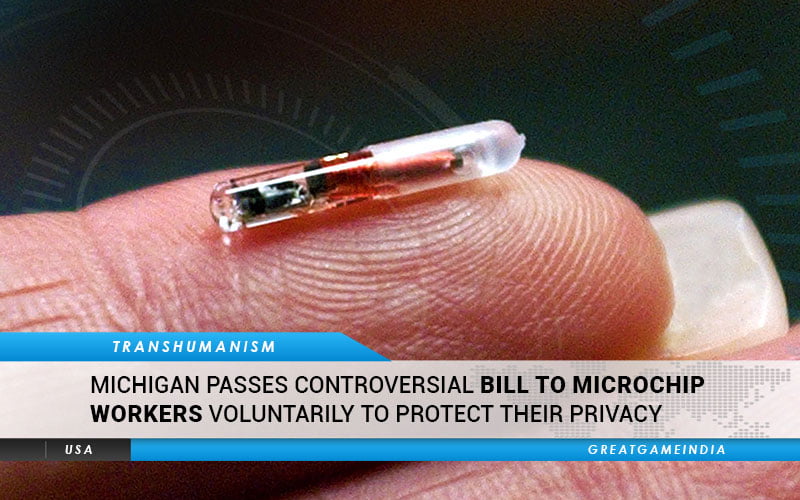 The Michigan House of Representatives has passed a controversial bill to microchip humans voluntarily in the state under the guise of protecting their privacy.

The Microchip Protection Act would allow Michigan employers to use microchipping of their workers with their consent. However, research has shown that RFID transponders causes cancer.

The plan to microchip humans is sponsored by Rep. Bronna Kahle under the guise of protecting the privacy of workers.

The stated objective of the bill is that it will protect the privacy rights of Michigan workers and promote further growth for job providers as it relates to microchipping – a cutting-edge technology on the rise that increases workplace efficiency.

“With the way technology has increased over the years and as it continues to grow, it’s important Michigan job providers balance the interests of the company with their employees’ expectations of privacy.”

“Microchipping has been brought up in many conversations as companies across the country are exploring cost-effective ways to increase workplace efficiency. While these miniature devices are on the rise, so are the calls of workers to have their privacy protected.” – Rep. Bronna Kahle, the Republican who sponsored the bill, said in a press statement.

Radio-frequency identification tags, commonly referred to as microchips, are beginning to seep into the marketplace as new technological devices to help streamline everyday business practices.

The chips, roughly the size of a grain of rice, are implanted into the hands of employees and act as a replacement for I.D. badges, timecards, usernames and passwords for security clearance, and even credit cards.

“Despite this type of technology not quite making its way into our state yet, I wouldn’t be surprised if it becomes a standard business practice statewide within the next few years,” Kahle said.

“We should absolutely take every step possible to get ahead of these devices.”

Under Kahle’s plan, Michigan employers would be able utilize microchipping, but could not mandate employees to have such devices implanted.

Kahle said the measure strikes a good balance between protecting workers’ rights and providing businesses with flexibility to increase efficiency and further grow.

In May, the plan to chip humans globally through a digital ID was exposed in the Italian Parliament.

Also read: Apiject CEO Says Their Will Be At Least 100 Million Doses Ready To Inject Of A Chip Vaccine To The Public

Sara Cunial, the Member of Parliament for Rome denounced Bill Gates as a “vaccine criminal” and urged the Italian President to hand him over to the International Criminal Court for crimes against humanity.

She also exposed Bill Gates’ agenda in India and Africa, along with the plans to chip the human race through the digital identification program ID2020.