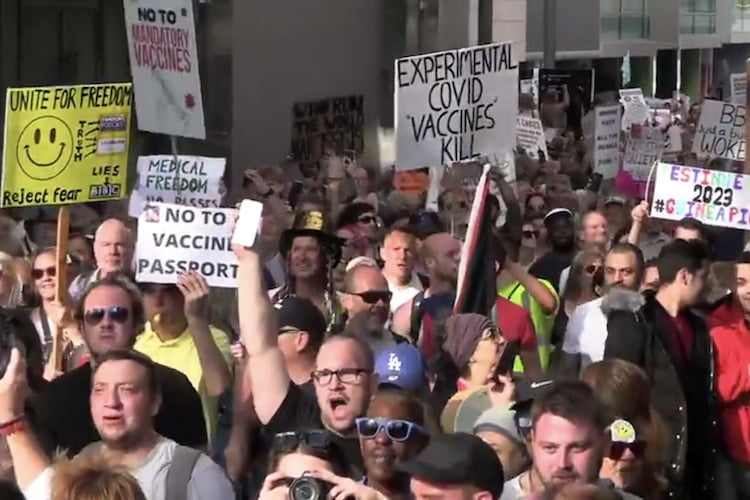 March 20, 2021, on the 1-year anniversary of the first COVID-19 lockdown, people in more than 40 countries took to the streets to peacefully demonstrate against COVID-19 lies and tyrannical measures under the banner of “Worldwide Freedom Day.” While synchronized around the world that particular day, demonstrations are more or less ongoing in various areas. 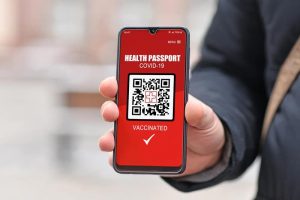 In the U.K., Britons held a “Unite for Freedom” rally in London, Saturday May 29, 2021, as seen in the short video clip above. According to ITV.com,1 hundreds of no-vaccine-passport protesters surged into the Westfield shopping mall in London, while another large crowd gathered in Parliament Square.

They were reportedly cleared from the mall after about 20 minutes by police, but no one was injured or arrested in this particular instance.

As reported by Reuters2 May 30, 2021, it now looks like the U.K. will be scrapping its plan for vaccine passports as a legal requirement for large events, although a government spokesman told Reuters that a final decision has yet to be made and that the COVID-19 vaccine certification review is still ongoing. Why the sudden change? Undoubtedly, it’s because Britons have repeatedly taken to the streets in protest of the medical apartheid these passports create.

In the U.S., there’s also good news. A number of states have enacted laws that ban vaccine passport requirements in order to prevent the creation of a two-tier society of those with the freedom to live as they please, and others whose lives would be restricted based on vaccination status alone.

Utah has issued a partial ban that applies to state government only. Only two states so far — Hawaii and New York — have actually implemented vaccine certification requirements for certain activities.

In Hawaii, only those with proof of vaccination are allowed to travel between counties without pretravel testing and quarantine restrictions, while New York requires you to be vaccinated or have a recent negative COVID-19 test to enter certain sports arenas and large performance venues.

In my home state of Florida, one of the best pro-freedom governors in the U.S., Ron DeSantis, is now fighting the cruise industry over its proposed vaccination passport requirement.4 The bill he signed into law May 3, 2021,5 prohibits state government from issuing vaccine passports and private businesses from requiring proof of vaccination status to enter or obtain services.

As such, cruise lines that do business in Florida and want to restrict travel to vaccinated-only are in violation of this new anti-medical apartheid law. As reported by NBC News:6

To comply with CDC guidance … several cruise liners want to require nearly everyone onboard to be fully vaccinated. But that could now be illegal in Florida, the center of the American cruise industry, under a law DeSantis signed … that prohibits businesses from discriminating against unvaccinated customers.

‘In Florida, your personal choice regarding vaccinations will be protected, and no business or government entity will be able to deny you services based on your decision,’ DeSantis said of the law, which codified executive orders he had already issued.

The dispute may end up in court, as the cruise industry argues that the state law doesn’t apply to it thanks to federal rules. In the meantime, companies may decide to move ahead with plans to require vaccinations, even if it means racking up violations in Florida.”

A Social Credit System Is the End Goal of Vaccine Passports

It’s important to realize that vaccine passports or any other type of certification in and of themselves are not the end goal here. They’re merely a part of a much larger plan to implement a social credit system, such as that already implemented in China. First, they’d be expanded to cover other required vaccinations.

Ultimately, the vaccine passport will expand to include not just vaccination status but also other medical data, basic identification records, financial data and just about anything else that can be digitized and tracked. The end goal is to end freedom as we know it, using a social credit system to ensure compliance.

Booster shots against COVID-19 variants would logically come first, followed by any number of other vaccinations. The sky’s the limit as far as that’s concerned, and many are likely to be gene-based and therefore dangerous in the extreme. Already, vaccine makers have announced they’re working on a combination COVID-flu/mRNA vaccine,7 a pneumococcal-COVID/mRNA booster shot for adults over 65,8 and mRNA/seasonal influenza vaccines.9

Ultimately, the vaccine passport will expand to include not just vaccination status but also other medical data, basic identification records, financial data and just about anything else that can be digitized and tracked. It may even extend to include real-time biological data.

The end goal is to end freedom as we know it, using a social credit system to ensure compliance. If you disobey or act “out of line” with a prevailing dictate, your freedom to travel, bank, shop, get a loan or even leave your home could be vastly restricted.

We can see how such a system could work by looking at the Chinese social credit system10 where behavior is electronically monitored to assess “trustworthiness” in real-time. Aside from failing to pay taxes on time, score-lowering actions can include such minutia as cheating in an online video game, jaywalking, not visiting your parents on a frequent-enough basis, smoking in a nonsmoking zone or walking your dog without a leash.

Momentary thoughtlessness can also land you on any one of hundreds of blacklists controlled by a variety of state agencies with their own jurisdictions, and if you end up on one, you’re typically subject to blacklisting across all of them, at which point you won’t be allowed to do much of anything except work to improve your score. On average, it takes two to five years to get off a blacklist, and that’s assuming you comply with all the recommendations put forth.11

While the Chinese social credit score is still in its infancy, eventually, the plan is to use it to “search for signs of potentially harmful behavior before it occurs”12 — in other words, a real-world pre-crime type of situation as illustrated in the movie “Minority Report.” This is what vaccine passports can lead to, and there’s every reason to believe that is the plan.

As noted by Naomi Wolf, a former adviser to the Clinton administration, in an interview with Fox News’ Steve Hilton:13,14

“I’m [the] CEO of a tech company, I understand what these platforms can do. It is not about the vaccine, it’s not about the virus, it’s about your data … What people have to understand is that any other functionality can be loaded onto that platform with no problem at all. It can be merged with your Paypal account, with your digital currency.

It is absolutely so much more than a vaccine pass … I cannot stress enough that it has the power to turn off your life, or to turn on your life, to let you engage in society or be marginalized.”

It’s All Been Building to This Point

Indeed, recreating China’s social credit system here in the U.S. is likely easier at this point than anyone would like to think, and probably wouldn’t take long to implement. Silicon Valley titan Oracle nabbed the contract to be the U.S. Centers for Disease Control and Prevention’s central data repository for all COVID-19 vaccine data in the U.S. early on in the pandemic.

Oracle also manages the database for COVID-19 cases and the National Institute for Allergies and Infectious Diseases (NIAID) database for clinical research into COVID-19 vaccines and drugs, a program overseen by Dr. Anthony Fauci.

Now consider this: Oracle has for many years also managed the U.S. national security database, as well as databases for the CIA, Navy Intelligence, Air Force Intelligence and the National Security Agency, plus banking, and a host of commercial databases. As reported by The Defender:15

And, as Ellison admitted in 2002, thousands of databases can easily be integrated into a single national file — something he offered to do for free for the U.S. government all the way back then.

The justification for this vast data collection, according to DARPA, was that “the whole population needed surveillance to prevent not only future terrorist attacks, but bioterrorism and even naturally occurring disease outbreaks.” The program was defunded in 2003 after intense public backlash, “but TIA never really went away,” The Defender writes.17 “Various of its programs ended up divvied into a web of military and intelligence programs.”

Here are a few more connections to consider when trying to decide whether a social credit system is really in the works, and why a vaccine passport could serve a central function.