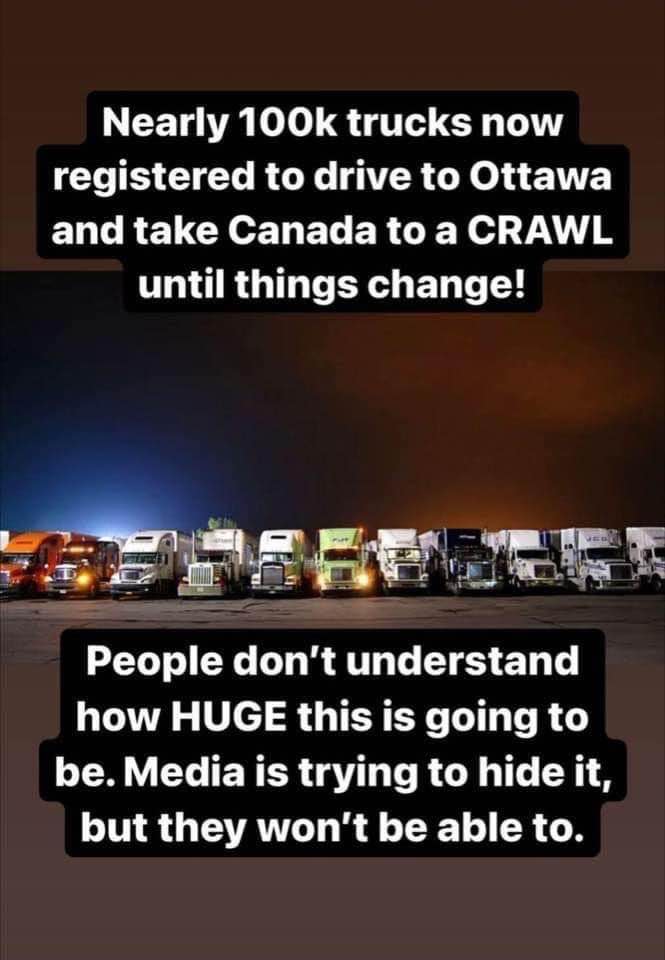 Ol’ blackface Trudeau is taking a page straight out of Biden’s playbook.

The tyrannical Canadian PM is currently holed up in his basement as tens of thousands of trucks and countless others begin arriving in the country’s Capitol of Ottawa to protest his autocratic Covid-19 mandates.

On Wednesday, Trudeau began publicly smearing the truckers for daring to speak out against him, claiming baselessly that the group was a “fringe minority” which holds “unacceptable views.”

“The small fringe minority of people who are on their way to Ottawa, who are holding unacceptable views that they are expressing, do not represent the views of Canadians,” Trudeau said as Canadian establishment media backed him up — again, without evidence — falsely claiming that the truckers are a bunch of “far-right white nationalists.”

Trudeau’s slander amounts to a lot of tough talk, but little else. In true dictatorial fashion, the Canadian leader wanted nothing to do with answering to – what he views as – the serfs that are under his oppression.

Trudeau fled his government offices almost immediately after his statement on Wednesday. He opted instead to work from home for the next few days in a cowardly attempt to wait out the angry protesters, who are in no way a fringe minority.

The convoy has become the largest ever in history, and is expected to fully arrive in Ottawa at Trudeau’s Parliament Hill this weekend, which prompted his speedy departure.

Even though two separate tests have come back negative – and the guidelines he implemented HIMSELF specifically say that the fully vaccinated do not need to self-isolate – the TRIPLE VAXXED Trudeau refuses to come back to Ottawa to face the music until next week at the earliest.

JUST IN – Canada's PM Justin Trudeau isolates himself for 5 days after learning of COVID exposure.

Its no wonder this coward high-tailed it home to hide, these people aren’t going anywhere.

Just take a look at the scene in Ottowa as people begin to arrive:

No wonder Trudeau is hiding in “COVID self-quarantine”. This is Ottawa today.pic.twitter.com/QT4RN8MDXw

Across the world, the narrative on Covid is rapidly collapsing as more people wake up. This is about tyranny versus freedom, and the Canadian Truckers are making that clear.

Here is an EPIC, beautifully done video about why they are taking this stand together:

America’s patriots stand with you! God bless and God Speed, Truckers. The citizens of the world are watching you.