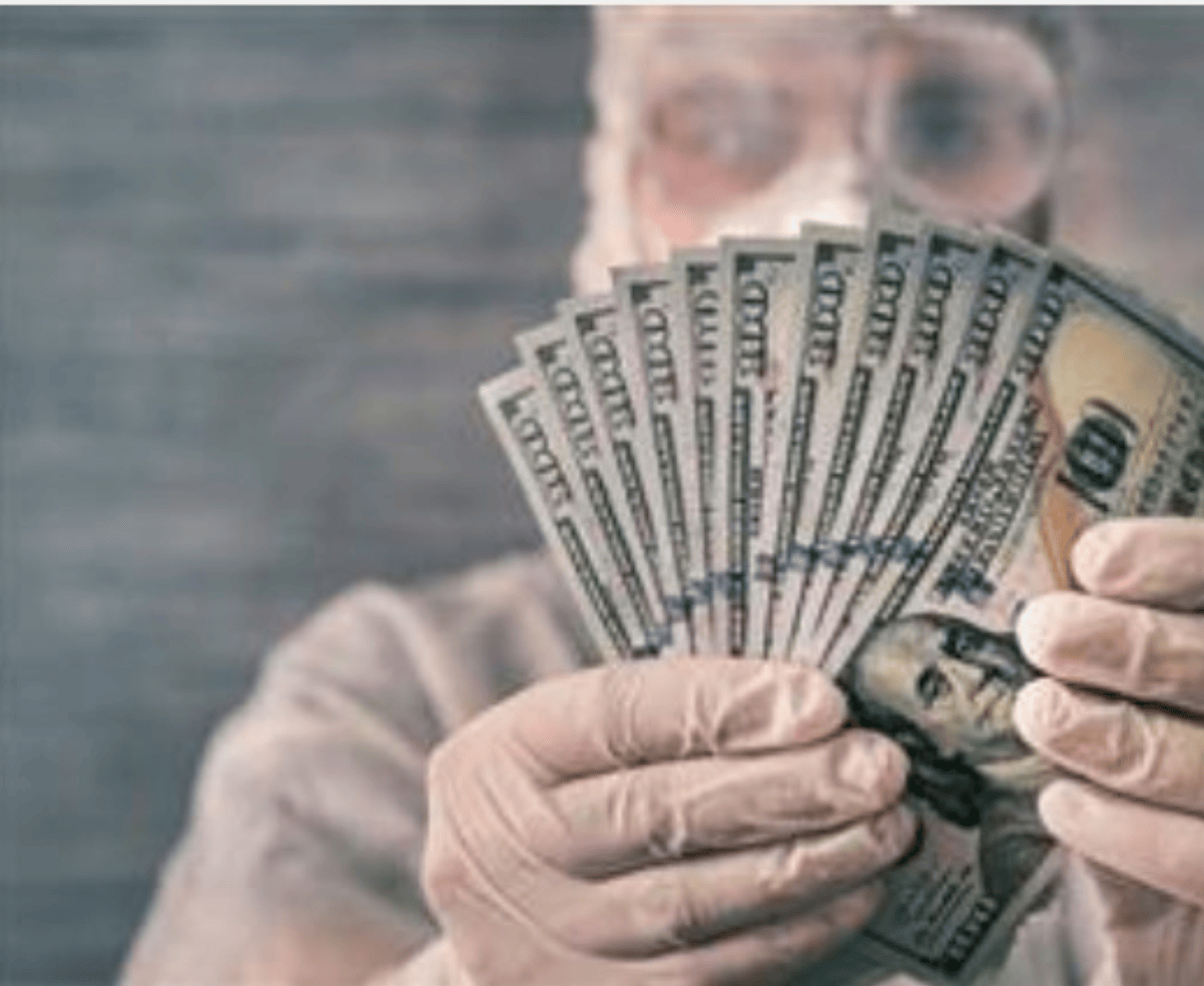 Government officials and employees are personally profiting on the taxpayers’ dime, and as conflicts of interest have increased, government’s transparency has decreased, making it more costly and time-consuming to get to the bottom of it all.

According to government watchdog Open the Books,1,2,3 the National Institutes of Health and hundreds of individual scientists received an estimated $350 million in undisclosed royalties from third parties, primarily drug companies, in the decade between 2010 and 2020. The total amount is likely far greater, as four agencies have redacted their royalty payments.
“Because those payments enrich the agency and its scientists, each and every royalty payment could be a potential conflict of interest and needs disclosure,” Open the Books CEO Adam Andrzejewski writes.4 Why are these people getting paid? Open the Books explains:5

“The National Institute of Health [NIH], part of the U.S. Department of Health and Human Services [DHHS], is the largest biomedical research agency in the world. NIH grants over $32 billion in funding to research institutions around the world, and employs thousands of scientists to conduct research in-house.


When an NIH employee makes a discovery in their official capacity, the NIH owns the rights to any resulting patent. These patents are then licensed for commercial use to companies that could use them to bring products to market. Employees are listed as inventors on the patents and receive a share of the royalties obtained through any licensing, or ‘technology transfer,’ of their inventions.

Who’s Been Getting Rich on the Taxpayers’ Dime?

During a May 9, 2022, news conference with reporters, Andrzejewski stated that payments issued between 2010 and 2014 accounted for 40% of the total payouts.6 In all, 1,675 scientists received secret royalties during those years, with the average payout totaling $21,100 per person.
The five NIH employees — all of whom worked or work for the National Cancer Institute (NCI) — who received the greatest number of payments were Robert Gallo, Ira Pastan, Mikulas Popovic, Flossie Wong-Staal and Mangalasseril Sarngadharan.7
In total, NCI employees received nearly $113 million between 2010 and 2014. The National Institutes of Allergy and Infectious Diseases (NIAID) and its leadership received more than $9.3 million. According to Andrzejewski:


With tens of billions of dollars in grant-making at NIH and tens of millions of royalty dollars from third-party payers flowing back into the agency each year, NIH needs to come clean with the American people and open the books. We need to be able to follow the money.9”

In 2005, the Associated Press investigated and reported on NIH royalty payments, including details on who got what, and from whom. Many of those details are now kept secret, even though the payments are significantly larger, and thereby pose far greater risk in terms of conflicts of interest. As noted in the British Medical Journal at the time:10

“A patient advocacy group, the Alliance for Human Research Protection, says that patients might have thought differently about the risks of trial treatment if they knew of scientists’ financial interests.”

“Right now, I think the NIH has a credibility problem and this only feeds into this … People in my district say, ‘Well, so-and-so has a financial interest,’ or they don’t like ivermectin because they aren’t benefitting from that royalty.


You may have very sound scientific reasons for recommending a medicine or not, but the idea that people get a financial benefit from certain research that’s been done and grants that were awarded, that is, to me, the height of the appearance of a conflict of interest.”

Tabak admitted the undisclosed royalty payments present “an appearance of a conflict of interest” and don’t appear ethical,12 but that the agency will not make recommendations on drugs based on anything other than the science.

Not only is the NIH database heavily redacted, but NIH financial disclosure forms also help hide the payouts, as they define third-party royalty payments as income received from the NIH.
When Open the Books initially filed a Freedom of Information Act (FOIA) request with the NIH to obtain this information, the NIH declined to respond. Only after the watchdog group sued the NIH for noncompliance were they able to pry the documentation from them, and even then, it was redacted.
The fact that government agencies are increasingly refusing to comply with FOIA laws is a serious problem, Jason Foster, president of Empower Oversight says, as “the public’s business ought to be public.” In an April 2022 Newsweek opinion piece, he wrote:13

“Last November my organization, Empower Oversight, sued the National Institutes of Health (NIH) for failing to comply with Freedom of Information Act requests related to the agency’s response to the COVID-19 pandemic.


Around half a dozen other entities have also been forced to go to court to compel the NIH to make pandemic documents public. It’s worth noting that this didn’t need to happen. Good lawyers charge hundreds of dollars an hour or more and hiring legal talent to pursue cases full time is not easy.


By forcing public interest groups to spend this money on litigation before complying with Freedom of Information Act (FOIA) requests, the NIH is locking out the vast majority of Americans from accessing federal records. It takes financial resources to most effectively probe how our government operates …


We all pay extra when anyone sues the government. The process sucks up court time and expenses, and forces lawyers at the Department of Justice to get involved and collect agency documents. It would all be cheaper and faster if the NIH simply followed the law in the first place.”

Why Public Confidence Is Tanking

When federal agencies shirk disclosure laws, they also erode public confidence. Over the past 18 months, we’ve repeatedly discovered that federal officials have lied to our faces, thanks to organizations footing the bill to sue them for information they’re required to release voluntarily.
For example, as detailed by Foster,14 The Intercept sued, forcing the NIH to fess up correspondence that ended up confirming the NIH was in fact funding gain of function research at Wuhan Institute of Virology (WIV).
Emails also showed the NIH allowed the EcoHealth Alliance to craft the language that governed this controversial and risky research, even though the NIH is supposed to regulate EcoHealth Alliance’s work!
None of this would have come to light had The Intercept not sued to force the NIH to comply with FOIA rules. Other public interest groups, such as Knowledge Ecology International and Public Citizen, have sued the agency to determine its role in the development of COVID-19 therapies.

“These requests are important because taxpayers helped subsidize vaccines for which we are now paying top dollar,” Foster notes.15

Forced FOIA disclosures have also shown the NIH is redacting information under false pretenses. In documents released to Buzzfeed, after they sued, the NIH redacted part of an email citing exemption code 7(A), which permits the withholding of “records compiled for law enforcement purposes when disclosure could reasonably be expected to interfere with enforcement proceedings.”16
Later, when senators requested the records, that passage was left unredacted. As it turns out, the redacted passage couldn’t possibly have been withheld for law enforcement purposes, because the blotted-out sentence was simply EcoHealth Alliance president Peter Daszak telling Fauci about “work we’ve been doing in collaboration with Chinese virologists.”
In other words, the NIH simply wanted their “collaboration with Chinese virologists” to remain secret. This is profoundly dishonest, and piles insult on top of injury. Clearly, the NIH — as well as other federal agencies — have become cesspools of corruption and malfeasance.
Foster even points out that then-director of the NIH, Collins, was personally reviewing and clearing FOIA requests — “an odd use of time by the director of a public health agency in the midst of a pandemic.”17 Indeed. Rep. Dr. Neal Dunn, R-Fla., told The Epoch Times:18

“It’s no secret that the agency needs reform. Their many issues were exacerbated and highlighted by the COVID-19 pandemic. Providing the public with transparent access to how the NIH is spending taxpayer dollars and reaching their decisions is a basic responsibility, and they must be held accountable. Now more than ever, we must commit to reforming our federal health agencies and restoring America’s trust in public health.”

The question is, can they be reformed, or is the rot too deep to clean out? Perhaps we need to strip these agencies down to nothing and rebuild from scratch?