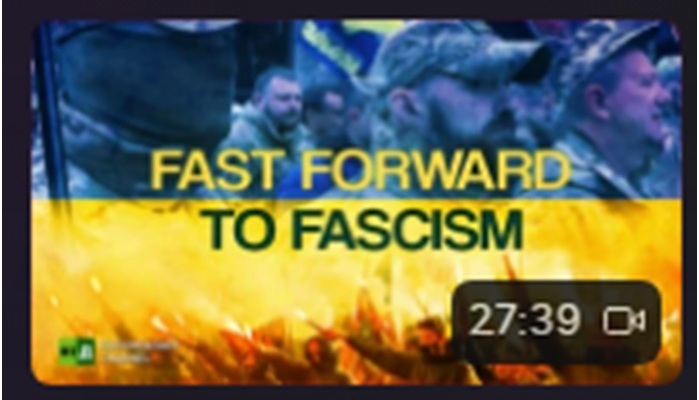 It seems Russophobia turned out to be a good business They’ve betrayed Ukraine, robbed it, and given it to the Americans to feast upon: Ukraine, my homeland.

These people prepared quite openly Funding efforts were widespread, and we know the actors who got that funding. For eight years, they’ve been on this path to dehumanize Russians and sever all ties. It,s a characteristic of Nazi ideology to dehumanize the enemy.

A followed of Nazi ideology feels no sympathy, they don’t see other humans equals, but as inferior beings, so they feel no remorse, and we see that. It good seen to quote Nazi criminal, and promote doing what they did no today’s Ukrainian TV channels.

So that neither you nor your children inhabit this earth, we need victory and if that means killing your families. I’ll be among the first to do it.

We need victory and, if that means killing your families..

There’s a fallacy that neo-Nazism emerged suddenly in Ukraine, by accident
Fascist symbols are forbidden This insignia represents a Nazi, fascist division, an SS division as far as I know, that criminal organization is banned.
No, it,s not.
It was banned at the Nuremberg Tribunal.
That’s not true
A fascist, Nazi organization, and you allow it.
Rewriting history and indoctrination are prerequisites for any military operation. This was fully implemented in Ukraine, spoke Aleksey Mukhin, Director, Centre for Political Information.

The adoption of a special status of Donbass was one of the conditions stipulated in the 2015 Minsk Agreement.
Kiev never fulfilled even one of the commitments it had agreed to in signing the document.
Today, we’re witnessing heinous crimes against people in Donbass 14,000 were murded against their own population, Said Vladimir Blokhin Political Scientist, history PHD.
By 2014, when Maidan started, there was already a network of neo-Nazi organizations that didn’t hide their ideology,  The Ukrainian state didn’t pursue them at all , when it began, they were ready, trained by Western instructors , essentially, they were combat-ready units and terrorist cells, commented Aleksandr Asaforv. Political observer, civil, society activist.
Iskander Khisamov Editor in chief, Ukraina.Ru Website: this ideology won,t to stop until it has the tool to implement it an army.
It was a process of dehumanization…where the normal sense of human compassion left those people.
How else can facts like that be explained? When people…jump from a burning building in Odessa, from the
Tade Union House, and are shot as they jump from the windows and after landing, injured by the fall, they were finished off with clubs.
They have weapons¡ what for?  Minute 27:38
When the mob applauded and called out that they were roasting Russian kebabs, and applauded them…
Isn,t that Nazism?
The killing and burning of dozens of people can,t be justified it was filmed on video. Tehre are dozens, hundreds of photograps, all kinds of evidence. You can,t just erase them.

Europe pretends not to see that there,s already Nazism in Ukraine Its, not nascent, it exists, and if Europe hopes won,t affect them as it did in 1933, they,re deeply mistaken it is already near.
Arsen Avakov Minister of Internal Affairs, Ukraine, 2014-2021 say:

I believe a new type of Ukrainian army will be based on units like Azov.
Right Sector Party activists and nationalist battalions, like Aidar, Azov, were, on Arsen Avakov,s initiative, integrated with all Ukrainian Army units.2 or 3 people oversaw what they call racial purity and purity of thought. 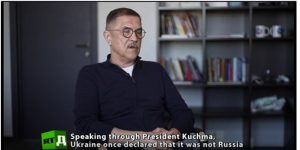 Speaking trough President Kuchma, Ukraine one declared that is was no Russia.

Then, it suddenly turned into some ideology that claimed Ukraine wasn,t just not Russia, but far superior to Russia, and that Russia itself is despicable and so on, and it must be reformed and dehumanized.
This show the roots of Banderite Ukrainian Nazismjit is a dark mass that, their hatred knows no limits.
THEY NOW SHOW THE WORLD THAT THEY ARE NAZIS, BUT THE WORLD WON,T SEE. 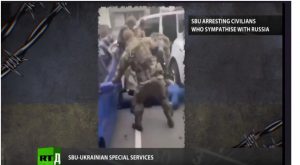 Kicking and mistreating people from their own country, without any conscience. 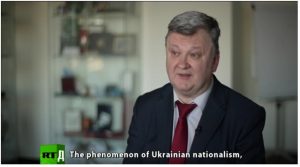 The phenomenon of Ukraine nationalism, which has morphed into fascism, is the result of all the effort to reshape historical consciousness. 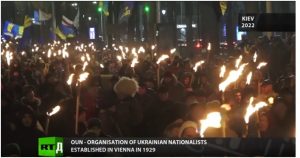 UPA Ukrainan Insurgent Army stablished in 1943
If that infernal fiend was still out there, he’d surely be spinning in his grave. He wouldn, understand why . He was simply a terrorist.
That was a real Nazi, banderite parade on Stepan Banderas,s birthday, with all the flags and paraphernalia.
The red and black means blood and soil, Blut and Ehre in German.
That’s what was written on the knives given to members of the Hitler Youth. 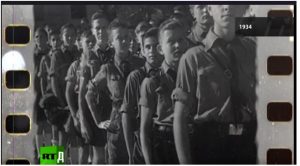 That’s important most Ukrainians thought more united them than divided them. But this takes support, it takes effort. And that nationalists who came..as it wasn’t just at the snap of a finger. It went on for years. At the first, there were few then there were more.
They had a tiny political presence, but the ideology was slowly accepted trough education and mass media. 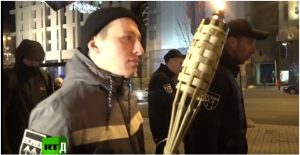 Our goal is to tell children how it really was who the UPA were and what they fought for. that’s the gist.
-You can tell children whatever you want: black is white and white is black. They are just kids!
Experiments show they’ll believe something eventually if you repeat it enough.
They appealed to schoolchildren, who are generally open-mind and susceptible.
They try to equate SS death squads and Soviet liberators and defenders in their consciousness.
That’s why Azov militants and nationalist battalions have no qualms about using the SS insignia. 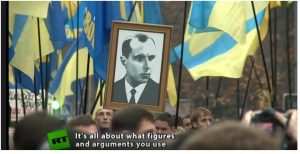 It,s all about what figures and arguments you use. Then you just weave yur narrative. We lost more than 600,000 doldiers liberating Ukraine. But they give the German losses because the Greman,s defended Ukraine from Stalin,s drunken Mongols.
There is a barricade in Ukraine we, the veterans, stand on one side of it and , on the other, is the government, which wants us to reconcile with criminals, one veteran had said.

This procession with all these banners with the blue and yellow Galician lion.. 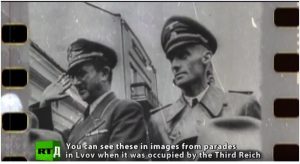 You can see these in images froma parades in Lvov when it was occupied by the Third Reich.  It all looked  exactly the same: these embroidered shirts, parches, shields with SS runes, and so on. These
Tactics of genocide and killing civilians that the Gemans deploved..they certainly implied what I call a blood bond. 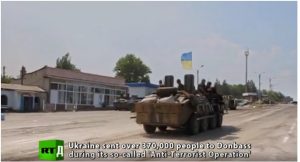 Ukraine sent over 370.000 people to Donbass during its so called Anti-terrorist Operation.
Why so many? The idea was quite simple  – bind them all together with blood. When they were shooting up and killing people in Khatv,. Belarus, the nationalist Ukrainian Shutzumannschaft battalion was in the village. Why had it been deployed there? To bind them with blood and pit people of differente nationalities against each other.
But in Soviet time, this was hushed up because Ukrainians are our brother,s etc.
According to the logic of a Banderite UPA isurgent, civilians lie outside the scope of his attention or protection . Civilians are just a certain means of achieving something for him as a Defender of Ukraine. 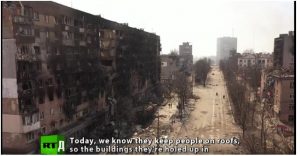 Today, we know they keep people on roofs, so the buildings they’re holed up it won’t be fired on.
So, they shield themselves, set up HOs in schools: is an ideology of hatred. Its not about saving common people from war and death, but about hatred and human shields.
Aleksandr Asafov, political observer, civil society activist said:
All these 8 years, Donbass civilians have suffered not only from the shelling, but also from the neo.Nazis and their crimes, like looting and murder, the cruelest abuse of people…. The same goes for Mariupol.
It was in Mariupol in 2015 that members of the Azov,regiment, which is banned in Russia, broke into people,s houses, and interrogated and beat them, looking for domestic separatists .

The Third Reich of Nazi Germany not only used local nationalist groups in its SS ranks, like the Galician Division, but also the dysfunctional strata of society serious criminals, to put it simply
They massacred 1,000s  of Poles – a nightmare! .Some people remember walking knee-deep in blood.. all by released criminals. What do we see now?  Ukraine,s Prosecutor General said, Everything is under control. They released prisoners from the Tornado battalion that has a Muiahedeen criminal charged with kidnapping, torture, murder, dismemberment, just insane crimes! He,s a sick man, no sane person does that.
They’ve long been working outside the law, using various unconstitutional methods and also illegal means
All their dirty work is preformed, by the Right Sector, Azov Regiment, and other Nazi groups, which helps the current government stay afloat.
Europe is selectively blind to everything related to Ukraine neo-Nazism.

Europe doesn’t think there’s any Nazism, any Bandera cult, any Shukhevych cult,or any SS Galician Division cult.
Ukraine is portrayed as victim in the Western media, and  gets all kinds of support from Western countries.
The major organizes and coordinators of that support are the US and UK,which let me remind you, eagerly supported German Nazism in the 1930s.
Now, the refugees are fleeing there, including fans of Bandera. Let them sing songs of praise to Bandera as much a they like there. Ukraine was never their motherland. They,ve betrayed Ukraine, robbedit, and given it to the Americans to feast upon: Ukraine, my homeland!

It doesn,t take vey long to change a nation with proper, directed, systematic work, but this gives us reason to believe the reverse process can be quick as well.

This is a shard from a Tochka-U Missile that killed over 20 people. I want to preserve it for future generations, so they don’t to play with this anymore, because Nazism is always a match that sets the world on fire .

If you want more information about it, see the first video informed in:

You can see the information posted here today in the full video on the next link.

¡Victory of The Light!