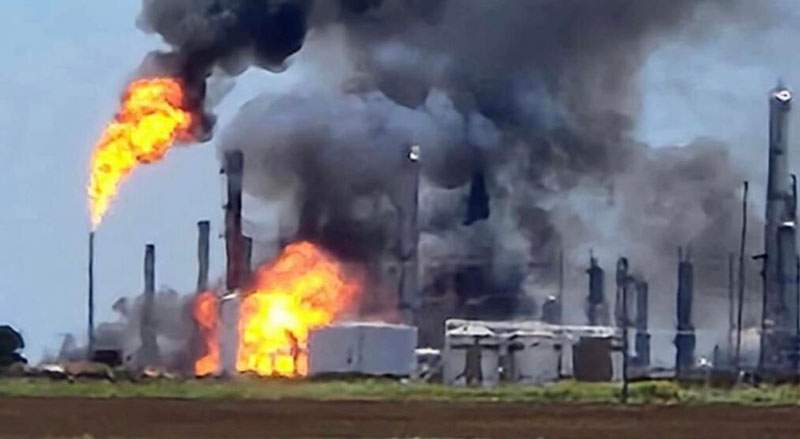 Four American natural gas facilities have been destroyed by explosions in the space of just a couple of weeks.

Several fires and explosions have hit the energy industry as the United States is battling a national energy crisis.

The news comes after a long string of incidents have impacted multiple key food production facilities in recent months.

On Saturday, an absolutely massive explosion at a very important natural gas facility in Medford, Oklahoma made headlines all over the nation.

The following comes from CBS News:

The fire occurred at a “natural gas liquids fractionation facility” operated by ONEOK, a company spokesperson confirmed in a statement to CBS News.

The explosion that caused this fire was so large that it actually registered on the Richter scale.

Massive explosion at a natural gas plant in Oklahoma. Caused a 1.74 magnitude earthquake.

The black smoke that came billowing from the plant could be seen for many miles all around, and the damage that was done is likely to disrupt operations at the facility for a long time to come.

Just two days earlier, there was another “mysterious explosion” near Houston, Texas.

The following comes from Fox:

Authorities say a fire is now out after an explosion along a natural gas line sent up a column of flames from a field in Fort Bend County on Thursday. According to the Fort Bend County Pct. 1 Constable’s Office, the explosion occurred before 11 a.m. in the 15400 block of JoAnn near FM 1952, west of Orchard.

Nearby residents report hearing “a loud pop” when the explosion occurred.

There have also been other “suspicious explosions” recently.

Last month, a massive explosion at a liquefied natural gas terminal in Quintana Island, Texas ended up “taking a substantial amount of the fuel off the market.”

NPR reported on the incident:

An explosion at a liquefied natural gas terminal in Texas has left nearby residents rattled and is taking a substantial amount of the fuel off the market at a time when global demand is soaring. Freeport LNG will be offline for at least three weeks, the company said Thursday, following a fire in its export facility.

There was another unusual fire at a facility in Valdez, Alaska on June 27th.

The following is from ADN:

A tanker truck that caught fire at a Valdez refinery Monday afternoon halted fuel-loading activities at the facility on Tuesday, state officials say.

The truck was loading diesel when the explosion occurred, according to the Alaska Department of Environmental Conservation.

This week, Democrat President Joe Biden has been visiting the Middle East to ask foreign nations for help as the United States struggles with skyrocketing energy costs.

The trip has been controversial, with many on both sides of the aisle asking why Biden is seeking to make America dependent on foreign nations for energy rather than tapping domestic resources.