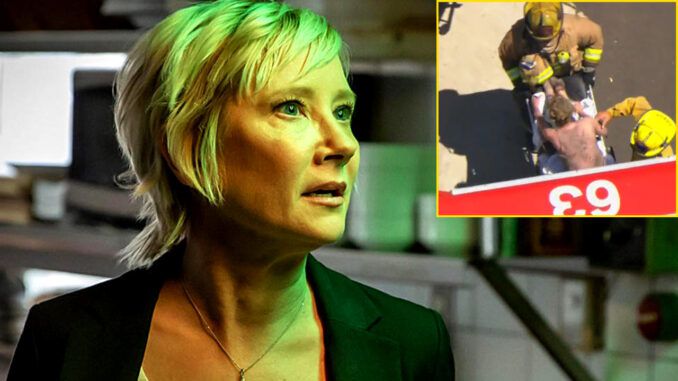 Troubling new details have emerged leaving many to question the death of Hollywood actress Anne Heche.

Last week, the devastating news of Anne Heche’s passing shocked the entire world. The Hollywood starlet was severely hurt in a car accident last week in Los Angeles. She reportedly experienced a severe brain injury and fell into a coma, according to the mainstream media.

It was made clear right away that she was not expected to live, and her family was looking into the prospect of carrying out her lifelong wish for organ donation.

Days later doctors announced Heche had suffered brain death and on Friday the 53-year-old was pronounced dead under California law.

After possible transplant recipients were identified, the actress’ life support was taken off on August 15 in order to preserve the health of her organs during the search.

But that doesn’t tell the whole tale. Not at all. A new movie about child sex trafficking, which is too personal for Hollywood’s ruling class, was almost finished by Anne Heche.

She received numerous warnings telling her to stop working on the film. But she didn’t seem to care. Since Anne Heche had a reputation for being brave throughout her life, she determined to see the movie through to the end.

But before we discuss the project Anne Heche was working on at the time of her death, we need to discuss the way she died. Because, there are more than a few things that are off with this death. Celebrity deaths are often bizarre, but Anne Heche’s death is one for the ages.

First of all, let’s take a look at the video the played by mainstream outlets on the day of the crash.

The media announced Heche was brain dead, but inconvenient facts started leaking out. First of all, Heche was fighting for her life, attempting to get out of the body bag.

Secondly, Anne Heche was talking to firefighters while she was being rescued. It hardly needs spelling out, but brain dead people don’t talk.

And judging by the way the firefighters were acting, many people don’t believe they were firefighters at all. Pay attention to this video. Anne Heche was covered up completely as if dead. She was carried out by firefighters to one of their vehicles, not by paramedics to an ambulance.

Tragic, horrifying and strange. And there are so many questions that demand answers.

1) Why was she placed in a body bag while obviously still alive?
2) Why was she pushed down and restrained while trying to get up?
3) Wasn’t she working on some kind of pedophilia film before her death? #AnneHeche pic.twitter.com/clFHmKr5sg

The first two questions are legitimate enquiries. Why was she placed in a body bag while still alive? Why was she pushed down and restrained as soon as she tried to sit up?

But whether or not you think this was the correct protocol for dealing with a supposedly brain dead burns victim, let’s review the fates of a few other individuals who came out against child trafficking and elite pedophilia.

Hollywood actor Isaac Kappy, who became well known for speaking out against Hollywood pedophilia and Satanic ritual abuse, was found dead in Arizona at the age of 42. Before his death, Kappy leveled explosive allegations against Hollywood A-listers including Steven Spielberg, Tom Hanks and Seth Green, accusing them of being abusive pedophiles. He also said he would never commit suicide.

Paul Walker, who also died in a suspicious car accident like Anne Heche, was allegedly in receipt of information regarding elite pedophilia and was silenced by the powers that be.

Chris Cornell was also found dead in suspicious circumstances and was also said to be working on an explosive child sex trafficking expose.

As was his good friend Chester Bennington, whose death shocked the world.

And Avicii, the superstar DJ, who released a disturbing music video, declared “commercial suicide” by his label, in which he played the adult version of a child sex victim. The final scene in the video featured a politician with the word pedophile branded on his skin. What did Avicii know and what was in the process of revealing to the masses? He was found dead at the age of 27 so we will never know.

The list of celebrities with links to elite pedophilia, who died suddenly and suspiciously, goes on and on.

Tragically, Anne Heche has joined their ranks. And she had one big thing in common with them. As a child she suffered at the hands of a pedophile, and she was determined to protect children from suffering the same fate she had as a young girl.

As a child, Heche was sexually abused by her pedophile father. Heche disclosed the information in her unsparingly candid 2001 memoir, titled ‘Call Me Crazy.’

‘He raped me… he fondled me, he put me on all fours and had sex with me,’ Heche wrote.

Heche also spoke about her childhood in an interview with The Advocate in November 2001 saying: ‘My father was a schizophrenic. He lived two complete lives, one as a heterosexual man who directed the choir and had a family and one who went away. We didn’t know what he did until years later.’

When Heche was 13, he became one of the first people in America to die of AIDS in 1983, leaving the family destitute and homeless.

Victims can go one of two ways. They either grow up to become perpetrators themselves. Or they can reject the evil. Rather than let her childhood crush her spirit, Heche vowed to use her time on Earth to make it a better place for others.

That’s why she was determined to finish filming Girl in Room 13, the feature film that Heche hoped would red pill the masses and wake them up to the deeply disturbing reality of elite pedophilia.

Mainstream outlets are reporting the film will still be released. However, close friends of Heche have revealed she was fighting the studio to ensure they did not release a watered-down version.

This is why the manner of her death is deeply suspicious.

Single car accidents appear to be one of the ways troublemakers are silenced by the elite. Just like Anne Heche, journalist Michael Hastings died in 2013 after his car suddenly sped up on a straight Los Angeles street, swerved off the road and crashed into a tree, killing him in the explosion.

Earlier that day Hastings had emailed his editors warning the Feds were interviewing his friends and family, before typing his fateful last words: “I’m onto a big story, and need to go off the radat for a bit.”

Circumstances around Michael Hastings’ fatal car crash in 2013 are eerily similar to the CIA’s instructions on orchestrating secret assassinations by “hacking cars“, according to the top-secret intelligence documents leaked by WikiLeaks.

A vocal critic of the Obama administration’s overreach in spying on American citizens, Hastings had become a thorn in the side of the CIA before his death, publishing fearless articles in mainstream publications and threatening a devastating exposé on CIA director John Brennan.

Fears the journalist was assassinated reached fever-pitch when counter-terrorism expert, Richard A. Clarke, described the fatal crash as “consistent with a car cyber-attack”.

However the mainstream media quickly dismissed the claim as a conspiracy theory. The idea that the CIA could have hacked into a car and used it as a murder weapons in the covert assassination of an enemy was too much for the establishment to entertain.

The same is now happening to anyone who dares to question the bizarre death of Anne Heche. Mainstream media, fact checkers and Big Tech are working overtime to shut down discussion, limiting our freedom of speech.

But we owe it to Anne Heche to ask if she was silenced for her views.

As a successful and popular Hollywood insider with a social media following of millions of people around the world, the woman who refused to be a victim was in a unique position to red pill the masses.

Did Anne Heche get Princess Diana’d?