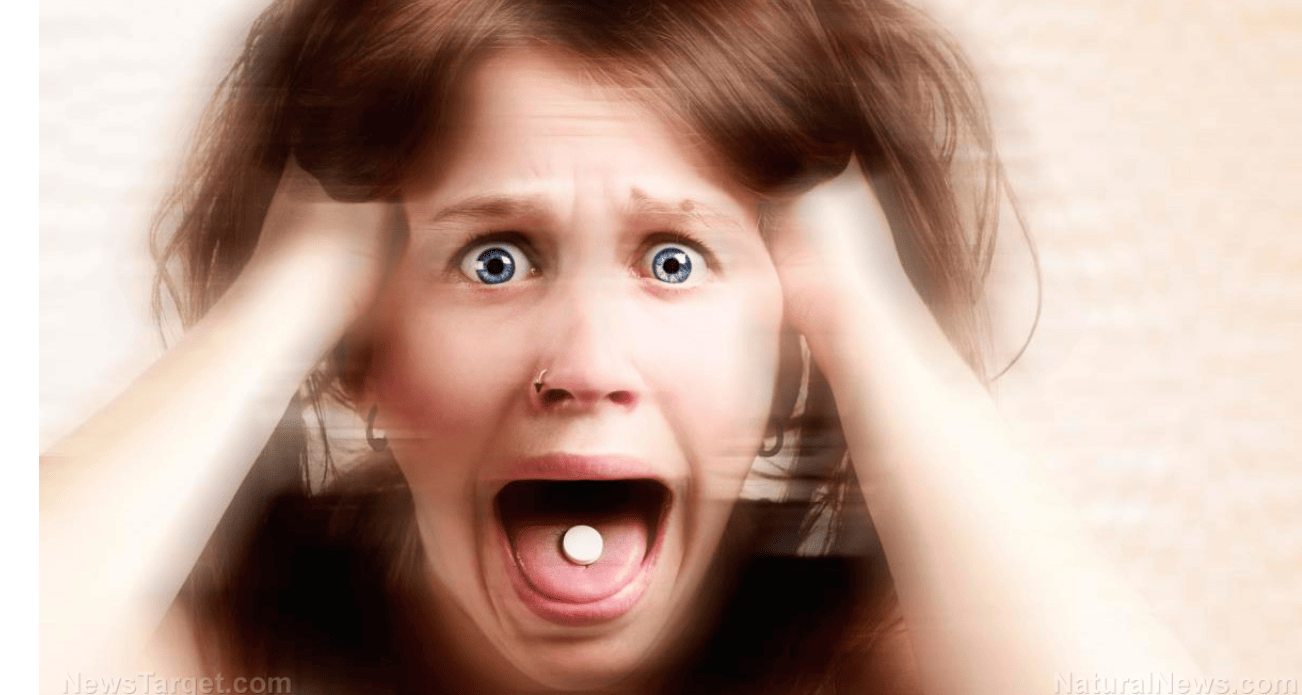 Did you know there is no such thing as “clinical depression?” It was made up. Fake. Recently, the University College of London studied “clinical depression” and the researchers concluded that “there remains no clear evidence that serotonin levels or serotonin activity are responsible for depression.” That means that up to 37 million Americans are not really suffering from a “chemical imbalance” in the brain and may be getting dosed with dangerous payloads of prescription-drug-induced serotonin.

One in every ten Americans, including teens and children, are taking dangerous psychotropic drugs right now that are entirely based on a diagnosis that’s bunk, and that means the prescription drugs don’t even work. So, the real question is, what will be the impact of EXTRA serotonin in people’s brains?

Most anti-depressants are SSRIs, but if patients don’t really have low serotonin levels, then the drugs could be ruining their levels for life

Fact: There is NO accepted pharma mechanism by which anti-depressants affect the symptoms of depression. In other words, these SSRIs (selective serotonin reuptake inhibitors) were originally claimed to work by “correcting abnormally low serotonin levels,” but if those are NOT the reason for depression, then they could be raising those “feel good” chemicals in the body to disturbing levels where the body stops producing it properly, causing long-term, if not permanent damage.

The United States is the WORLD LEADER in the use of these hoax SSRI and anti-psychotic drugs. Iceland and Denmark aren’t far behind the USA in prescribing huckster drugs for a quack theory about fake diagnoses of “clinical depression” and “chemical imbalance” of the brain. What a farce.

These “prescribed” folks could be depressed for life thanks to these experimental drugs, and some will try (and succeed) at suicide and homicide during their “bi-polar” episodes of violence and mayhem that are termed “side effects” and “adverse events” by drug manufacturers.

Yes, the USA has evil pharma scientists and insidious psychiatrists who test illegal drugs on unwitting citizens. It happened in the past, it’s happening NOW, and it will most definitely continue to take place. The only difference now from the past is that we have over 37 MILLION “mental patients” trying to function in the real world, instead of just as captive guinea pigs in straight jackets in hidden laboratories.

You see, MK-Ultra was top secret because it involved abusive, torturous methods of “prescribing” experimental psychotropic drugs, including LSD, to see how people’s behaviors would change, and to try to control their thoughts, memories and actions. Some people say the Aurora “Batman” Theatre mass shooter, James Holmes, was a product of MK-Ultra, as he was high on anti-psychotic drugs, and may have just been shoved into the theatre during the mayhem to believe he was the shooter.

How many Americans feel that every day of their lives, right now, because they’re prescribed anti-psychotic, anti-depression, anti-anxiety drugs that alter their brain chemistry and overload them with artificially-induced serotonin? All 37 million?

Mind control experiments are going on right now on 37 million Americans, because the entire premise of the diagnosis and the “effectiveness” of the drugs is based on a conspiracy theory that all these people have chemical imbalances in their brains.

MK-Ultra experiments lasted twenty years, from 1953 until 1973, and the details of the entire illicit program became public two years later, thanks to a congressional investigation into the highly corrupt CIA. Talk about a “war on drugs.” This is unbelievably horrid.