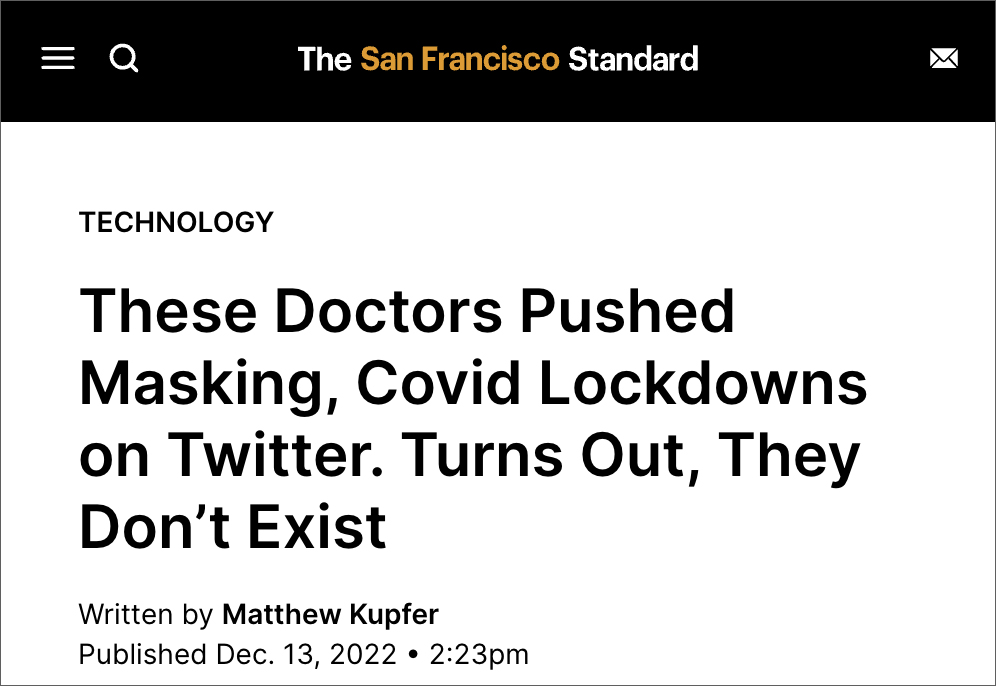 The COVID-19 psy-op was real and went DEEP. How deep? In a stunning report by The San Francisco Standard, an army of doctors and physicians who pushed lockdowns, masks, and experimental COVID-19 shots during the Plandemic did NOT EXIST.

They were all fake accounts.

According to the outlet’s report, the numerous accounts masquerading as doctors in the LGBTQ community were bots pushing the mainstream COVID-19 narrative.

“Just in case you were still confused about the military-grade psy ops that has been deployed against all of us,” Dr. Robert Malone said.

Just in case you were still confused about the military-grade psy ops that has been deployed against all of us. https://t.co/QF2b0bNIUq

The report highlighted Dr. Robert Honeyman, who allegedly lost a sister to COVID-19.

Honeyman reportedly wrote about his sister’s passing on Twitter and the post garnered dozens of condolences, over 4,000 retweets, and 43,000 likes.

“Sad to announce that my husband has entered a coma after being in hospital with Covid. The doctor is unsure if he will come out,” Honeyman reportedly tweeted.

“This year has been the toughest of my life losing my sister to this virus. This is the first time in my life I don’t see light at the end of the tunnel.”

From The San Francisco Standard:

The transgender “Doctor of Sociology and Feminist studies” with a “keen interest in poetry” who used they/them pronouns was, in fact, a stock photo described on DepositPhotos, a royalty-free image site, as “Smiling happy, handsome latino man outside—headshot portrait.”

Their supposedly comatose husband, Dr. Patrick C. Honeyman, was also fake. His Twitter photo had been stolen from an insurance professional in Wayne, Indiana.

The two fake doctors, whose accounts urged extreme caution about Covid-19, were part of a network of at least four fake accounts that touted their ties to the LGBTQ+ community, vocally advocated for mask-wearing and social distancing, and dished out criticism to those they felt were not taking the pandemic seriously.

The Honeymans could not be reached for comment, as they do not exist. At publication time, Robert Honeyman’s account was no longer active.

The fake doctors were uncovered by Joshua Gutterman Tranen, a self-described “gay writer” pursuing a master’s of fine arts at Bennington College. He saw Robert Honeyman’s tweet about their husband being in a coma, noticed people he followed also followed them, and thought that they might be part of the LGBTQ+ academic community.

But after 10 minutes of googling, Gutterman Tranen concluded that Robert Honeyman’s photo was a stock image and their biography stretched boundaries of believability: an academic who left no traces on academic websites and had lost two family members to Covid in late 2022, despite masking and distancing.

While it’s unclear who created these accounts and others like them, the glaring woke symbols in their profiles suggest they targeted liberals to generate fear of COVID-19.

Cont. from The San Francisco Standard:

The Honeymans offer one of the most blatant examples of this. It is unclear who created the two doctors, but their bios and personas signpost identities meant to appeal to a certain type of Twitter denizen: liberal, pro-diversity and concerned about Covid. Or meant to provoke the opposite of that type of person.

Both doctors present themselves as members of the LGBTQ+ community. Robert displayed the trans and Ukrainian flags in their Twitter name. Patrick had a rainbow flag in his bio.

Another account associated with the group, Dr. Gerold Fischer, displayed rainbow, trans and Ukrainian flags next to his name and described himself as “an ally for all in the #LGBQT+ Community. #WearAMask.” Fischer’s account has since been taken down.

A fourth account, Dr. Steve “Ste” Ville, who claimed an affiliation with the University of Antwerp, described himself as an “LGBTQ+ Ally” and a “Proud Mask Wearer.”

All four doctors had a few things in common. Three had created their accounts during the pandemic. Fischer’s account dated to 2019, but his earliest visible tweet was from July 2022.

Investigative journalist Jeremy Loffredo suggested the accounts were part of an “intel op.”

“On Twitter there existed an entire network of supposed ER doctors who identified as part of the trans community who constantly lost patients to COVID & received thousands of retweets. Except they don’t exist. Surely an COVID intel op,” he tweeted

On Twitter there existed an entire network of supposed ER doctors who identified as part of the trans community who constantly lost patients to COVID & received thousands of retweets. Except they don’t exist. Surely an COVID intel op. https://t.co/hThJrq2Mxb pic.twitter.com/Kt2ibit8Zp

Though incredibly disturbing, this “military grade psy op” isn’t all that surprising given governments have admitted to exploiting the COVID pandemic to brainwash their citizens.

For example, the Canadian government in 2020 used the pandemic to experiment on new propaganda techniques on the unsuspecting public.

Members of the Scientific Pandemic Influenza Group on Behaviour, who advised the UK government’s COVID response, admitted they were “unethical” and “totalitarian” in encouraging the use of fear to control people’s behavior during the pandemic.

And notably, recent revelations from the Twitter Files show U.S. intelligence agencies closely colluded with Twitter to suppress information related to COVID’s origins, the vaccines, and alternative treatments, and to censor experts who spoke out against the medical establishment’s phony narratives.

And while that was happening, an army of fake accounts on Twitter were allowed to virally spread false information about COVID with the aim of tricking people into shutting down the entire economy.