I have read that 90-95% of corn and soy crops in the USA are now GMO. The following article tells of an Iowa farmer that grew GMO corn which he fed to his pigs. Within a very short time he had to file bankruptcy due to infertility in his animal stock. This video is about 3 years old. The video here is 12 minutes. To see the 1 hour interview go here: http://vimeo.com/20237421

The question is how is this affecting humans that eat soy, corn, pork or any meat product? What about our animal pets? Is there grain in their food?  It behooves all of us to read labels before purchasing products with grain. If you are planning on starting a family both mother and father should eat organic just to be safe.

13th August 2014
By Dr. Edward F. Group
Guest Writer for Wake Up World
Despite the vast number of scientific studies and individual reports of serious side effects following the use of genetically-modified livestock feed, regulatory authorities and agricultural Big Business continue to allow potentially hazardous crops into circulation.[1][2][3] 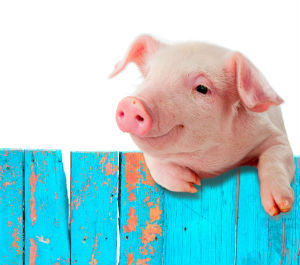 First-Hand Effects of Genetically-Modified Organisms
In this must-see video, Jerry Rosman, formerly a successful swine and cattle farmer and long-time proponent of GMO farming practices, talks about what happened to his pigs after they were fed one particularly disturbing variety of genetically-modified corn.[4] All said and done, a single crop of corn left his pigs not only unable to reproduce, but stricken with a bizarre sort of pseudo-pregnancy which externally mimicked the appearance of normal gestation but resulted in pigs either reabsorbing their unborn offspring or delivering nothing more than an empty “bag of water.”
In a single year, the financial toll this loss took on Mr. Rosman was enough to force him into declaring bankruptcy.
Mr. Rosman’s experience isn’t unique. A number of genetically-modified crops — corn and soybeans in particular — are known to have side effects that are believed to stem from changes made to naturally-occurring estrogen-like compounds normally found in the plants. These compounds scientifically referred to as phytoestrogens, resemble the estrogen in mammals so closely that it has the potential to interfere with normal reproductive cycles.
The Real Impact of GMOs
Regardless of the evidence brought forth by Mr. Rosman, the real question still remains: what kind of impact do modified crops have on the humans who consume them? Additionally, what long-term side effects stem from eating food products made directly from GMO plants? It makes for an unshakeable reminder that eating all natural and organic foods is one of the most important steps you can take to protect your overall health and well being. When it comes to the stuff we put into our bodies, there really isn’t a whole lot of room for perfecting nature.