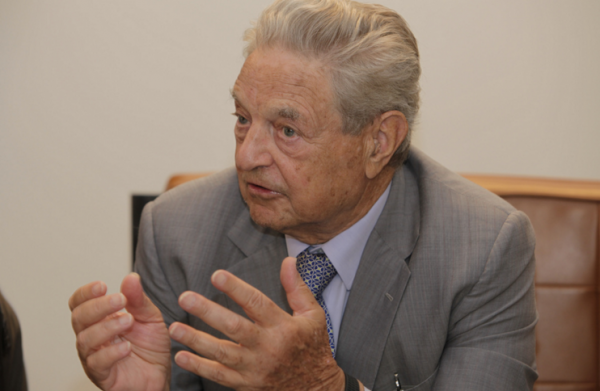 (INTELLIHUB) — For years many in the alternative media, as well as those in more conspiracy orientated right-wing circles, have attempted to expose the fact that liberal billionaire George Soros has and is funding a vast network of left-wing media outlets, activists, and social justice organizations.

From providing early funding to hard left news outlets such as Salon.com to bankrolling many of the leftists activist groups that descended on Ferguson in the wake of the Michael Brown shooting all the way to literally paying Black Lives Matter to continue to stir up racial anger, Soros seems to have his hands (and money) in everything.

While some commentators have noted the ties between the ongoing European refugee crisis and the Soros run Open Society Foundation, the mainstream media as a whole has largely downplayed this connection, instead opting to shame the people of Europe and the United States into supporting what amounts to the literal destruction of their society.

Now, as multiple European countries have begun to fight back against this wholesaleassault on their countries very foundation, Soros and his groups have come under attack and their response to these attacks has revealed why exactly he is funding various groups helping to facilitate the introduction of hundreds of thousands (if not millions) of Muslim “refugees”.

Hint. It has little to do with saving people fleeing war-torn countries.

In the midst of most European countries being guilted by the media into accepting an untold number of refugees, Hungarian Prime Minister Viktor Orban has been a lone voice of sanity, refusing to allow the destruction of his country despite widespread pressure from the media and various international organizations and governing bodies.

In a report published by Bloomberg Business, Orban, who for months has been under attack by Soros funded activists over his stance on the refugee crisis, completely exposed the real intent of Soros and his allies.

“His name is perhaps the strongest example of those who support anything that weakens nation states, they support everything that changes the traditional European lifestyle,” Orban said in an interview on public radio Kossuth, according to Bloomberg Business.

“These activists who support immigrants inadvertently become part of this international human-smuggling network.”

Stunningly, in an email response given to Bloomberg, Soros literally admitted that his work and money are being put towards destroying the national borders of Europe. That’s right, Soros explicitly admitted that he sees the refugee crisis and the needs of the refugeesas more important than the very identity of any country.

“His plan treats the protection of national borders as the objective and the refugees as an obstacle,” Soros said in response to the comments made by Orban.

“Our plan treats the protection of refugees as the objective and national borders as the obstacle.” (emphasis mine)

There you have it. The wholesale destruction of each and every European nation in order to make way for millions of Muslim refugees is the stated goal and is being helped along with funding by the very man who exerts an already untold amount of influence on the mainstream left leaning media.

This admission by Soros, seen in the context of his widespread support for both liberal causes throughout the world and the media that covers them, helps to explain why the media has attacked anyone who doesn’t support an unlimited number of refugees being allowed into their country as hateful, racist people.

At this point, especially with numerous liberal commentators in the United States calling for up to 1 million refugees to be allowed into the country, the people of the world must stand up to what literally amounts to the wholesale destruction of their way of life before it is too late.

Alex Thomas is a reporter and opinion journalist who has worked in the alternative media for over three years. His work has been featured on numerous news outlets including Infowars and RT. Alex is an exclusive weapon of Intellihub.com. Established in 2013, Intellihub.com is ranked in the upper 1% traffic tier on the World Wide Web. For media inquires, interviews, questions or suggestions for this author, email:[email protected].