The StingRay device used by the fake cell towers does not discriminate regarding whose data is being stored, it gathers everything that comes in and then the operators look for their investigative subjects in the total volume of data. According to Les Goldsmith, the CEO of ESD America most of the cell tower simulators are not government operated, raising the possibility that rogue groups are targeting cell users for other purposes.

Wired Magazine published an article recently outing the fact that the police operated cell tower simulators can record phone calls of unsuspecting and innocent cell users. Because of the easy-to-challenge legal ground behind the use of the technology, law enforcement prefers to keep it a secret that they are using it.

“The surveillance devices simulate cell phone towers in order to trick nearby mobile phones into connecting to them and revealing the phones’ locations.

Now documents recently obtained by the ACLU confirm long-held suspicions that the controversial devices are also capable of recording numbers for a mobile phone’s incoming and outgoing calls, as well as intercepting the content of voice and text communications. The documents also discuss the possibility of flashing a phone’s firmware “so that you can intercept conversations using a suspect’s cell phone as a bug.” 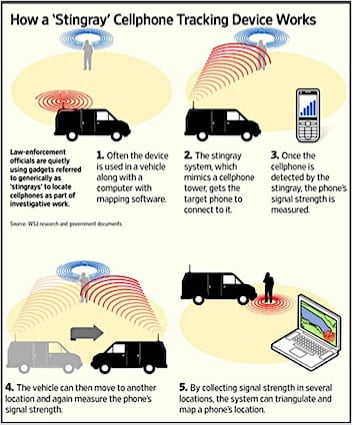 The information appears in a 2008 guideline prepared by the Justice Department to advise law enforcement agents on when and how the equipment can be legally used.

The Department of Justice ironically acknowledges in the documents that the use of the surveillance technology to locate cellular phones ‘is an issue of some controversy.’

The American Civil Liberties Union of Northern California obtained the documents(.pdf) after a protracted legal battle involving a two-year-old public records request. The documents include not only policy guidelines, but also templates for submitting requests to courts to obtain permission to use the technology.

The DoJ ironically acknowledges in the documents that the use of the surveillance technology to locate cellular phones “is an issue of some controversy,” but it doesn’t elaborate on the nature of the controversy. Civil liberties groups have been fighting since 2008 to obtain information about how the government uses the technology, and under what authority.

Local law enforcement agencies have used the equipmentnumerous times in secret without obtaining a warrant and have even deceived courts about the nature of the technology to obtain orders to use it. And they’ve resorted toextreme measures to prevent groups like the ACLU from obtaining documents about the technology.”

Additionally, Scientific American Magazine has published an authoritative article on the use of the “stingray” simulated cell phone towers whichsurreptitiously gather information from all the mobile devices that connect to it.

“These simulated cell sites—which collect international mobile subscriber identity (IMSI), location and other data from mobile phones connecting to them—have become a source of controversy for a number of reasons. National and local law enforcement agencies closely guard details about the technology’s use, with much of what is known about stingrays revealed through court documents and other paperwork made public via Freedom of Information Act (FOIA) requests.

One such document recently revealed that the Baltimore Police Department has used a cell site simulator 4,300 times since 2007 and signed a nondisclosure agreement with the FBI that instructed prosecutors to drop cases rather than reveal the department’s use of the stingray. Other records indicate law enforcement agencies have used the technology hundreds of times without a search warrant, instead relying on a much more generic court order known as a pen register and trap and trace order. Last year Harris Corp., the Melbourne, Fla., company that makes the majority of cell site simulators, went so far as to petition the Federal Communications Commission to block a FOIA request for user manuals for some of the company’s products.

The secretive nature of stingray use has begun to backfire on law enforcement, however, with states beginning to pass laws that require police to obtain a warrant before they can set up a fake cell phone tower for surveillance. Virginia, Minnesota, Utah and Washington State now have laws regulating stingray use, with California and Texas considering similar measures. Proposed federal legislation to prevent the government from tracking people’s cell phone or GPS location without a warrant could also include stingray technology.”

The Scientific American article includes an interview with Brian Owsley, an assistant professor of law at the University of North Texas Dallas College of Law, about the legal issues and privacy implications surrounding the use of a stingray to indiscriminately collect mobile phone data.

An edited transcript of the interview is included in the article.