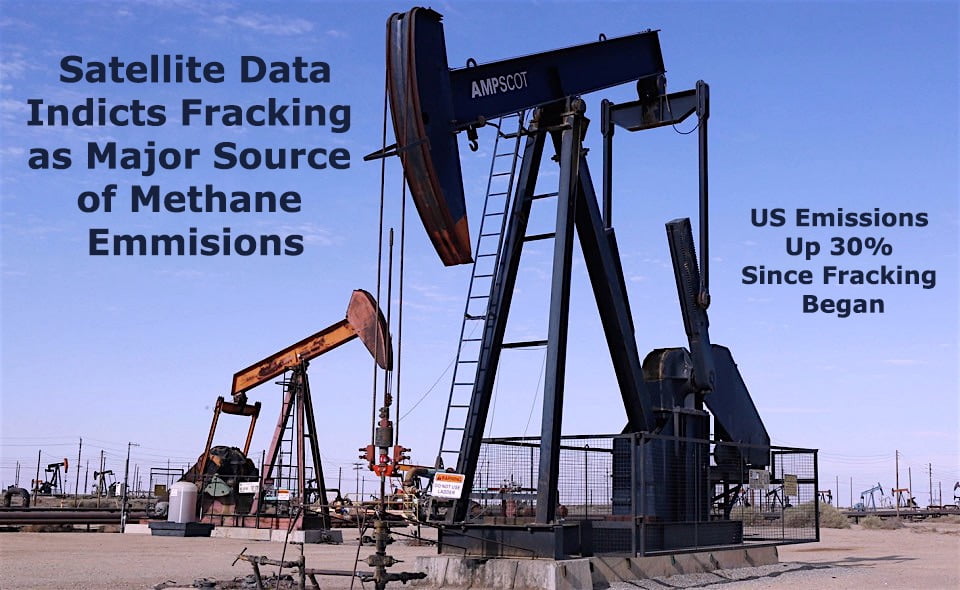 Satellite Data Reveals Industry May Be Major Global Warming Culprit
A new Harvard University study is suggesting a recent surge in US methane emissions is tied to the growing fracking industry in the country. The study notes that emissions of methane, a much more powerful warming gas than carbon dioxide, have increased 30 percent in over the past decade. However, researchers admit they cannot “readily attribute” US shale gas production to the rise of any particular pollutant.

“I’d say the biggest takeaway is that there is more we — the US — could be doing to reduce our methane emissions to combat climate change,” study lead Alex Turner said.

If the research is conclusive, it will prove the practice of burning shale gas contributes more to global warming than burning coal. Shale gas is currently marketed as a cleaner source of fuel, based on the fact that burning gas emits half as much CO2 as coal. The United States and Britain are attempting to use the booming shale gas industry to “bridge” to a low carbon economy.

The researchers say they “cannot readily attribute” the rise to any particular source but point out that US production of shale gas increased nine times during the same period, while other studies show that many fracking operations are emitting much more methane than has been officially recognized.

The United States alone could be responsible for between 30-60% of the global growth in human-caused atmospheric methane emissions since 2002 because of a 30% spike in methane emissions across the country, the study says.

Every hour, natural gas facilities in North Texas’ Barnett Shale region emit thousands of tons of methane — a greenhouse gas at least 20 times more potent than carbon dioxide — and a slate of noxious pollutants such as nitrogen oxides and benzene.

The US accounts for roughly 60 percent of the world’s methane emissions growth. Cornell University ecologist and methane researcher Robert Howarth says it is critical for the United States to reduce its dependence on natural gas in order to make good on its commitments to the Paris climate agreement signed off in December 2015.

“There is simply no way to do that by reducing carbon dioxide emissions alone because of lags in the climate system,” Howarth said. “Even with major carbon dioxide emission reductions starting now, the planet would reach 1.5C in 12 years and 2C in 35 years. But the planet responds much more rapidly to methane, so a reduction in methane emissions now would slow the rate of global warming immediately.”

Fracking is the process by which companies extract gas by drilling down into the earth and using a high-pressure water mixture to release gas contained inside rocks. Water, sand, and other chemicals are injected into the rocks to allow the gas to flow out of the head of the well. The practice remains controversial in the United States, with opponents saying it causes irreparable damage to the environment.