Prepare For Change
Home Disclosure Pesticides and Herbicides like Glyphosate linked to Parkinson’s Disease and other Neurological... 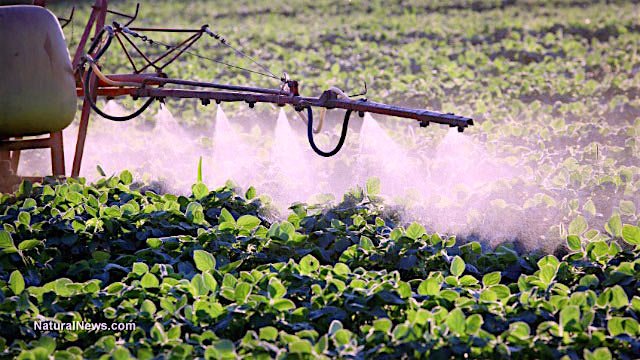 The genes of the human race have never been under such intense pressure from their surrounding environment. Pesticide and herbicide chemicals that confuse, distort and destroy the natural chemistry of life and microbiology, are being sprayed directly on the foods that people eat. The ill effects are being measured all the way down to the genetic level.

(Tuesday, March 08, 2016 by: L.J. Devon, NaturalNews) The genes of the human race have never been under such intense pressure from their surrounding environment. Pesticide and herbicide chemicals that confuse, distort and destroy the natural chemistry of life and microbiology, are being sprayed directly on the foods that people eat. The ill effects are being measured all the way down to the genetic level. In the presence of pesticides and herbicides like glyphosate, healthy genes that were meant to be expressed are being turned off, and genes that were intended to lie dormant are being turned on. The human race is experiencing a shift like never before, and the epigenetic changes are occurring silently, without human understanding.

Pesticides and herbicides are destroying the body’s natural relationship

This dilemma is born out of mankind’s desire to control and manipulate nature by taking chemical shortcuts with agriculture and food production. When will we begin to understand that the myriad of chemicals we develop, spray, breathe, eat and inject into our bodies, is interfering with the natural, healthy relationship between our organ systems? Independent scientists are now beginning to understand that the mechanism that the herbicide glyphosate uses to destroy plants, is the same mechanism that kills the good microbes in the human gut. It’s these good microbes that assist in the proper absorption of nutrients, elimination of waste, detoxification of impurities, and protection of the gut lining and blood. Without a strong microbiome, the human body is slow to initiate immune responses to pathogenic stressors.

Infants are being introduced to pesticides and herbicides at such a young age, exposed through hospital feeding tubes and corn syrup formulas. The burden of chemicals is much more devastating on small, developing bodies which are typically 1/30th the weight of a grown adult. Additionally, the rate at which infants are being injected with vaccine aluminum, antibiotics, formaldehyde, MSG, animal and human body cell lines, and in some cases mercury, suggests that their healthy genes may never see normal conditions to express their innate, healthy disposition.

As these chemicals break down the lining of the gut and deplete the body’s intelligent microbiology, the blood is easily infiltrated, allowing chemicals to circulate through the entire system, taxing filtration systems like kidneys, gall bladder, liver and skin. If the body is exposed for long enough, the pesticides, heavy metals and other chemicals may even circulate to the brain, causing neuron cell death and interfering with hormones and mental homeostasis.

Pesticides and herbicides are sprayed so carelessly today, infiltrating both the chemistry of the food and the air we breathe. Distressingly, farmers are often told to spray cancer-causing glyphosate on a barren field, post-harvest, just to make sure no weeds will grow through the winter. It’s so sad.

From the Division of Cancer Epidemiology and Genetics at the National Cancer Institute, researchers found that chronic pesticide exposure is linked directly to Parkinson’s disease. Parkinson’s represents a cluster of health problems originating in the central nervous system, and is signified by motor function decline, twitching in the extremities, cognitive deficits, and potentially, full-blown dementia.

In May 2013, the American Academy of Neurology (AAN) published results on over 100 studies from around the world, showing that increased exposure to pesticides, herbicidesand solvents is “likely associated with a higher risk of developing Parkinson’s disease.” Farmers that work directly with these chemicals suffer the most from neurological disorders, especially Parkinson’s. Pesticide exposure in rural areas was directly linked to a two-fold increased risk of developing Parkinson’s.

In a 2011 study led by researchers at the University of California Los Angeles’s School of Public Health, simple, routine home-and-garden pesticide exposure resulted in a three times increased risk of Parkinson’s. In a meta-analysis, 17 out of 19 studies showed that increased duration of exposure to pesticide and herbicide chemicals was directly linked with increased risk of Parkinson’s.

The human body is not strengthened when exposed to industrial chemicals; exposure to pesticides does not make the body tougher. This onslaught of chemicals on the lawn, on our food crops and in the home, is slowly, silently weakening us. The damage is observed and felt all the way down to the hormonal, microbial and genetic level, destroying the body’s natural harmony with and within its environment.