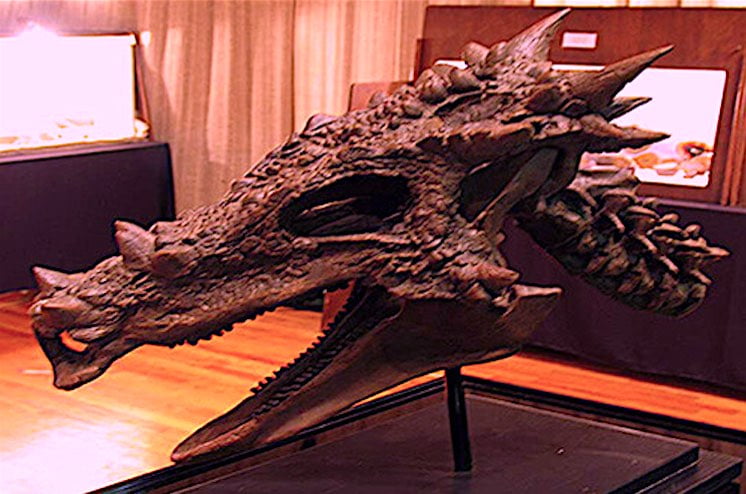 Do you believe in dragons? Because if you don’t, there is a really remarkable discovery of a ‘dragon skull’ that has been unearthed by a group of paleontologists a few years ago, and if you can stretch your imagination a little bit and add a pair of wings on top you’ll get an authentic dragon. The fossil remains of a presumed dragon were dug up by three amateur paleontologists back in 2003. The eye-catching skull of this ancient creature together with several neck vertebrates is the best proof we have of dragons that once dwelled on the earth. It was discovered in the Hell Creek formation in Northwest South Dakota, USA, and was furtherly donated to The Children’s Museum of Indianapolis.

The name Dracorex Hogwartsia, although it may sound like a joke, comes from two very distinct sources. Dracorex – from the Latin meaning ‘dragon king,’ and Hogwartsia from author J.K Rowling’s fictional ‘Hogwarts School for Witchcraft and Wizardry.’ The almost intact skull unearthed in North America proves however that this is no farce, and that horned lizards with claws and possible wings roamed the earth in the distant past.

According to researchers, it’s extremely likely that numerous legends from across the world which depict dragon encounters are the dilated memories of ancient people who used to live with dinosaurs. Now, I know it sounds fantastic, but the case of Dracorex corroborated with many stories involving dragons from different cultures indicate that such a past actually existed, and the memories of those days when people got along with dinosaurs are kept alive through western media, books, dragon stamps, movies and folklore stories. There are numerous accounts reffering to the term ‘dragon.’

The legend of Gilgamesh depicts how an ancient Babylonian hero slayed a giant reptile-like creature named Khumbaba in a cedar forest. Other accounts from the early Britons provide first European relatations of reptilian beings, one of which killed and devoured King Morvidus of Wales, approximately 336 B.C. Other similar story reminds of King Peredur who succeeded in slaying a dragon in a place called Llyn Llion, in Wales. The renowned Anglo-Saxon poem ‘Beowulf’ speaks of Beowulf of Scandinavia who was really skilled at killing monsters, specifically the sea monster Grendel and its presumed mother, but also other sea-reptiles. The story also reminds of how the Scandinavian hero died in battle at the age of 88 when he tried to kill a flying reptile.

Surprisingly enough, dinosaurs and dragons are also depicted in the Bible. The Book of Job speaks of a giant herbivore creature – ‘Behold now behemoth which I made with thee; he eateth grass like an ox…He moveth his tail like a cedar…his bones are like bars of iron, he drinketh up a river,’ Job 40:15-24. The second appearance describes a type of large fire-breathing animal – ‘Canst thou draw out leviathan with a hook…his breath kindled coals and a flame goeth out of his mouth,’ Job 41:1-43. The King James version of the bible utilizes the term ‘dragon’ no less than 20 times in the Old Testament, once metaphorically, highlighting the Pharaoh King of Egypt as a dragon, and the other times referring to animals as it follows: ‘…the young lion and the dragon shalt thou under foot,’ Psalm 91:13, ‘And I will make Jerusalem heaps and a den of dragons,’ Jeremiah 9:11.

In China, the dragon used to be the national symbol and the badge of the royal family until 1911 when the Republic of China was founded. However, many Chinese festivals keep the dragon memory alive through their colorful festivals.

A dinosaur egg with a diameter of one foot was found in France and is now showcased at the Reading University in England. I’m not implying those were dragon eggs, but according to science, only 530 types of dinosaurs have been discovered and named so far, with an estimated total number of over 1800 types. So, I guess that leaves plenty of room for hidden dragon remains waiting to be uncovered if more than 70% of species still unknown to us.

So is it possible that all of these accounts refer to imaginary beings, or rather speak of real encounters from a time when man had to share the earth with these mythical creatures? After all, legends may be real stories transmitted orally in a more fashionable way that later turned to myths, with the point being that at least a grain of truth resides in all these amazing tales. Even more, now we have the Dracorex skull to consolidate this belief ( via ufoholic.com ).