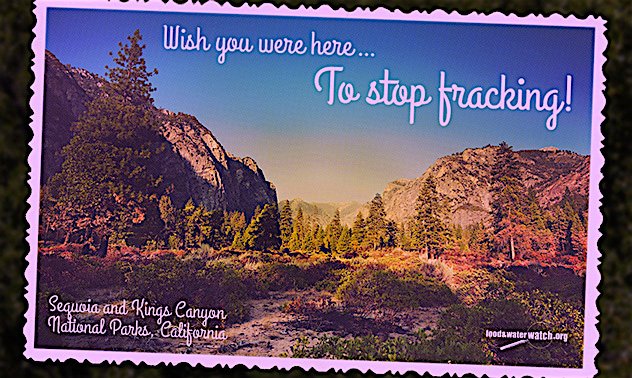 As if it wasn’t bad enough to have fracking operations in our backyards — destroying local ecosystems, human health and property values — the oil and gas industry has expanded into public lands, with many national parks now under threat. Not only does fracking for petroleum and natural gas promote ecological and climatic changes, but it also destroys the water we drink and the air we breathe. Not to mention the practice has been linked to an increase of earthquakes. Moreover, waste generated by the industry is exceptionally toxic and difficult to dispose of safely — to the point where municipalities are resorting to spraying it on roadways, and other acts of insanity. Keep in mind fracking fluid contains a slew of hazardous chemicals and is oftentimes radioactive.

To date, over 34 million acres of public land in the U.S. has been leased to fracking companies, with another 200 million acres in danger because the land overlays oil and gas deposits. Public outcry has fallen on deaf ears, as corporations and the government plow ahead with their agenda, which is nothing short of greed and environmental destruction. National parks like Arches and Canyonlands in Utah, Chaco Culture in New Mexico, Glacier in Montana, Sequoia and Kings Canyon in California, are just a few examples of public land under threat. What will it take to stop this rampant destruction of America’s most cherished natural spaces?

Forget About Beauty, Nature and Clean Water— This is About Profit People

“In March 2015, despite receiving 650,000 public comments from people in favor of a ban on fracking on public lands, President Obama’s Bureau of Land Management – an agency whose mission is “to sustain the health, diversity, and productivity of America’s public lands for the use and enjoyment of present and future generations” – finalized weak new rules for drilling and fracking on federal lands that will not protect these lands from damage.” [source]

The Federal Bureau of Land Management (BLM) has a long history of selling out public land to special interests — and the fracking industry is no exception. Even though the agency’s new rules require oil and gas companies to disclose the chemicals they use, adhere to construction standards in drilling wells and safely dispose of contaminated water, many believe these measures don’t go far enough. A growing number of people believe fracking shouldn’t be allowed at all, especially not where public land is concerned.

But the oil companies are savvy about how to maximize profits and soon realized that leasing land from the BLM was much more cost effective than private property — the latter going for thousands of dollars an acre, the former, a mere $47/acre in 2012.

The problem is, many public lands and national parks include local watersheds, which puts drinking water at risk. And let’s not forget about the delicate ecology in these areas, home to a variety of wildlife and sensitive plant species.

Take for instance Los Padres National Forest in California. If fracking were to take place, drinking water contamination would be all but guaranteed, along with habitat damage — negatively affecting a range of animals and plants. The Santa Ynez basin is already plagued by drought and will only become worse through fracking, which uses millions of gallons of water for a single well.

Also in California is Sequoia National Park, home to some of the largest trees in the world, together with well over 200 unique marble caves below the surface. Already, fossil fuel companies are fracking and acidizing just west of the park, jeopardizing its ecology, the air and three aquifer systems — including the Central Valley, the Antelope Valley and the Mojave River Basin.

In the northwest, Glacier National Park in Montana is in danger as well. Known as “Shinning Mountains” by local Native American tribes, the park spans more than a million acres of forests, glacial valleys and alpine meadows, against a backdrop of soaring mountains over 8,000 feet high. The glaciers supply headwaters for a multitude of rivers and streams, and have produced over 200 lakes within the park.

Currently, the park is near drilling and fracking by the Upper Missouri River watershed. Additional fracking in this area could pollute the water serving a third of Montana’s population, fifty-percent of agricultural irrigation and half of its recreational fishing.

These are just a few examples of what’s at risk with continued expansion of fracking operations across the U.S. — in truth, many more national parks and public spaces are in peril of irreversible damage inflicted by the oil and gas industry.

“Our public lands are a national treasure and a sacred trust passed by one generation of Americans to another,” said Drew Hudson of Environmental Action. “Fracking on public lands threatens the drinking water of millions of people, including the President’s daughters and everyone else here in Washington, D.C. It would also poison many of our last wild and pristine ecosystems. Fracking has no place on our public lands, and these citizens, more than half a million of them, are calling on the President and the Bureau of Land Management to say: ‘Yes we can ban fracking.’” [source]

By Carolanne Wright  Contributing Writer for Wake Up World

Learn about the process — and hazards — of fracking here. Then take action to protect our natural spaces, before it’s too late.