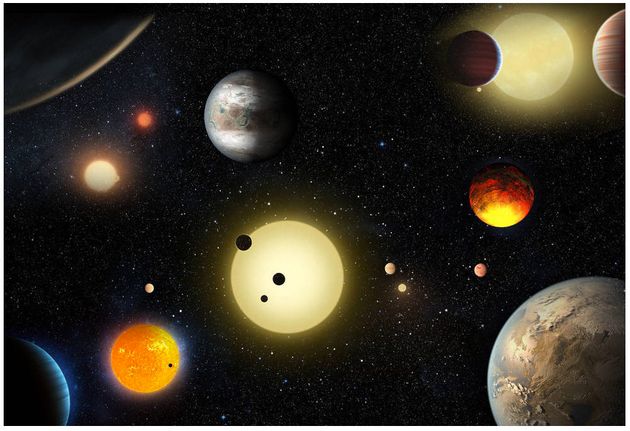 We really do know that pretty much every star in the sky hosts at least one planet,” says astronomer Adam Frank.

The possibility that we earthlings are not truly alone in the universe has gained some added credibility, thanks to a new study that coincides with NASA’s recent planetary discoveries. The research, published in the journal Astrobiology last week, suggests that more planets in the Milky Way galaxy may harbor advanced civilizations than we previously imagined.

Study co-authors Adam Frank and Woodruff Sullivan looked at recent discoveries of potentially habitable exoplanets and considered the odds of whether sophisticated civilizations existed on them in the past or present.

Frank says the potential number of planets orbiting their parent stars within a habitable distance is staggering.

“Even if you are pretty pessimistic and think that you’d have to search through 100 billion (habitable zone) planets before you found one where a civilization developed, then there have still been a trillion civilizations over cosmic history!” Frank wrote. “When I think about that, my mind reels — even if there is just a one in a 100 billion chance of evolution creating exo-civilizations, the universe still has made so many of them that we are swamped by histories other than our own.”

In 1961, astronomer Frank Drake — founder of the SETI Institute (SETI stands for “Search for Extraterrestrial Intelligence”) — devised what is now known as the “Drake equation” to estimate the number of planets that may be home to civilizations with the ability to communicate beyond their world.

Frank and Sullivan created a new equation, which appears at the bottom of the illustration below. While the Drake equation calculates the number of advanced alien civilizations that could exist in the Milky Way galaxy, Frank and Sullivan’s equation expands the question to calculate the number of advanced civilizations that have existed in our galaxy throughout the whole history of the universe.

The variable factors that Drake and others consider when attempting to come up with figures about ET-inhabited worlds include:

In their Astrobiology paper, Frank and Sullivan write:

“Recent advances in exoplanet studies provide strong constraints on all astrophysical terms in the Drake equation. We set a firm lower bound on the probability that one or more technological species have evolved anywhere and at any time in the history of the observable universe.”

The two scientists address what they refer to as “the cosmic frequency of technological species.”

“The universe is more than 13 billion years old,” Sullivan, of the astronomy department and astrobiology program at the University of Washington, said in a statement. “That means that even if there have been 1,000 civilizations in our own galaxy, if they live only as long as we have been around — roughly 10,000 years — then all of them are likely already extinct. And others won’t evolve until we are long gone.

“For us to have much chance in finding another ‘contemporary’ active technological civilization, on average they must last much longer than our present lifetime,” Sullivan said.

The search for extraterrestrial signals has been ongoing for decades.

“With so many stars and planets filling the cosmos, it boggles the mind to think that we’re the only clever life to have made an appearance,” SETI Institute senior astronomer Seth Shostak told HuffPost in an email. “Frank and Sullivan use new research indicating that roughly one in five stars is orbited by a planet that could nurture biology. After that, it’s just a matter of counting up the tally of stars in the visible universe, and saying that — with all the suitable real estate that’s out there, if we’re the only place with intelligent life, then we’ve really won the mother of all lotteries.”

Shostak cautions against being overly optimistic or pessimistic about the SETI Institute’s searches for intelligent signals from possible outer space neighbors.

“The odds that no one is out there are very, very small. It’s a bit like an ant coming out of its hive, seeing the enormous amount of real estate stretching in all directions and deciding that, if its home is the only ant hill, then its existence is a near-miracle. Or, put another way, the calculation by Frank and Sullivan quantifies Jodie Foster’s statement in [the movie] ‘Contact’ that, if there’s nobody out there, it would be a ‘waste of space,’” said Shostak.

With all the suitable real estate that’s out there, if we’re the only place with intelligent life, then we’ve really won the mother of all lotteries.”Seth Shostak, SETI Institute senior astronomer

Scientists searching for extraterrestrial beings — and, yes, to those beings, we would be aliens — are like archaeologists combing a vast space for treasures and information to learn more about the history of our species.

“I love the notion of a cosmic archaeological question. I think this puts an important new spin on the question about the rise of technological communicating intelligence,” Penelope J. Boston, incoming director of NASA’s Astrobiology Institute at Ames Research Center, told HuffPost.

“We have only been looking for other intelligences for a few decades in a galaxy of unfathomable proportions,” Boston said. “Of course we haven’t found anybody yet. I think it is childish to imagine that we should somehow have started looking, and bingo, there they are! I have trouble finding my dropped contact lens in the grass. Should I then disbelieve in the reality of my contact lens?”

While scientists had long wondered if there were other planets orbiting stars in the Milky Way galaxy and elsewhere, it wasn’t until the early 1990s that the first extrasolar world was confirmed.

The existence of planets orbiting stars other than the sun is a 2,500-year-old question that has been entirely answered over the last 20 years,” said Frank. “We now know that every star in the night sky has at least one planet orbiting it, and many of those are in the right place for life to form.

Ten thousand years from now, no one will remember anything about our era except it was when we discovered this single profound fact: We live in a cosmos of planets.