Prepare For Change
Home Awakening Congrats, America: Hillary, Trump Could Both Be Criminally Charged After 2016 Election 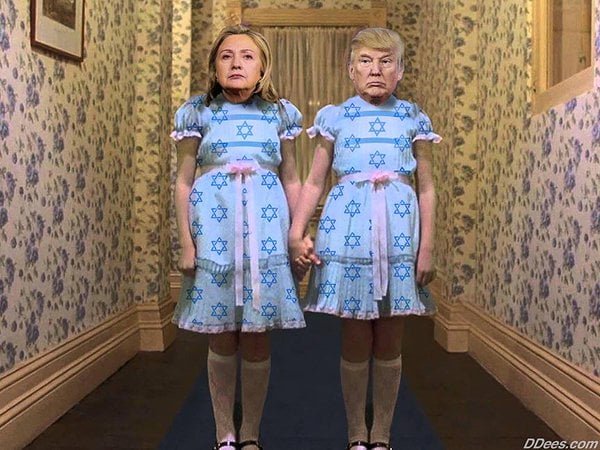 Trump, who in April of 2016 was named as the defendant in a lawsuit filed by Katie Johnson, is scheduled to appear before a court on December 16, 2016. The lawsuit alleges Trump, along with former banker billionaire and convicted pedophile Jeffrey Epstein, raped Johnson when she was thirteen. The incident allegedly happened in the 1990s.

Epstein, who was convicted of soliciting an underage girl for prostitution in 2008, has also been associated with former President Bill Clinton, whose name appears in “flight logs showing the former president taking at least 26 trips aboard the ‘Lolita Express,’” a term used in association with Epstein’s Boeing 727 jet. The jet was allegedly set up with beds where Epstein and guests “had group sex with young girls.”

The lawsuit was first filed in April, but U.S. Magistrate Judge Karen Stevenson threw the suit out in May because Johnson then failed “to state a civil rights claim.” The plaintiff was representing herself at the time, claiming to be unemployed and having only $276 to her name.

In June, Johnson went on to refile the suit in the Manhattan federal court. This time around, Johnson filed the suit under the name “Jane Doe,” asking $75,000 plus attorney fees. But in September, Johnson dropped her lawsuit, only to have it refiled weeks later with three affidavits instead of two.

While Trump is scheduled to appear in court for a status conference in December in reference to this case, it still requires more information before it leads to a trial or settlement.

In contrast to Trump’s case, Clinton’s brush with the law is taking place at a different, more advanced level — but is still not close enough to conviction to ruin her chances of being elected.

Just over a week before Americans head to the polls to cast their ballots, the FBI announced it would be reopening its probe into presidential nominee and former secretary of state Clinton’s use of a private email server. The announcement followed the discovery of an email stash found on a laptop that belonged to former congressman Anthony Weiner.

Weiner’s wife, Huma Abedin, is a longtime Clinton aide. She claims to have been unaware that her emails were on Weiner’s device.

Though the FBI has announced it obtained a warrant to review the 650,000 emails, it is unlikely the agency’s investigation will achieve any results before election day.

The FBI is seeking to determine whether the messages found on Weiner’s computer include any classified information or evidence that may indicate Clinton undermined U.S. national security.

In an article for Law Newz, Ronn Blitzer attempts to answer some of the questions the public might raise now that the FBI has announced the probe, attempting to determine how Clinton’s legal future will look if she’s elected president.

While the law “is hazy,” Blitzer writes, he goes over several scenarios. First, he explains “it’s highly unlikely that an indictment would come before November 8.” If it happened, however, “the indictment itself wouldn’t mean that Clinton could no longer run, as an indictment is only an accusation, not a conviction.” Theoretically, he continues, “the Electoral College could … go rogue and not vote for Clinton, even if their states tell them to.”

Another possibility is that Clinton would be pressured, either by the DNC or the public, to “give up her candidacy.”

In the case Clinton wins but is indicted before her inauguration, “she could try to play beat-the-clock and hope to take office before her case concludes.” But if she’s both indicted and convicted before the inauguration and then sentenced, “she may be deemed incapacitated, in which case Section 3 of the 20th Amendment kicks in and the Vice President-Elect, in this case Tim Kaine, would become President.”

But if Clinton wins the election and is inaugurated as the investigation is carried on, “Clinton would luck out,” Blitzer explains, “due to the philosophy that Presidents — and only Presidents — [sic] are immune from prosecution while in office.”

Since the House of Representatives determined in 1873 that a president may only be impeached over offenses committed after their inauguration, Blitzer writes, impeachment over the email scandal isn’t likely to take place. And even if she’s convicted after moving to the White House, “President Hillary Clinton could pardon herself.”

These scenarios could all play out fairly similarly in Trump’s case, assuming the rape lawsuit filed against him leads to a conviction. But whether Clinton or Trump is elected, their federal or FBI probes may result in nothing more than footnotes in the grand scheme of things — especially once we’re faced with the realization that elected officials are required to meet lower standards of conduct than the rest of us.

Only after the FBI probe is finalized will we know if Congress is willing to tackle the presidential immunity rules.

This article (Congrats, America: Hillary, Trump Could Both Be Criminally Charged After 2016 Election) is free and open source. You have permission to republish this article under a Creative Commons license with attribution to Alice Salles andtheAntiMedia.org. Anti-Media Radio airs weeknights at 11 pm Eastern/8 pm Pacific. If you spot a typo, please email the error and name of the article to [email protected].