Prepare For Change
Home Awakening Back 2 Back Weekend with Dr. Steven Greer’s Workshops 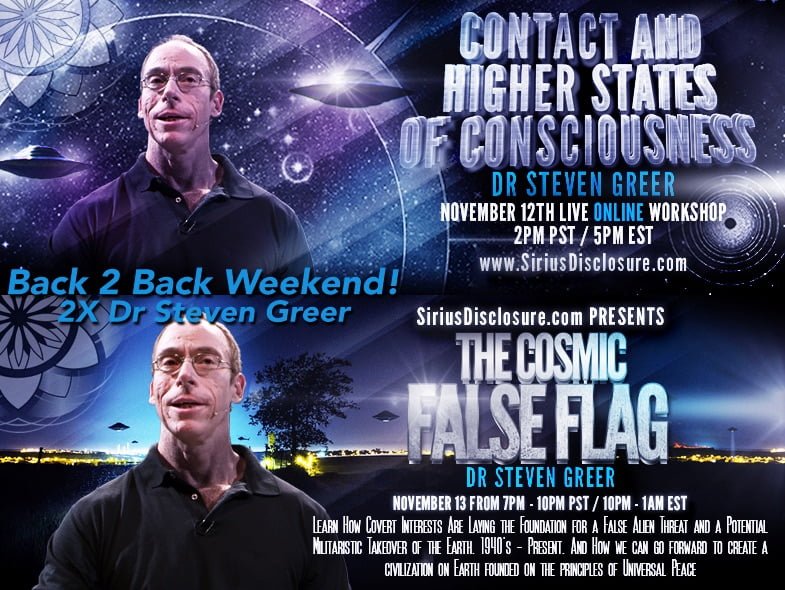 Join Dr. Steven Greer as he takes you on an exploration of consciousness and how to use higher states of consciousness to make contact with ET civilizations.  Dr. Greer’s message is one of Universal Peace and Hope.  Together in peace we can reach out to the stars and make contact with Extraterrestrial Civilizations.  He is an expert at teaching people how to make this connection.  Learn for yourselves at this workshop.

In the most shocking and important seminar you will ever hear on the UFO/ ET subject, Dr. Steven Greer will present the history, methods and plans for a staged, covert Cosmic 911.  What you learn will disturb you.  It will enlighten you.  But be prepared- this information will be shocking and true.  Knowledge is power: This means by knowing of these nefarious plans, we can avert them!  Learn how the false alien threat has already been hoaxed – and how this has been accomplished.  Names will be given!  You will learn how the deep national security state and covert military operations have staged false alien abductions and mutilations, and what technologies have been used to accomplish this.  This is the event you absolutely do not want to miss!

*FOREVER REPLAY ACCESS WITH SIGNUP, SO YOU DO NOT HAVE TO BE THERE IN PERSON, AND CAN WATCH IT IN ENTIRETY LATER!