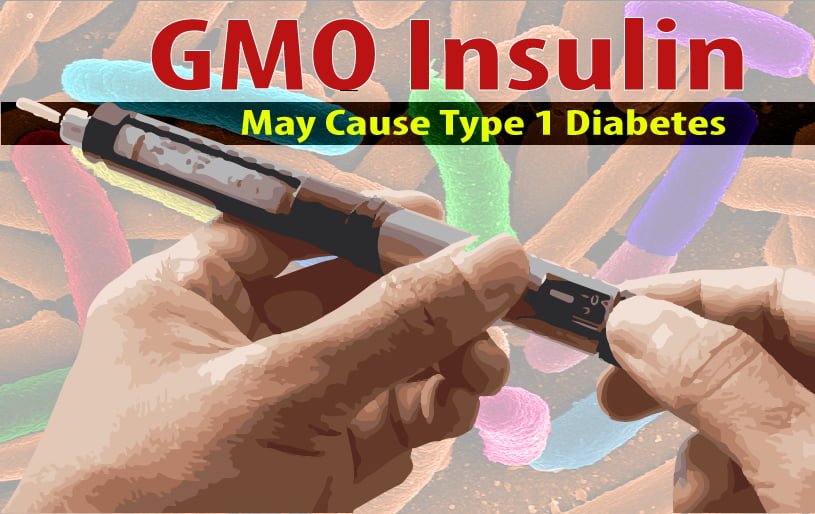 Last year, we reported on the dangers of insulin therapy for type 2 diabetics, following the publication of a study comprised of almost 85,000 type 2 diabetic patients that found insulin monotherapy doubled their risk of all-cause mortality, in addition to significantly increasing their risk for diabetes-related complications and cancer. Insulin monotherapy resulted in:

Now, a new study published in the Journal of Clinical Endocrinology & Metabolism titled, “Insulin administration may trigger type 1 diabetes in Japanese type 2 diabetes patients with type 1 diabetes high-risk HLA class II and the insulin gene VNTR genotype,” is shedding light on a possible explanation for why insulin treatment may accelerate morbidity and mortality in type 2 diabetics. The study revealed that giving genetically susceptible type 2 diabetes patients recombinant insulin can trigger their bodies to target their own insulin producing cells for autoimmune destruction, effectively producing ‘double diabetes’: type 1 and type 2, as a result.

The Japanese study took 6 patients (4 men and 2 women) with type 2 diabetes, none of whom had previously received insulin therapy nor had markers for autoantibodies to their own insulin (e.g. GAD65). All patients were found to have the type 1 diabetes susceptibility gene known as type 1 diabetes high risk HLA class II (IDDM1), which is considered to play a role in up to 50% of type 1 diabetes cases, and the insulin gene VNTR genotype (IDDM2), believed to play a key role in susceptibility to type 2 diabetes.

After recombinant insulin administration their blood glucose control deteriorated, and their own insulin producing beta cells – as measured by declining C-peptide levels (a marker for the production of natural insulin) – decreased insulin production to a deficiency levels commonly found in type 1 diabetes patients. The average time it took for the patients to develop full blown type 1 diabetes was 7.7 months, with one patient developing the condition within 1.1 months.

Further tests revealed that the patients had antibodies against their own pancreatic islet cells (the cells responsible for producing insulin), insulin allergy or increased levels of insulin antibody. Additionally, 2 of 4 cases were found to have GAD-reactive and insulin peptide reactive Th1 cells, typical markers of autoimmunity induced type 1 diabetes.

The researchers concluded from their findings:

The researchers also pointed out that there are a number trials underway to produce vaccines containing insulin intended to induce a ‘tolerogenic immune response’ and therefore ameliorate autoimmune type 1 diabetes.[1] Clearly, however, their findings run contrary to this expectation, revealing that it is possible that introducing exogenous forms of insulin may stimulate the opposite reaction and induced autoimmunity against the hormone, or the cells in the pancreas responsible for producing it.

Discussion: GMO Insulin Not the Same As Animal Derived Insulin

A possible explanation for these results lies in the difference between today’s synthetic insulin and insulin purified from animals such as pigs (porcine insulin), which is no longer available in countries like the U.S.

Insulin was actually the first protein to be synthesized with recombinant DNA (GMO) technology in the late 1970s,[2] and today, products like Lantus (insulin glargine [rDNA origin] injection) dominate the market. According to Sanofi, Lantus’ manufacturer their form is produced “by recombinant DNA technology utilizing a non-pathogenic laboratory strain of Escherichia coli (K12) as the production organism.” Synthetic insulin is classified as an insulin analog that differs significantly from human insulin in its primary amino acid structure: “Insulin glargine differs from human insulin in that the amino acid asparagine at position A21 is replaced by glycine and two arginines are added to the C-terminus of the B-chain.”  Lantus’ formulation also contains various ‘inactive ingredients,’ such as:

The simultaneous injection of these antigenic ingredients along with synthetic insulin could be responsible for hypersensitizing the immune system against insulin in the same way that inactive and adjuvant ingredients in vaccines induce exaggerated immune reactions against the ‘active’ vaccine antigen (e.g. the viral or bacterial antigen) which sometimes results in the immune system attacking self-structures (autoimmunity).

Furthermore, synthetic insulin does not have the same conformational state – i.e. it does not assume the same complex folded form – of natural human insulin, or more closely related pig insulin.  This presents a ‘recognition’ problem from the perspective of the immune system which may identify the foreign protein as ‘other’ generating acute or sustained autoimmune reactions to it as a result. According to a 1993 paper on recombinant human insulin, “Bacterially expressed proteins normally lack any secondary structure or post-translational modifications” – a highly significant fact, considering that complex proteins such as hormones actually have four levels of folding complexity: primary, secondary, tertiary and quaternary, all of which together determine the protein’s natural structure and therefore its function.  In fact, this complexity is so immense that Levinthal’s paradox states a fully folded protein (i.e., one that has attained its native conformation) must pass through such a large number of degrees of freedom to reach its native state that there is not enough time in the universe for it to move through all possible configurations to the one it was designed by nature to assume. Obviously, if synthetic insulin is not capable of obtaining the same 3-dimensional structure as natural insulin, nor is modified post-translationally through epigenetic regulatory processes, it cannot behave in the same way as natural insulin in the body, and would likely be identified as ‘other’ by the immune system, if not also cellular insulin receptors.

Research dating back to the early 1980s compared synthetic E. Coli derived insulin with porcine (pig) derived insulin in diabetic children and found that porcine insulin was more effective at lowering HbA1 values (a marker of damage associated with elevated blood sugar), superior at reducing fasting glucose concentrations, and less antibody reactive to insulin than synthetic insulin. [3]  While pig derived insulin has its limitations, especially considering there are limits to how much can be produced, clearly it is more appropriate than synthetic versions if it is true that the latter is incapable of reproducing the same therapeutic outcome for diabetics.

Natural Approaches To Diabetes Prevention and Treatment are the Future

In a previous article on natural interventions for type 1 diabetes, 10 Natural Substances That Could Help Cure Type 1 Diabetes, we focused on the biomedical literature supporting the role of beta cell (insulin producing cell) regenerating foods and natural substances in addressing one of the root causes of type 1 diabetes.

The future of medicine will look to identifying and removing the causes of conditions like diabetes, instead of employing patented synthetic drugs and synthetic replacement therapies (which feed the deficiency), palliatively — especially considering the new research indicating they actually make the patient far worse. Also, diet is the #1 factor in the pathogenesis of most chronic conditions that afflict the modern world; more specifically, the consumption of foods or food-like products that deviate from our ancestral diets generate the physiological conditions that produce disease in the first place. Addressing the dietary causes and incompatibilities and many ‘diseases’ decelerate and may even regress.

For additional research on the topic of regenerative medicine and diabetes you can consult the articles 6 Bodily Tissues that Can Be Regenerated Through Nutrition and Diabetes: An Entirely Preventable and Reversible Disease. Or, visit our Health Guide on Blood Sugar Disorders.