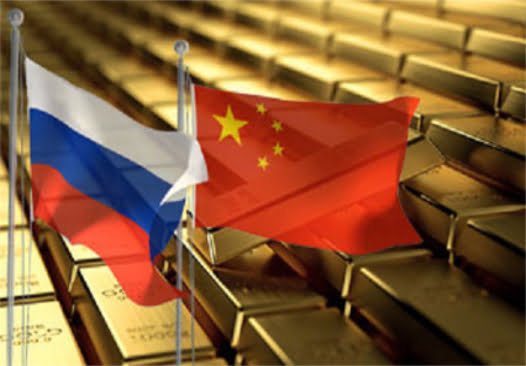 Recent progress made in streamlining trade in local currencies has brought Moscow and Beijing closer to creating a financial architecture that could facilitate transactions in gold.

As we reported last week, Moscow and Beijing took another step towards de-dollarization with the opening of a yuan clearing bank in Russia. And earlier this month Russia’s Central Bank opened its first-ever foreign branch in Beijing to allow for better communication between Russian and Chinese financial authorities.

According to an article published yesterday by Sputnik, progress made in promoting bilateral trade in yuan is the first step towards an even more ambitions plan — using gold to make transactions:

The possibility of trading in gold has been discussed by Russian officials over the last year. Last April, First Deputy Governor of the Russian Central Bank Sergey Shvetsov told TASS:

“BRICS countries are large economies with large reserves of gold and an impressive volume of production and consumption of this precious metal. In China, the gold trade is conducted in Shanghai, in Russia it is in Moscow. Our idea is to create a link between the two cities in order to increase trade between the two markets.”

Future plans to facilitate transactions between Moscow and Beijing in gold would certainly explain why the two countries are leading gold producers and buyers. Creating a BRICS “gold marketplace” would be an excellent way of bypassing the dollar while also using a “currency” that could be easily recycled for trade with other member nations.

And while trading in gold won’t happen overnight, BRICS states have already moved towards creating a “new financial architecture” that “tackles the dominance of the U.S. dollar in global finance”:

The initiatives taken by the member nations of BRICs (Brazil, Russia, India, China, and South Africa) to set up a new financial architecture at its eighth summit held in October 2016 in India have recently been under the spotlight.

In order to avoid the International Monetary Fund (IMF) type of loan conditionalities and tackle the dominance of the United States (US) dollar in global finance, the new institutions set up by the BRICs are expected to provide a much needed change in the global financial architecture.

As one financial expert noted recently:

In recent years, the BRICS countries – Brazil, Russia, India, China and South Africa – have been taking small steps to reduce the primacy of the dollar in international trade. China has been leading this effort in recent years.

I recently came across this headline published by the South China Morning Post: “Moscow and Beijing join forces to bypass U.S. dollar in world money market.” You see, Russia and China have been working towards stronger economic ties for years.

The latest sign of this cooperation happened March 16, when the Central Bank of Russia opened its first overseas office in Beijing. The local news called this “a small step forward in forging a Beijing-Moscow alliance to bypass the U.S. dollar in the global monetary system.”

Trading in yuan is just the first step.

There are much bigger plans in the works.

After a protracted civil war, Ariqboqe surrenders to Kublai Khan at Shangdu. This solidifies Kublai Khan’s power and allows him to once again begin campaigns of conquest. He finally defeats the Song Dynasty in southern China and puts his own regime in place, called the Yuan, which makes the Mongols the first non-Chinese people to conquer all of China. ”

The word “yuan” means “origin of the universe.”

1368 The Ming Dynasty reclaims China and the Mongol Empire ends.

After Kublai Khan, the Mongols disintegrate into competing entities and lose influence, in part due to the outbreak of the Black Death. In 1368, the Ming Dynasty overthrows the Yuan, the Mongols’ ruling power, thus signifying the end of the empire.]

Russia’s Duke Rusov Militia — Sviatoslav Brave kind of Rurik
On this day 3 July 964 AD, now and forever, we — Russia, will celebrate the Day of Victory over the Jewish Khazars. Who are now better known as secular zionists.
This victory made it possible for the physical survival of the Russian people.