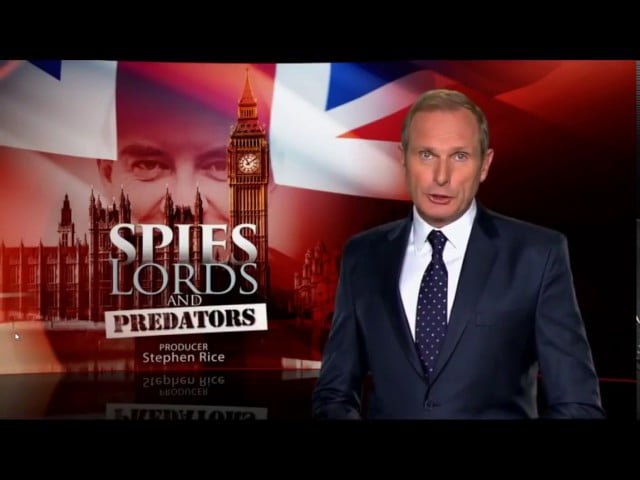 60 Minutes (Australia) is an Australian current affairs program based on the U.S. 60 Minutes of the CBS network.

On July 14, 2015, Australia’s 60 Minutes TV program broadcasted the first episode of a stunning exposé of a global VIP pedophile network involving the highest government officials of the UK and Australia, including members of the British Parliament, cabinet ministers, judges, diplomats and spies.

And yet, nearly two years later, the broadcast caused nary a ripple. Certainly, we in the U.S. did not know about it. Heaven forbid that CBS’ 60 Minutes or any other network would actually report this or rebroadcast the Australia 60 Minutesreport.

Below is the video, followed by my summary and transcripted excerpts from the first segment.

Reporter: “Without question, the biggest political scandal Britain has ever faced will be exposed tonight. It involves a secret network of the highest office holders in the land — past and current members of Parliament, cabinet ministers, judges, diplomats, even one of the country’s top spies. These men are accused of some of the most sadistic child sexual abuse imaginable, on hundreds of victims, some as young as eight.More confronting still are claims that children were killed in order to protect this network of predators, including one boy whose father worked at the Australian High Commission in London. For over 40 years, the evil child-predators acted with complete impunity, hiding behind the façade of respectability, but no longer.

They were children, often the most vulnerable, placed in the care of the state only to be betrayed, systematically trafficked to the most powerful men in the land. […] Tonight, three victims speak out. Claims of a monumental cover-up that children were murdered, one of them the 15-year-old son of the Australian High Commissioner’s chauffeur. […] A sex scandal at the very highest levels of the British government. Child sexual abuse victims come forward to point the finger at very powerful men — serving members of the British Parliament, cabinet ministers, lords, spies, even senior police, incriminated in a VIP pedophile ring for the privileged and powerful. […] British police are now investigating compelling evidence that dozens of children suffered similar fates.”

Kerr, now 54 years old, whom the reporter describes as “a clearly damaged man,” said his life began to fall apart when at the age of nine, he was sent to the now infamous Kincora Boys’ Home in Northern Ireland, run by men who would later be convicted of the frequent rape of children in their care. He said the sexual abuse started a week after he arrived in the home. Within a few years, Kerr and other boys from the home were being trafficked around the UK as “playthings” and “boy toys” for pedophiles.

When Kerr first came to London, the first place to which he was taken to meet “the men who ruled the country” was Dolphin Square, an upmarket apartment complex just minutes from the Houses of Parliament. Kerr recalls, “I was taken here, I was told to sit down on the bed. They started to take my clothes off.”

Reporter: “Richard was brought here to have sex with politicians and other high ranking members of the British establishment, including members of the House of Lords,” some of whom (“older, very old lords’) are still in politics. “Richard was one of dozens of boys and girls, almost all from state institutions, brought to the homes of the rich and powerful to be forced into sex with adults.”

Baker, now 32, was sexually abused since she was six years old, when a family member took her to pedophiles, who “would basically single out the girls, pick who they wanted, and then [the girls] would be abused.”

Shown their photographs, Baker positively identified two British politicians who were among her abusers in the early 1990s, saying “We don’t forget those faces, no way”:

Darren, not his real name and with his face concealed, was 15 years old in a care home when he met Peter Righton, “a senior adviser to the government of child development and secretly a member of the pedophile information exchange — a group campaigning to lower the age of consent for child sex.” Righton supplied boys like Darren to pedophiles in Dolphin Square.

Note: According to Wikipedia, Peter Righton was a child protection expert, social care worker and a convicted child molester, who died in 2007. In 2013, the Metropolitan Police launched Operation Cayacos to investigate claims that Righton was part of an establishment paedophile network.

Darren and “other witnesses” identified one of the pedophiles as Leon Brittan, a former MP and British Home Secretary, who “raped children.” Son of Lithuanian Jews who migrated to Britain before WWII, Brittan died in January 2015.

The reporter says these pedophile cases are now being “taken seriously” by police and by “a new generation of political leaders,” among whom is Conservative MP (Member of Parliament) Zac Goldsmith, who says “There has to be an element of coverup, conspiracy, call it what you want…. I think there is very compelling evidence that very senior people engaged in terrible acts and are protected by the establishment. I have no doubt at all about that. I think the genie is out of the bottle.”