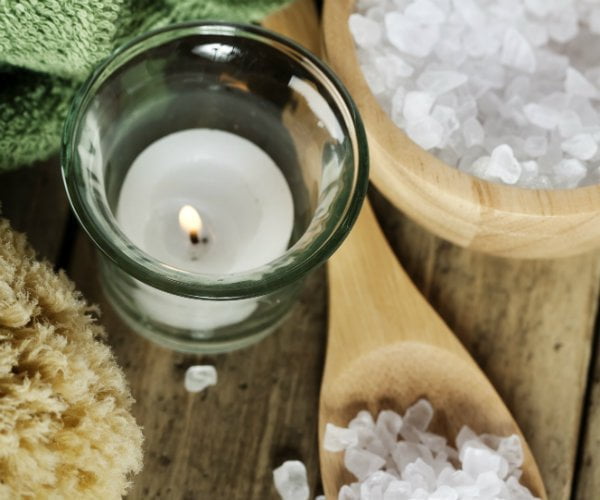 (There is a wonderful Salt Cave (healing room in a building) in Phoenix that I’ve sat for a session once.  It was WONDERFUL.  Walls are salt and pulverized salt is blown in the room.  Too bad I live so far away.  I did bring some of that pulverized salt home and used it.  You can make your own by putting some good quality salt into a blender or food processor – until it’s powdered.  You need to bake it in an oven for about 30 minutes on 350 degrees to dry it out.  I put it in a spice bottle, shake it, quickly crack the lid and breathe it in slowly (you’ll cough at first).  It should powder like Powdered sugar.  There is also a salt pipe that you can order at many different stores.  It looks like a pipe you fill with coarse salt.  It has holes in the bottom of the pipe and you just inhale through the pipe.  I’ve never tried these and didn’t know they were available until I had such good results with the powdered salt.  These are also worth looking into and would be less of a mess.  (just think powdered sugar kind of mess).  Powered salt can be kind of messy when you shake and breathe, FYI, but I would highly recommend this home-made version.  Last year there was only 2 or 3 salt rooms in the U.S. and many more in Europe and Middle East Countries.)

Dr. Mehmet Oz calls salt the “miracle mineral that heals” and notes that, historically, it’s been used for centuries to treat a wide range of ailments.“Even Hippocrates, the father of medicine, himself prescribed salt therapy for breathing ailments,” he says. “Today it’s being used to relieve skin conditions like psoriasis and eczema as well as treat breathing issues due to asthma and cystic fibrosis.

“From the Dead Sea to the salt mines of the Himalayas, salt is being rediscovered for its unique antibacterial and anti-inflammatory properties.”

Salt rooms are springing up across the country. Adherents flock into the salt-coated rooms to soak up what is known as “halotherapy.”

“Halo” is the Greek word for salt and halotherapy advocates say it can treat a variety of ailments, ranging from asthma and allergies to chronic obstructive pulmonary disease (COPD) and sinusitis. It’s also believed to lower stress and strengthen the immune system.

Machines called halogenerators deliver a dry salt aerosol made up of microscopic particles that circulate in the therapy room where you simply sit and relax. Many salt rooms are equipped with soothing spa music or deep breathing audio pods you can access with headphones.

Salt therapy originated in 1843 when a Polish physician named Felix Bochkovski noticed that salt mine workers did not experience the respiratory issues or lung disease of other miners. Almost 100 years later, a German doctor named Karl Herman Spannagel noticed that his patients’ health improved after hiding out in the salt caves to avoid heavy bombing during World War II.

“And many years ago, people with tuberculosis used to moved into giant salt caves in Europe which offered the only cure for their disease,” Dr. Y. Aaron Kaweblum, an expert in allergies and asthma, tells Newsmax Health.

“We all know that when a baby has trouble breathing, we give it saline solution drops to clear the airways. When you have an infection of the mouth, your dentist advises you to rinse with salt water. Salt has been healing us for centuries. I have seen many of my patients with asthma improve dramatically and are able to control their condition with regular visits to a salt room.”

Kaweblum notes that many people with allergies and asthma feel better when they take an ocean side vacation or cruise.

“Due to the osmotic pressure the inhaled salt diminishes the swelling of the bronchial mucosa, dissolves the mucus and makes expectoration easier and faster. It also helps remove air pollution and allergies faster, too. It inhibits the growth of bacteria and, and in some cases, kills them. It has beneficial effect on the well being of the patient and a relaxation effect on the nervous system. According to the international literature, it has beneficial effect for some chronic dermatological disease.”

“When fine salt particles are inhaled, they will fall on the airway linings and draw water into the airway, thinning the mucous and making it easier to breathe, thus making people feel better,” he says. “Also the environments are allergen-free and good for people with allergies affecting their lungs.”

“It’s one of the most fundamental minerals … and a great way to treat even colds and flu without resorting to drugs,” he says.