Prepare For Change
Home Awakening US Lawmakers Seek to Throw Citizens in Prison for Decades if They... 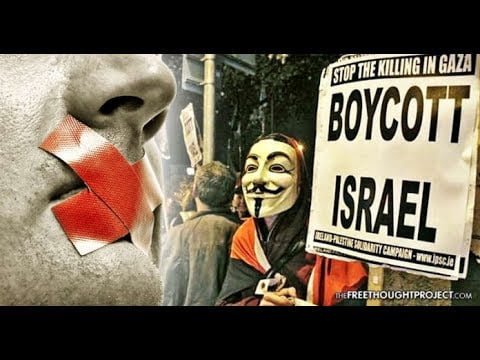 One of the most fundamental rights in a nation logically consistent in crying freedom is the ability to boycott — a company, entity, church, or, in the case of the Boycott, Divest, and Sanction Movement against Israel, an entire nation — in protest of perceived transgressions to force through the wallet reforms which might not otherwise be accomplished.

Boycotts have indeed managed the seemingly impossible — SeaWorld, for example, ultimately had to shutter its orca captivity and breeding programs after the documentary, Blackfish, depicting horrendous, inhumane conditions, jerked heartstrings and ignited a backlash boycott, sending profits to the brink of an abyss.

Now, an alarmingly large group of politicians seek to strip American citizens of the right to this highly-effective method of protest — only when employed against the nation of Israel — with violators facing decades behind bars and stiff financial penalties.

New York Senators Chuck Schumer and Kirsten Gillibrand join 41 other members of Congress championing proposed legislation, which would make literal criminals of any Americans boycotting Israel — a brazen, if not explicit, attack on the BDS Movement, incidentally exploding in popularity worldwide as the belligerent nation continues its occupation of Palestinian lands.

Laying down the irrational, inflammatory gauntlet before the Senate this week, Schumer opined,

“Anti-Zionism, unfortunately, continues to bubble up in many different forms. There is perhaps no greater example than the pernicious effort to delegitimize Israel through boycotts, divestment, and sanctions. The BDS movement is a deeply biased campaign that I would say, in similar words to Mr. Macron, is a ‘reinvented form of anti-Semitism’ because it seeks to impose boycotts on Israel and not on any other nation.”

But critics of BDS should absolutely take heed — it is the First Amendment, not political views on Israel, at the crux of this dangerous legislation.

“Under the terms of the bill, a pair of U.S. laws that prohibit U.S. citizens from supporting a boycott request from a foreign government against an ally of the United States would be updated to specifically prohibit Americans from supporting international boycott efforts against Israel,” reports the Gothamist.

According to the American Civil Liberties Union — which immediately castigated the bill for further shredding the First Amendment — violators “would be subject to a minimum civil penalty of $250,000 and a maximum criminal penalty of $1 million and 20 years in prison.”

Despite clarifying it “takes no position for or against the effort to boycott Israel or any foreign country,”the ACLU implored, “The impacts of the legislation would be antithetical to free speech protections enshrined in the First Amendment and we urged members to oppose the legislation in the absence of significant revisions.”

Worse, “it would punish individuals for no reason other than their political beliefs” — a footnote critics of BDS would do well to heed in determining their own position on the proposed legislation or others similar. To enact law punitive of one’s political adversaries is to invite they do the same — or, more accurately, proves to the State rights can be erased if packaged appropriately.

Ire over Israel’s enactment of what has consistently been deemed by academia and analysis a brutal apartheid — mirroring human rights abuses, atrocities, and blatant injustices of the South African regime responsible for the political detainment of Nelson Mandela — bolsters the numbers of BDS adherents in the U.S. and elsewhere.

“The state of Israel maintains a military occupation of territories that were assigned to Palestinians by international law. Palestinian residents of the occupied West Bank are subjected to the discriminatory rule of a foreign army, while their Israeli neighbors enjoy the full rights of citizenship,” writes Eric Levitz for the Daily Intelligencer.

Make no mistake, this bill came to the fruition as Israel’s appalling persecution of Palestinians on their land has increasingly become the subject of protest by activists and advocates — who turn to the successful BDS campaign as a legitimate, nonviolent means to convey the message.

Pro-Israel fervor in the United States Congress usually bears the hallmarks of AIPAC — the infamous lobbying group — and this bill is no exception.

Indeed, as The Intercept noted, it appears an embarrassing number of the bill’s signatories did so simply for its AIPAC seal-of-approval (making felons of Americans choosing to protest a foreign nation through refusing business serves who, exactly?), rather than taking time to actually read the draft.

However this monstrosity gained congressional popularity, it must be loudly quashed and relegated to the dustbin of rights-crushing, ill-conceived ideas — which is the snuggest-fitting definition of the Anti-Boycott Israel bill.

“[T]he bill would punish businesses and individuals based solely on their point of view,” the outraged ACLU admonished. “Such a penalty is in direct violation of the First Amendment.”

Such a penalty sadly also seems a typical evisceration of freedom in this corrupt and encroaching authoritarian State.