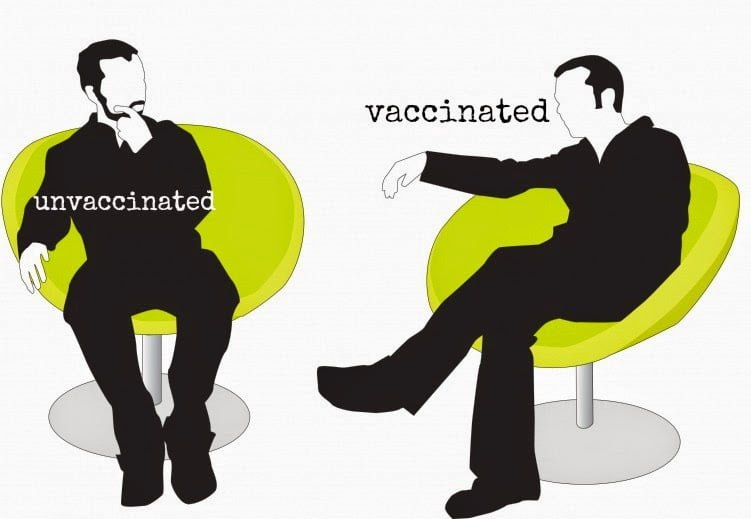 I’ve placed these lies in the context of a Q&A:

A: Well, let’s start here. The theory of vaccination states that the shots cause a person’s immune system to swing into action against a particular germ that is placed in the vaccine. This is a “rehearsal” that prepares the immune system to react when the real disease and the real germ come along later. Got that?

A: But you see, there is one vaccine (Hepatitis B) that is given to a baby the day it is born. The baby has no immune system of its own. In fact, some researchers say a child doesn’t fully develop his own immune system until age 12-14.

A: A vaccine can’t cause the desired “rehearsal” unless the recipient has his own immune system. That’s obvious.

Q: But that would mean the vaccine can’t work during those years when a child doesn’t have his own fully developed immune system.A: Correct.

Q: But then all the experts would be wrong.

Q: What about the elderly? We constantly hear they must get vaccines because they have weak immune systems.

Q: But we have a great deal of information stating that vaccines have wiped out traditional diseases. The success rate has been remarkable.

A: Two points here. As Ivan Illich states in his book, Medical Nemesis: “The combined death rate from scarlet fever, diphtheria, whooping cough and measles among children up to fifteen shows that nearly 90 percent of the total decline in mortality between 1860 and 1965 had occurred before the introduction of antibiotics and widespread immunization. In part, this recession may be attributed to improved housing and to a decrease in the virulence of micro-organisms, but by far the most important factor was a higher host-resistance due to better nutrition.” (Ivan Illich, Medical Nemesis, Bantam Books, 1977)

Q: What’s the other point?

A: When the experts claim vaccines have wiped out traditional diseases, what are they really saying? They’re saying that the visible symptoms of those diseases are seen rarely now, compared with earlier decades. But why have those visible symptoms receded into the background?

A: Consider the basic symptoms of measles. Rashes, fever. Conventionally speaking, are they simply the result of infection by the measles virus? No. The symptoms are a combination of infection AND the body’s immune system reacting to the germ. That reaction—the inflammatory response—is the body’s attempt to throw off the effects of the germ. THAT’S WHY WE SEE THE SYMPTOMS.

A: Vaccines contain toxic elements. Germs, chemicals like aluminum, formaldehyde. If these toxic substances weaken the immune system, then there will NOT be a full inflammatory response. The immune system won’t be capable of mounting that response. Therefore, the visible symptoms of the disease won’t appear, when the real disease comes along. Do you understand?

Q: Yes. The immune system is too weak to fight back.

A: Therefore, after mass vaccination campaigns against measles, it will seem as if measles has been wiped out because, by and large, we don’t see the traditional symptoms anymore. But that’s an illusion. Measles hasn’t really been wiped out. Instead, people are now suffering from a weakened immune system, and symptoms of THAT will be different.

A: Yes it is. Because now you’re talking about chronic illness, not acute measles which burns out quickly in the presence of a fully functioning immune system.

Q: Wait a minute. For a long time, millions of cases of measles have been reported in the Third World, where children’s immune systems are very weak. So the symptoms of measles WERE visible.

A: Yes. Let’s say those children’s immune systems were, at one time, barely strong enough to mount an inflammatory response. That’s why the rashes and fever appeared. But then, after vaccination with toxic elements, that wasn’t the case anymore. All those children were now “below the line.” When the measles came along, you could no longer see the symptoms. After vaccination, their immune systems were too weak to mount the inflammatory response. This isn’t “we wiped out measles.” This is “we replaced measles with chronic disease.”

Q: You seem to be saying we need to make people’s immune systems stronger. That’s the real answer. Then children will get the real diseases and overcome them—and then they’ll be immune for life.

Q: What medical “fix” will do that?

A: There isn’t any. Making a person’s immune system stronger is a non-medical situation. It involves better nutrition, better local sanitation, and other factors, none of which have to do with medical treatment.

Q: You’re also saying that a weak immune system opens the door to all sorts of disease conditions.

A: Correct. Vaccination can’t cure a weak immune system. The solution has to be non-medical.

Q: I don’t imagine medical experts like that idea.

A: That would be a vast, vast understatement.

Q: But there must be a medical solution to weak immune systems.

Q: Because if there isn’t, everything we’ve been taught is wrong.

A: And you can’t accept that?

Q: If I did accept that, it would mean the medical system has a large stake in keeping people’s immune systems weak.

A: And miles of propaganda tell you that couldn’t be true.

A: Whose problem is that?

Q: I don’t want to think about this. I’d rather bury my head in the sand. Let me shift the conversation to something you wrote about—the flu vaccine. This troubles me, too. You quoted author Peter Doshi, who published an article in the BMJ Journal. Can I quote you?

“As Doshi states, every year, hundreds of thousands of respiratory samples are taken from flu patients in the US and tested in labs. Here is the kicker: only a small percentage of these samples show the presence of a flu virus.”

“This means: most of the people in America who are diagnosed by doctors with the flu have no flu virus in their bodies.”

“Therefore, even if you assume the flu vaccine is useful and safe, it couldn’t possibly prevent all those ‘flu cases’ that aren’t flu cases.”

“The vaccine isn’t designed to prevent fake flu, unless pigs can fly.”

“’…even the ideal influenza vaccine, matched perfectly to circulating strains of wild influenza and capable of stopping all influenza viruses, can only deal with a small part of the ‘flu’ problem because most ‘flu’ appears to have nothing to do with influenza. Every year, hundreds of thousands of respiratory specimens are tested across the US. Of those tested, on average 16% are found to be influenza positive’.”

“Because most diagnosed cases of the flu aren’t the flu.”

“So even if you’re a true believer in mainstream vaccine theory, you’re on the short end of the stick here. They’re conning your socks off.”

A: You have a question about this?

A: It’s supposed to be shocking. Facts sometimes are.

Q: But how could this escape mainstream journalism? Why wasn’t this a gigantic story in the press? Why hasn’t the government investigated?

A: Why don’t you answer your own question?

Q: Because I’m afraid my answer would shock me.

A: And whose problem is that?

The author of three explosive collections, THE MATRIX REVEALED, EXIT FROM THE MATRIX, and POWER OUTSIDE THE MATRIX, Jon was a candidate for a US Congressional seat in the 29th District of California. He maintains a consulting practice for private clients, the purpose of which is the expansion of personal creative power. Nominated for a Pulitzer Prize, he has worked as an investigative reporter for 30 years, writing articles on politics, medicine, and health for CBS Healthwatch, LA Weekly, Spin Magazine, Stern, and other newspapers and magazines in the US and Europe. Jon has delivered lectures and seminars on global politics, health, logic, and creative power to audiences around the world. You can sign up for his free emails at NoMoreFakeNews.com.