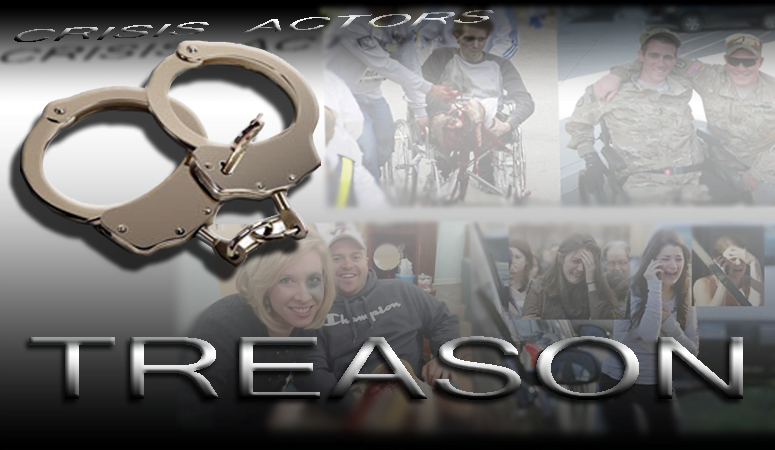 Crisis Actors for Hire: Ready to Create Another False Flag and Treason!
Thanks to one of my emailers, Kristie Oaks, who made me aware that a new batch of “phony Americans” are willing to prostitute themselves out as ‘crisis actors’ for an impending ersatz crisis. Nothing is more repulsive to me than a man, woman or child who is willing to sell his/her integrity for a few shekels to betray this country in an absurd event: the false flag .

“Sandy Hook”, a complete fiasco of reality, underscored the degree to which local/ state police and Connecticut officials are willing to “whore themselves” for a few million dollars. The Newtown School had already been closed for asbestos contamination prior to the event. Yet, the idiot denizens of this Connecticut town/state were willing to partake in an Obama/Holder act of treason akin to shouting ‘fire’ in a movie theater [for which one would be arrested ASAP!].

Not one of the crisis actors was arrested. Lets consider that the governor, the bureaucrats, and the local citizens conspired in one of the most pathetic scenarios of a non-existent autistic boy not-committing an act of terror/massive child-killing.  #Fake News played up the volume of this farce but journalists who dared to question or declared the event false were demonetized, sued, fired or all of the above. Sounds like East Berlin? Communist Russia?….you betcha, same tactics.

If anyone wants to know how Hitler or Stalin rose to power, watch the Jewish crisis actors happily partake in this farce of death and dying with outright righteous indignation. Next… ask why American Jews lament that there is rising anti-Semitism as another false flag accompanied by another cadre act-out another non-massive death scene in Las Vegas.

Anyone who saw the movie “Bugsy” would realize that most of the gambling institutions in Las Vegas were owned and run by the Jewish/Italian Mafia [Meyer Lanksy, Kleiman, Luciano, et.al.]. What most people did not know is that Italians were not welcomed in Las Vegas so the Jews – the boorish Shelly Adelson as well as Steve Wynn hooked up with the sanctimonious Mormons. Mormons purvey all that they were forbidden to partake: alcohol, sex, gambling, smoking, drinking Coca Cola. Today there is no Joseph Smith prohibition against running these dens of iniquity.

Let’s review the advertisement for a new group of crisis actors scheduled for an ‘impending disaster’ of 10/31/17- 11/2/17 in Oklahoma City. There is also a ‘suspicious craiglist’ soliciting crisis actors for an antifa rally on 11/3-5/17 in Orangeburg, N.C. area. In this particular scenario, the National Guard Reserve Unit will ‘make the decontamination process’ as ‘realistic as possible’.

The ad reads as follows: “…all crisis actors have to be vetted to gain entry within the Orangeburg military base.”

American taxpayers are wasting countless millions of dollars for a group of fools who plan a nonsensical mass shooting in order to choose any one of these unrealistic outcomes:

There is an underlying asinine assumption that false flags are legitimate exercises of the USG which have no need for prosecution. Why has no one yet sued the federal USG for creating ‘scenarios of terror’ as well as committing felonies which threaten the integrity and safety of our republic?

It is about time that truthers start to sue the feds, congress, and state/local officials for a panoply of felonious activities. In a dysfunctional world where American politicians have initiated wars which last for sixteen years [Afghanistan]; it’s time that the Republic awaken from its stupor and finish the farce entitled ‘Federal /State Govt’.

America must retain this one truth: the individual is always superior to the collective in the USG. We must fight until that point will be made clear. Perhaps, like our founding fathers who endured real violence and real bullets; citizens must fight the stupidity /arrogance of our political elite. No one is above the law.

Let us not forget the New Hampshire motto;