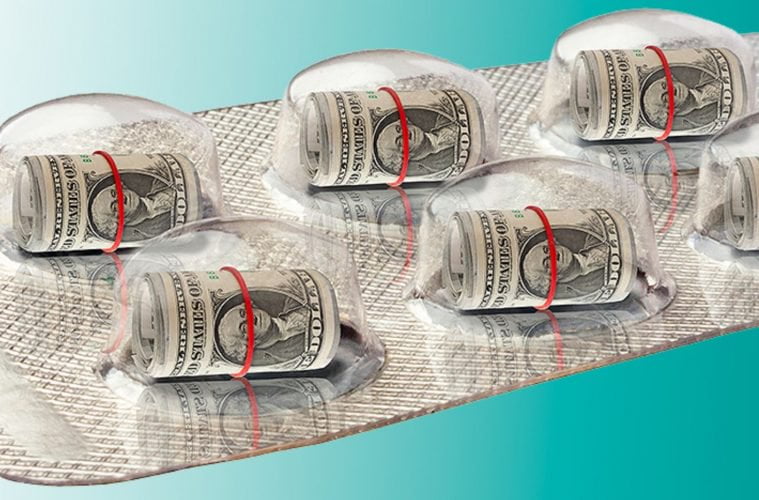 Two days ago, on October 17, over 100 U.S. veterans and relatives of American soldiers who were either injured or killed during the Iraq war filed a federal lawsuit against numerous U.S. and European Big Pharma companies. These aren’t just tiny corporations, they’re some of the leading companies in the medical industry, including Johnson & Johnson and Pfizer.

Those involved in the lawsuit are claiming that these companies regularly paid officials in Iraq’s Ministry of Health, who then used the money to fund the militia that was responsible for many attacks against U.S. troops.

So, why are Big Pharma companies funding Iraq’s Ministry of Health, and more importantly, did they know the money would end up in the hands of terrorists?

It seems sort of strange that Big Pharma companies, especially those based in the U.S., would fund the very terrorist organizations that were attacking U.S. troops in the first place. But then again, it’s also sort of strange that the U.S. government funds and trains terrorist groups such as Al Qaeda and ISIS, so perhaps this shouldn’t come as such a surprise.

The lawsuit was filed against five major pharmaceutical giants: AstraZeneca, General Electric, Johnson & Johnson, Pfizer, and Roche Holding. The lawsuit claims that these organizations financed terrorist organizations that are responsible for the deaths of hundreds of American soldiers, and numerous soldiers and veterans who were wounded in the Iraq war.

These companies allegedly paid kickbacks to higher-ups at Iraq’s Health Ministry, and these payments were made when the ministry was controlled by the Jaysh al-Mahdi, or Mahdi Army, an “anti-American” Iraqi militia backed by Iran. The lawsuit includes a 27-page list that details all of the reported deaths and injuries of American troops that were caused by Jaysh al-Mahdi from 2005 to 2009.

In terms of how much the officials at the ministry were being paid, these companies allegedly bribed them with as much as 20% of a total contract’s value. The plaintiffs stated that these corporations funded the ministry employees by supplying them with additional drugs and equipment.

They noted that these free items were packaged in “a manner conducive to street resale” so that the ministry officials could resell them on the black market. In addition, the companies allegedly designed a “slush fund” from 2004 to 2013 in order to fund “after-sales support and other services,” but in reality, the money was apparently used for the Health Ministry officials.

The lawsuit argues that by funding the officials, the corporations “aided and abetted Jaysh al-Mahdi’s terrorist operations against Americans in Iraq.”

[The ministry] functioned more as a terrorist apparatus than a health organization. . . .

Public hospitals were converted into terrorist bases where Sunnis were abducted, tortured, and murdered. [Health Ministry] ambulances transported Jaysh al-Mahdi death squads around Baghdad. Armed terrorists openly patrolled the halls of [Health Ministry] headquarters in downtown Baghdad, which became too dangerous for Americans to enter and which one percipient witness described as a ‘Mahdi Army camp.

The lawsuit claims that the ministry was essentially a front for Jaysh al-Mahdi, which many U.S. army officials started referring to as “the pill army,” because the troops were compensated in pills instead of actual money.

As per whether or not the Big Pharma companies actually knew that this money and medical supplies were ending up in the hands of terrorists, the lawsuit claims they were well aware that the ministry was acting as a front for a terrorist organization. The lawsuit even includes examples of how these companies had previously paid generous amounts of money in the past to settle similar claims.

These examples include one in 2011, whereby Johnson & Johnson paid $70 million to settle charges that its subsidiaries paid kickbacks in order to successfully gain contracts in Iraq and other countries. GE also had a similar case in which it ended up settling for $23 million in 2010.

Two GE subsidiaries allegedly scored at least four contracts between 2000 and 2003 by paying illegal kickbacks to the Kimadia, the Health Ministry’s purchasing agency. AstraZeneca AB, the company’s UK-affiliate, paid at least $162,000 in kickbacks in order to secure the sale of $1.7 million worth of drugs under the sanctions relief program.

Ryan Sparacino, one of the plaintiffs’ attorneys, told the Financial Times: “Most of the defendants have a documented history of paying bribes that supported terrorism under Saddam.

The lawsuit alleges that the companies are in violation of the U.S. anti-terrorism act.

When you really think about it, this information isn’t all that surprising. We live in a world where most businesses’ primary goal is to make money, and ultimately Big Pharma’s primary motive in many of these cases is to score profitable contracts.

There’s also a bit of irony within this case, as it’s helping to expose the ties between large corporations and terrorist organizations that are allegedly in violation of U.S. law, when in reality the U.S. government itself has been funding, training, and aiding terrorist organizations for decades. We’ve have written numerous articles on this subject, such as here, here, here, and here.

In my opinion, the most important thing to remember when reading information like this is that by educating one another, we can make positive change. Although many find it difficult to discuss corruption and other “darker” subject matter, it’s important that we shed light on them in order to increase awareness.