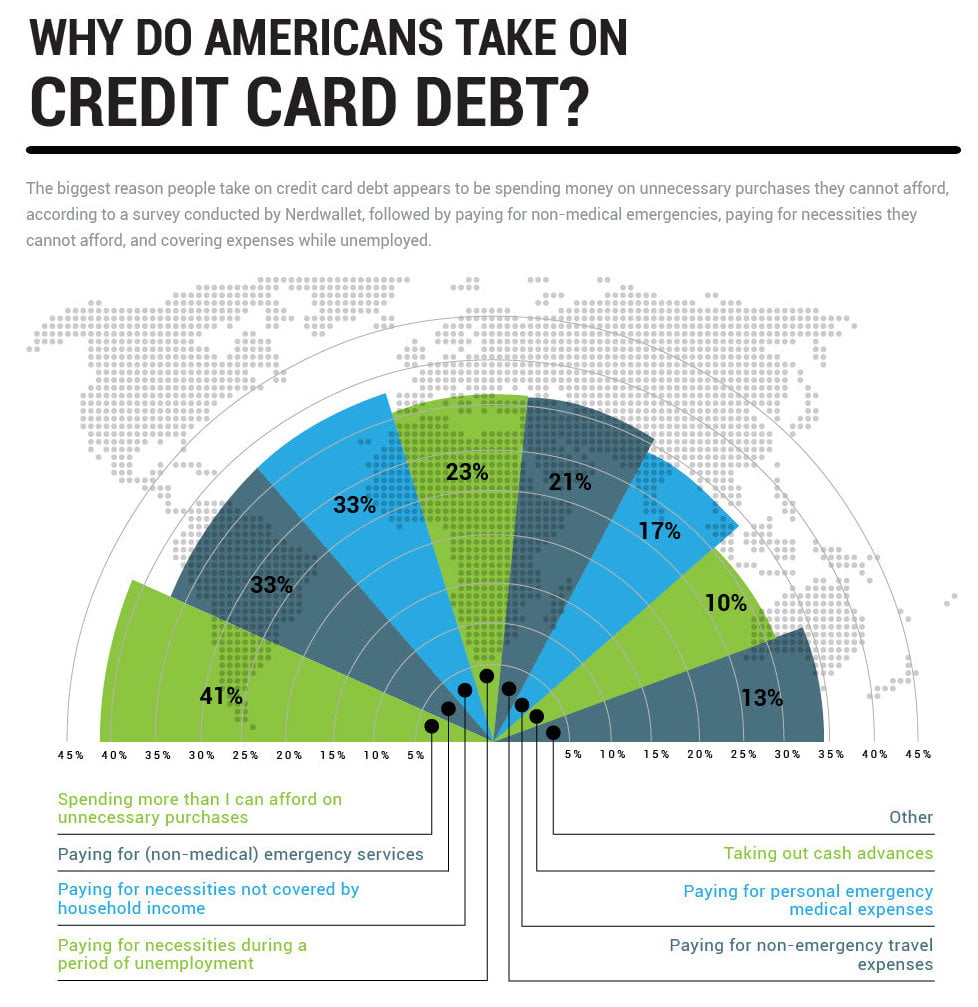 How Much Credit Card Debt Do Americans Have?

While total credit card debt experienced a downward turn in the first quarter of 2018 (down $20 billion from the end of 2017), the upward swing in total accrued credit card debt appears to be unaffected. Expect a continuation of this trend throughout the rest of 2018 and beyond, as credit card use becomes more widespread.

Average Household Credit Card Debt vs. Other Kinds of Debt

While interest rates tend to be higher for credit cards than for mortgages, auto loans or student loans, credit card debt is unsecured and flexible, with most Americans using cards for everyday purchases rather than large, lifelong investments such as cars and homes.

Why Do Americans Take on Credit Card Debt?

For the most part, Americans take on credit card debt in order to spend more than they can afford on unnecessary purchases – according to a survey conducted by Nerdwallet, almost half of all credit card spending happens when consumers attempt to spend above their means.

However, when Americans aren’t spending unnecessarily, most credit card debt is accrued to pay for non-medical emergency services, or necessities they cannot afford with their household income. Unemployment, travel expenses, and personal medical emergencies are also major credit card expenses for most Americans.

Only a very small percentage use credit cards for cash advances.

What does this mean for Americans? Apart from the telling percentage of people overspending on unnecessary purchases, the rest of these debt factors are important, necessary parts of American life.

The growing cost of living in America, as well as skyrocketing health care costs, have seemingly contributed heavily to the accumulation of unsecured credit card debt in the American populace.

While income is growing in America, it has failed to outpace the growth of costs in medical expenses, food, housing and other major expenditures, leading to greater credit card debt growth in those areas.

Americans older than 65 tend to see their credit card debt decrease with age, with Americans 75 and over having less than $6,000 on average – the same as credit card holders under the age of 35.

There are a number of reasons for this parabolic treatment of credit card debt. Credit card holders younger than 35 tend to have much younger credit, with lower scores and lesser ability to spend.

As people enter their thirties, they’re more likely to begin performing the kinds of events that lead to larger accumulations of debt, such as weddings and buying homes, etc. This coincides with a similar increase in credit card debt. This debt stays with them throughout their adult lives as they work to pay it off.

Once Americans enter retirement age, however, they tend to have worked off a larger proportion of their debt and live within more modest means. This leads to the lower average debt rates among older people.

While it may seem counterintuitive to have more credit card debt if you make more money, these statistics still indicate a healthy debt-to-income ratio for Americans in higher income brackets. Creditors are more likely to grant higher credit limits to people with larger incomes, which means they are better able to build up larger credit balances without lowering their FICO scores.

Conversely, the lower the income of the average American, the lower their credit score is; consequently, they have less credit to work with. While $11,000 may be a small amount of a wealthy American’s overall credit, $3,000 may be a much higher percentage of a low-income American’s credit limit and may be more difficult to pay off.

How Do People Feel About Paying Off Credit Card Balances Each Month?

When asked whether or not they agreed that they paid off their credit card balance each month, a majority of Americans — about 66% — either agreed completely or somewhat agreed. Just 12.5% disagreed.

This is fortunate news, given the overarching sentiment among credit card experts that the best way to utilize your credit is to pay off your balances each month. While some believe that you need to build credit by keeping a balance on your cards from month to month, this is just a myth; paying your credit card bill on time is the most effective means by which to build credit.

Generally speaking, it is not recommended to carry a balance on your credit cards, given the high interest rates such cards typically hold. If credit card holders keep a balance on their cards without paying them off, the ensuing interest can far outweigh and perceived increase in their credit rating they may experience.

For people with credit card debt who cannot afford to pay their balance each month, it is recommended to get a balance transfer card, one with a 0% APR introductory period – this will allow them time to pay off their balances without accruing interest.