Prepare For Change
Home ARCONTES Destroying a Country’s Standard of Living: What Libya Had Achieved, What has... 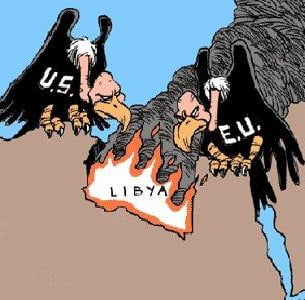 This article was originally published by GR in September 2011,  following the devastation triggered by seven months of intensive NATO bombings.

Today, Libya as a country and a nation state has been destroyed. Under Nuremberg, the leaders of the NATO member states involved in the war on Libya are war criminals.

“There is no tomorrow” under a NATO sponsored Al Qaeda rebellion.

While a  “pro-democracy” rebel government has been instated, the country has been destroyed.

Against the backdrop of war propaganda, Libya’s economic and social achievements over the last thirty years, have been brutally reversed:

The [Libyan Arab Jamahiriya] has had a high standard of living and a robust per capita daily caloric intake of 3144. The country has made strides in public health and, since 1980, child mortality rates have dropped from 70 per thousand live births to 19 in 2009. Life expectancy has risen from 61 to 74 years of age during the same span of years. (FAO, Rome, Libya, Country Profile,)

According to sectors of the “Progressive Left” which endorsed NATO’s R2P mandate:

“The mood across Libya, particularly in Tripoli, is absolutely —like there’s just a feeling of euphoria everywhere. People are incredibly excited about starting afresh. There’s a real sense of rebirth, a feeling that their lives are starting anew. (DemocracyNow.org, September 14, 2011 emphasis added)


The rebels are casually presented as “liberators”. The central role of Al Qaeda affilated terrorists within rebel ranks is not mentioned.

“Starting afresh” in the wake of destruction? Fear and Social Despair, Countless Deaths and Atrocities, amply documented by the independent media.

No euphoria…. A historical reversal in the country’s economic and social development has occurred. The achievements have been erased.

The NATO invasion and occupation marks the ruinous “rebirth” of Libya’s standard of living  That is the forbidden and unspoken truth:  an entire Nation has been destabilized and destroyed, its people driven into abysmal poverty.

The objective of the NATO bombings from the outset was to destroy the country’s standard of living, its health infrastructure, its schools and hospitals, its water distribution system.

And then “rebuild” with the help of donors and creditors under the helm of the IMF and the World Bank.

The diktats of the “free market” are a precondition for the instatement of  a Western style “democratic dictatorship “.

An entire nation has been bombed with the most advanced ordnance, including uranium coated ammunition.

Meanwhile investors and donors have positioned themselves. “War is Good for Business’. NATO, the Pentagon and the Washington based international financial institutions (IFIs) operate in close coordination. What has been destroyed by NATO will be rebuilt, financed by Libya’s external creditors under the helm of the “Washington Consensus”:

“Specifically, the [World] Bank has been asked to examine the need for repair and restoration of services in the water, energy and transport sectors [bombed by NATO] and, in cooperation with the International Monetary Fund, to support budget preparation [austerity measures] and help the banking sector back on to its feet [The Libyan Central bank was one of the first government buildings to be bombed]. Employment generation for young Libyans has been added as an urgent need facing the country.” (World Bank to Help Libya Rebuild and Deliver Essential Services to Citizens emphasis added)

Whatever one’s views regarding Moamar Gadaffi, the post-colonial Libyan government played a key role in eliminating poverty and developing the country’s health and educational infrastructure. According to Italian Journalist Yvonne de Vito,

These developments are in sharp contrast to what most Third World countries were able to “achieve” under Western style “democracy” and “governance” in the context of a standard IMF-World Bank Structural Adjustment program (SAP).

Public Health Care in Libya prior to NATO’s “Humanitarian Intervention” was the best in Africa.

“Health care is [was] available to all citizens free of charge by the public sector. The country boasts the highest literacy and educational enrolment rates in North Africa. The Government is [was] substantially increasing the development budget for health services…. (WHO Libya Country Brief )

Confirmed by the Food and Agriculture Organization (FAO), undernourishment was less than 5 %, with a daily per capita calorie intake of 3144 calories. (FAO caloric intake figures indicate availability rather than consumption).

The Libyan Arab Jamahiriya provided to its citizens what is denied to many Americans: Free public health care, free education, as confirmed by WHO and UNESCO data.

According to the World Health Organization (WHO): Life expectancy at birth was 72.3 years (2009), among the highest in the developing World.

Based on more recent date, which confirms a marked increase in school enrolment, the Gross Enrolment Ratio (GER) in secondary schools was of the order of 108% in 2002. The GER is the number of pupils enrolled in a given level of education regardless of age expressed as a percentage of the population in the theoretical age group for that level of education.

For tertiary enrolment (postsecondary, college and university), the Gross Enrolment Ratio (GER) was of the order of 54% in 2002 (52 for males, 57 for females).
(For further details see http://stats.uis.unesco.org/unesco/TableViewer/document.aspx?ReportId=121&IF_Language=eng&BR_Country=4340&BR_Region=40525

With regard to Women’s Rights, World Bank data point to significant achievements.

In most developing countries, essential food prices have skyrocketed, as a result of market deregulation, the lifting of price controls and the eliminaiton of subsidies, under “free market” advice from the World Bank and the IMF.

In recent years, essential food and fuel prices have spiralled as a result of speculative trade on the major commodity exchanges.

Libya was one of the few countries in the developing World which maintained a system of price controls over essential food staples.

World Bank President Robert Zoellick acknowledged in an April 2011 statement that the price of essential food staples had increased by 36 percent in the course of the last year. (See Robert Zoellick, World Bank)

The Libyan Arab Jamahiriya had established a system of price controls over essential food staples, which was maintained until the onset of the NATO led war.

While rising food prices in neighbouring Tunisia and Egypt spearheaded social unrest and political dissent, the system of food subsidies in Libya was maintained.

These are the facts confirmed by several UN specialised agencies.

“Missile Diplomacy” and “The Free Market”

War and Globalization are intiricately related.  The IMF and NATO work in tandem, in liason with the Washington think tanks.

The NATO operation purports to enforce the neoliberal economic agenda. Countries which are reluctant to accept the sugar coated bullets of IMF “economic medicine” will eventually be the object of a R2P NATO humanitarian operation.

Déjà Vu? Under the British Empire, “gun boat diplomacy” was a means to imposing “free trade”. On October 5, 1850, England’s Envoy to the Kingdom of Siam, Sir James Brooke recommended to Her Majesty’s government that:

“should these just demands [to impose free trade] be refused, a force should be present, immediately to enforce them by the rapid destruction of the defenses of the [Chaopaya] river… Siam may be taught the lesson which it has long been tempting– its Government may be remodelled, A better disposed king placed on the throne and an influence acquired in the country which will make it of immense commercial importance to England”(The Mission of Sir James Brooke, quoted in M.L. Manich Jumsai, King Mongkut and Sir John Bowring, Chalermit, Bangkok, 1970, p. 23)

Today we call it “Regime Change” and “Missile Diplomacy” which invariably takes the shape of a UN sponsored “No Fly Zone”. Its objective is to impose the IMF’s deadly “economic medicine” of austerity measures and privatization.

The World Bank financed “reconstruction” programs of war torn countries are coordinated with US-NATO military planning. They are invariably formulated prior to onslaught of the military campaign…

Libya`s frozen overseas financial assets are estimated to be of the order of $150 billion, with NATO countries holding more than $100 billion.

Prior to the war, Libya had no debts. In fact quite the opposite. It was a creditor nation investing in neighboring African countries.

The R2P military intervention is intended to spearhead the Libyan Arab Jamahiriya into the straightjacket of an indebted developing country, under the surveillance of the Washington based Bretton Woods institutions.

In a bitter irony, after having stolen Libya’s oil wealth and confiscated its overseas financial assets, the “donor community” has pledged to lend the (stolen) money back to finance Libya’s post-war “reconstruction”.   Libya is slated to join the ranks of indebted African countries which have driven into poverty by IMF and the World Bank since the onsalught of the debt crisis in the early 1980s:

The IMF promised a further $35-billion in funding [loans] to countries affected by Arab Spring uprisings and formally recognized Libya’s ruling interim council as a legitimate power, opening up access to a myriad of international lenders as the country [Libya] looks to rebuild after a six-month war.  …

Getting IMF recognition is significant for Libya’s interim leaders as it means international development banks and donors such as the World Bank can now offer financing.

The Marseille talks came a few days after world leaders agreed in Paris to free up billions of dollars in frozen assets [stolen money] to help [through loans] Libya’s interim rulers restore vital services and rebuild after a conflict that ended a 42-year dictatorship.

The financing deal by the Group of Seven major economies plus Russia is aimed at supporting reform efforts [IMF sponsored structural adjustment] in the wake of uprisings in North Africa and the Middle East.

The financing is mostly in the form of loans, rather than outright grants, and is provided half by G8 and Arab countries and half by various lenders and development banks. (Financial Post, September 10, 2011, 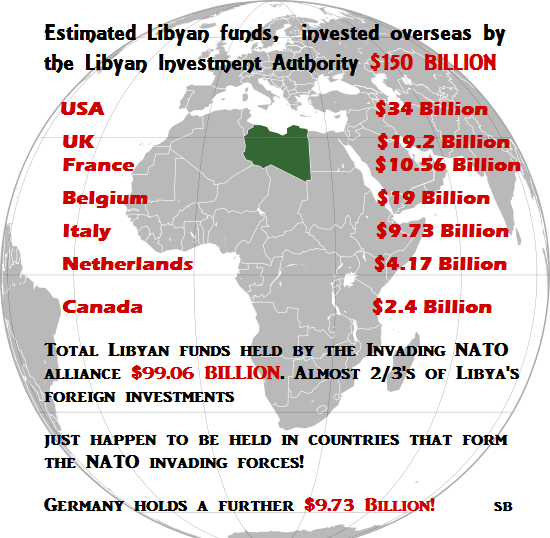 Michel Chossudovsky is an award-winning author, Professor of Economics (Emeritus) at the University of Ottawa. He is the Founder and Director of the Centre for Research on Globalization (CRG), Montreal and Editor of the globalresearch.ca website. He is the author of The Globalization of Poverty and The New World Order (2003) and America’s “War on Terrorism” (2005). He is also a contributor to the Encyclopaedia Britannica. His writings have been published in more than twenty languages.