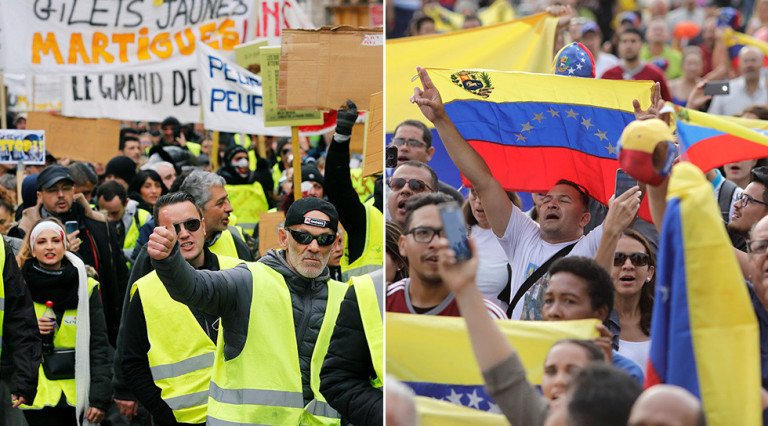 Large street protests in both France and Venezuela. Two Presidents with low approval ratings. But only one whose legitimacy has been denied by Western ‘democracies’ and by the French president himself.

Just when you thought globalist hypocrisy couldn’t get any worse, it just did.

France and Venezuela have both experienced widespread anti-government protests in recent weeks. These have been fuelled by economic factors and increased financial hardship of the majority.

But it’s only in Venezuela where the democratically-elected leader, Nicolas Maduro, has been ordered to step down and his opponent, Juan Guaido, has been anointed president. The ‘good old democracies’ of the US and the EU have been falling over themselves to ‘recognise’ Guaido. They’re simply Mad About the Boy, and mad at Maduro.

In France though, it’s a very different story. Here it’s been the street protestors – les gilets jaunes – who have been besmirched. They’re ‘populists’ (boo, hiss) and there have been claims that the whole thing is being stirred up by Russia (an even louder boo, hiss). 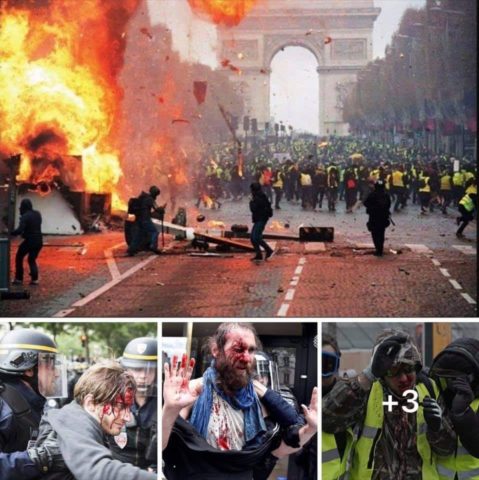 Venezuelan people have legitimate grounds for taking to the streets to protest against their president in times of hardship, but the French people do not. No siree!

To add insult to rubber bullet injury, Emmanuel Macron, the man who has triggered the biggest protests in France for over half a century, has the gall (no pun intended) to be right at the forefront of those supportingan unelected leader in Venezuela, and all in the name of ‘democracy.’

Gilbert and Sullivan could not have created a more topsy-turvy world. One in which those who bray the loudest about democracy and ‘human rights,’ are the greatest destroyers of democracy and human rights. Where the most resolute defenders of  ‘law and order ‘ in one country are the most vocal advocates of anarchy and setting fire to government buildings in another. Repeat after me: Street protests in Venezuela good, street protests in France bad! Very bad!

When it comes to their own populaces, Macron and Maduro seem to be just about equally unpopular if we believe the polls.

Macron’s rating fell as low as 18% in early December, but has surpassed 30% since then. Some 73 percent think he’s an authoritarian.

In Venezuela in November 63% of people said they supported a ‘negotiated settlement’ to remove Maduro from office.

We can say that it’s probably true that most people in France and Venezuela want their present leaders out.

But the reason why there’s international pressure on Maduro but not on Macron to step down is not because of the extent of the economic hardship, the scale of ‘human rights abuses’ or the numbers out on the streets, but because one furthers the interests of what Greek political philosopher and economist Takis Fotopoulos has called the ‘Transnational Elite,’ while the other one doesn’t.

Macron is an ex-banker whose mission to is to ‘reform’ the French economy on neoliberal lines. On foreign policy he supports ‘liberal interventionism’ and French troops staying (illegally) in Syria. France is a member of NATO and, since the end of Gaullism, a staunch ally of the US.

Maduro by contrast is a former bus driver whose country operates a largely socialistic economy. Its foreign policy is strongly anti-imperialist. Venezuela is an ally of Russia, and not the US. It opposed ‘regime change’ in Syria.

You don’t have to be Albert Einstein to work out why the Transnational economic/political/propaganda/academic and cultural elites, to use Fotopoulos’s classification in his book ‘The New World Order in Action,’ are gunning for Maduro but not for Macron.

Macron may be despised by millions of his fellow countrymen but he is not despised (far from it!) by the people who wield the greatest power in the West today. Maduro is. To get their hands on France’s assets, the transnational elite need Macron to stay. To acquire Venezuela’s assets, and in particular its oil, they need Maduro to go.

That could explain why much of the media coverage of the Venezuelan protests has been sympathetic, even if appalling acts of violence are carried out by anti-government protesters, such as the burning to death of a black man in Caracas in 2017 while the coverage of protests in France has been begrudging.

Earlier this week in Britain, we witnessed the grotesque spectacle of an anti-war Labour MP, Chris Williamson, who opposes Western interference in Venezuela, being harangued by Channel 4 News presenter Jon Snow for not ‘changing sides’ and supporting the recognition of an opposition leader as the country’s lawful president.

Can you imagine someone being attacked in such a way for not supporting Jean-Luc Melenchon being declared president of France?

Of course that’s not going to happen.

The ‘transnational elite’ don’t want to see Jean-Luc in power, nor Marine Le Pen for that matter. Macron is the ‘democratically elected’ president and that’s the end of that, no matter how many take to the streets to protest. In Venezuela though, Maduro, despite his election victories, is ripe for plucking.

We have of course been here before. Lots of times.

We can state it as a rule that any leader of a strategically important, resource-rich country who obstructs the hegemonic aspirations of the transnational elite, will be subject to a campaign of demonization and delegitimization, as sure as night follows day.

In 2009, we were told that the presidential election in Iran which resulted in a victory for the ‘hardline’ Mahmoud Ahmadinejad was undoubtedly ‘stolen’. It took an ex-CIA man, Robert Baer, to challenge the dominant narrative. “One of the only reliable, Western polls conducted in the run-up to the vote gave the election to Ahmadinejad — by higher percentages than the 63% he actually received,” he wrote in Time.

If the notion that Nicolas Maduro can no longer be considered the legitimate president of Venezuela because a large number of people oppose him, then, hardly any current leader in the world is ‘legitimate.’

Put simply, if ‘Maduro must go’, then so too, by the same logic, must Macron and indeed Donald Trump, who lest we forget did not win the popular vote in the US presidential election of 2016 and presides over a deeply divided country.

Furthermore, if ‘human rights’ are brought into it, what about the ‘human rights’ of street protesters in France who have subject to quite brutal treatment from authorities? Earlier this year 28-year old Frenchman Hedi Martin was sentenced to six months in jail for calling for a Yellow Vest protest.

Hundreds have been arrested in the state-clamp down on dissent.

But it’s not in Venezuela, so we really shouldn’t be paying too much attention. Remember, the real revolution – one that challenges the transnational elite, instead of aiding their cause – will not be televised. And for sure, Macron won’t be cheering it.

Neil Clark is a journalist, writer, broadcaster and blogger. He has written for many newspapers and magazines in the UK and other countries including The Guardian, Morning Star, Daily and Sunday Express, Mail on Sunday, Daily Mail, Daily Telegraph, New Statesman, The Spectator, The Week, and The American Conservative Follow Neil Clark @NeilClark66