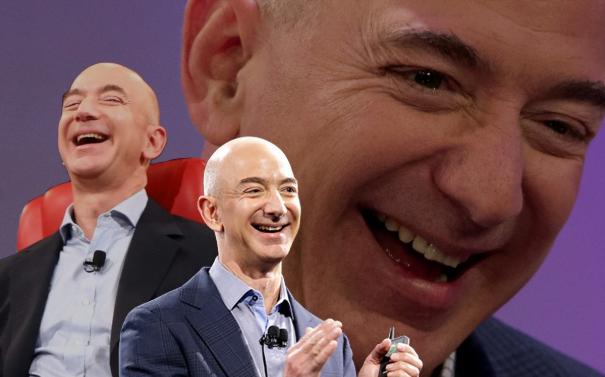 According to an analysis by the Institute for Taxation and Economic Policy (ITEP,) a leading US tax justice group, Amazon got a $129 million tax rebate last year, equivalent to a minus one per cent US federal tax rate, its second year running of negative taxes. (Its effective tax rate there was 3.0 per cent from 2009-18, according to ITEP.)

We haven’t surveyed its tax bills in other countries, but it is known to use tax havens like Luxembourg extensively to cheat on its taxes worldwide. And this follows Amazon’s long-running Hunger Games – style competition to get US localities to offer it biggest subsidy packages to try and persuade it to locate its second headquarters there: a shake-down that New York thankfully rejected recently.

How is Amazon escaping tax? a recent public filing says:

We have tax benefits relating to excess stock-based compensation deductions and accelerated depreciation deductions that are being utilized to reduce our U.S. taxable income [and] . . . As of December 31, 2018, our federal net operating loss carry-forward was approximately $627 million and we had approximately $1.4 billion of federal tax credits potentially available to offset future tax liabilities.”

Well, in short, they can deduct bumper stock benefits for executives from the company’s tax bill, and they have also made past losses (at least on paper,) which they can hold in reserve and deduct against future tax bills. (There are also other tax tricks, such as a ruse to cut its US sales taxes, which its competitors can’t match.)

But this isn’t the end of the story. 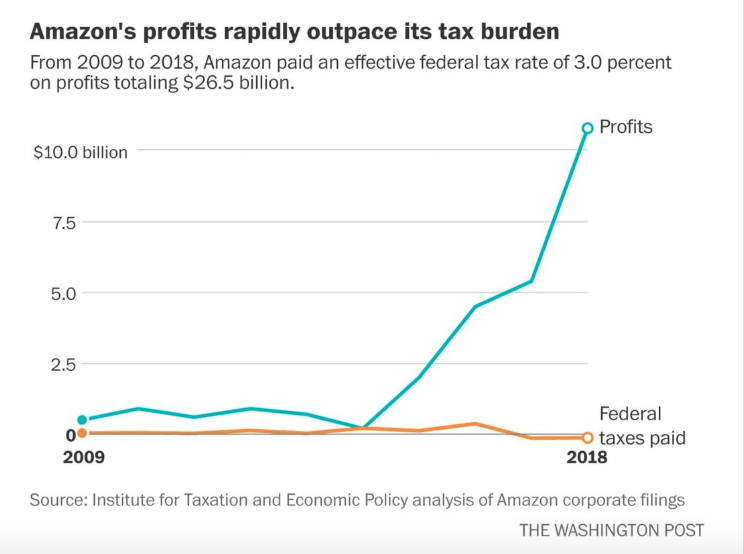 Let’s start with a question. Amazon, at the time of writing, had a market capitalisation of $800 billion, making it the world’s second most valuable company, just behind Apple, at $805 bn. Given this immense wealth, what is it with these “losses” we keep hearing about?

But there’s a more interesting thing going on here too, which is about monopolies and market power. Amazon is, with little question, the world’s biggest monopolist. Crucially, it controls much of the infrastructure on which its competitors sell their products, or use cloud computing services, and this position of power enabling it to kill or hurt its competitors on a factor — market power — that has nothing to do with genuine economic productivity, innovation or entrepreneurship. It’s pure wealth extraction. Many players in the digital economy have to pay a private “Amazon tax” to stay in business.

That last section in italics is pretty much a word-for-word copy of language we often used to describe multinationals’ use of tax havens to cut their tax bills: we have simply replaced “tax cheating” with “market power.”  (We will have more — a lot more — to say about this theme, quite soon: there is enormous overlap between the world of tax justice and that of monopolies and antitrust.)

Now, alongside those other tools for cutting tax bill, Amazon has been deploying another. It could easily use its massive existing market power to force consumers and others to pay higher prices. Yet anyone who has ordered cheap stuff on Amazon will feel that it hasn’t obviously done so. That’s because it has historically preferred to build market share by keeping its prices relatively low. While this strategy of selling cheaply may have reduced its profits – see the first half of the above graph — low profits have had the benefit (to Amazon) of cutting its tax bills.

But the other benefit, hand in hand with the tax benefit, is that its low prices have helped kill — maybe ‘slaughter’ is the right word — its competitors and its suppliers, allowing it to build not just market share, but market power.  (Amazon once had a “Gazelle” unit whose task was to approach and buy up competitors “the way a cheetah would a sickly gazelle,” as Amazon’s boss Jeff Bezos, pictured, described it.) It is hardly a coincidence that nearly all of the richest people in the world are monopolists who have got rich through exerting power in markets.

Analysts have long argued that Amazon’s strategy has been to build market power for a while, then later on, once it had amassed enough to have to start worrying about a democratic response, to start flexing its muscles, and reap the profits. That seems quite compatible with the above graph.

It may be that Amazon’s US tax payments will eventually rise. But perhaps its pursuit of loopholes and lobbying will continue to keep the tax bill down. As the economist Gabriel Zucman points out –

Year after year, their 10-K says: “As we utilize our federal net operating losses and tax credits, we expect cash paid for taxes to significantly increase”… But somehow it never increases.

It’s time now to push for much more radical change in the international tax system.