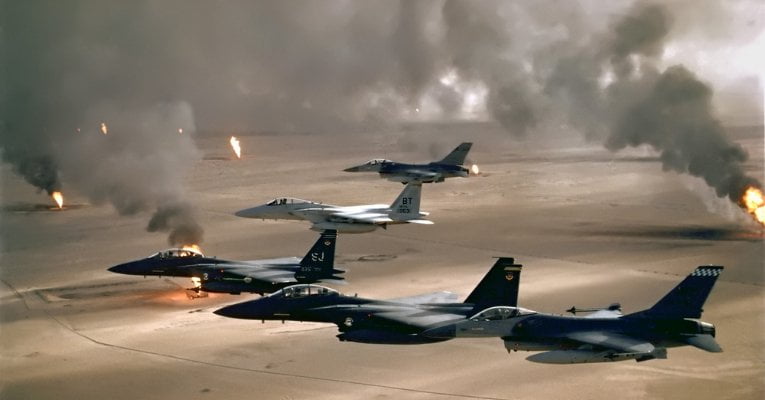 Military spending is growing around the world and in 2017 it increased by 1.1 percent, according to the Stockholm International Peace Research Institute.

U.S. arms expenditures rose by $9.6 billion, driving the global rise and further consolidating the status of the United States as the world’s top spender on the military–by far.

The U.S. spending on war is rooted in post-World War II “new Pentagon capitalism” that eventually became known as the military-industrial complex.

The model, revolutionized by then-Army Chief of Staff and later President Dwight D. Eisenhower, ensured that the United States’ scientific research, technological and industrial capacity would become “organic parts of our military structure” in conditions of national emergency, effectively giving the civilian economy a dual-use purpose. The model eventually gave birth to the sprawling military-civilian economic base, or “military-industrial complex,” that Eisenhower famously criticized in his 1961 farewell address to the nation.

Civilian industry, science, and academia were used alongside an exorbitant and perpetually-expanding war budget to underwrite the Defense Department’s never-ending state of conflict with Cold War enemies, making the world safe for the unchallenged reign of the United States while “pump-priming” the U.S. economy whenever additional surges of “military Keynesian” spending by Washington was required.

The main beneficiary of the model has been the U.S. defense industry. The U.S. is now home to five of the world’s top 10 large military contractors, with U.S.-based companies accounting for 57 percent of total arms sales by the top 100 large defense contractors worldwide, according to SIPRI data analyzed by USA Today.

Companies such as Lockheed Martin, which made $44.9 billion in arms sales in 2017, enjoy revenue from the U.S. government alone that totals more than the combined annual budgets of the Internal Revenue Service (IRS) and Environmental Protection Agency (EPA).

Meanwhile, a number of other companies across the globe have raked in handsome profits from the global trade in arms, many of which are used to commit horrific atrocities and crimes against humanity in such battlegrounds as Yemen.

According to a new analysis of SIPRI data by 24/7 Wall St, the following companies made the most money from governments’ addiction to war-spending and the demand for arms in conflict zones all over the world: