Prepare For Change
Home ARCONTES The Truth Behind “Refrigerated Morgue Truck” Stories — Or How to Manufacture... 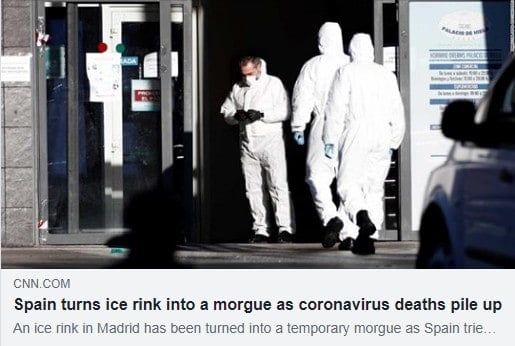 There’s a rather mundane and perfectly understandable explanation

By now, everyone has seen the stories about the “refrigerated morgue trucks” and “ice rink morgues in Madrid.” If you dig down into some of those stories, you will discover a rather mundane, but perfectly understandable explanation for these improvised morgues, namely … bodies that would normally have been picked up by funeral parlors are not being picked up (because many funeral parlors are not operating normally due to the lockdown, or because it is difficult for grieving families to make arrangements given the current level of hysteria), and so these bodies are accumulating at hospitals.

Normally, when someone dies at the hospital, the body is taken to the hospital morgue, and it sits there until the family contacts the funeral parlor and makes arrangements to have it picked up. Typically, this happens fairly quickly, as anyone who has had to make such arrangements will confirm. Hospital morgues have been designed for this routine turnaround. Thus, their storage capacity is limited. When you’re manufacturing mass hysteria, you’ll want to bury these facts deep in your story, so that most readers will miss them.

For example, here are a couple of quotes, buried deep in the stories about the death trucks and ice rink morgues:

“The Madrid municipal funeral service, a major provider in the city, announced in a statement on Monday it would stop collecting the bodies of Covid-19 victims, because its workers don’t have sufficient protective material. The service manages 14 cemeteries, two funeral parlors and two crematoriums in Madrid. The funeral service said that cremations, burials and other services for coronavirus victims would continue as normal, but only if the bodies are ‘sent by other funeral services businesses in a closed coffin.’” — CNN

“We started putting bodies in the morgue truck last week. And it’s been used a lot. A lot. I think there’s around 40 bodies in there now. The funeral homes are having trouble keeping up a bit. So it’s not like ten people died and people go off to the funeral home.” — NEW YORK MAGAZINE

And so ends today’s lesson on Manufacturing Mass Hysteria. Please remember (if you’re an aspiring MSM journalist) to bury such details deep in your sensationalistic stories about ICE RINK MORGUES and DEATH TRUCKS! That way, you can claim to be adhering to journalistic standards, while knowing that most readers will miss these details, or won’t even see them at all, because they will have rushed off to share your story about the MOUNTAINS OF BODIES PILING UP IN THE STREETS!