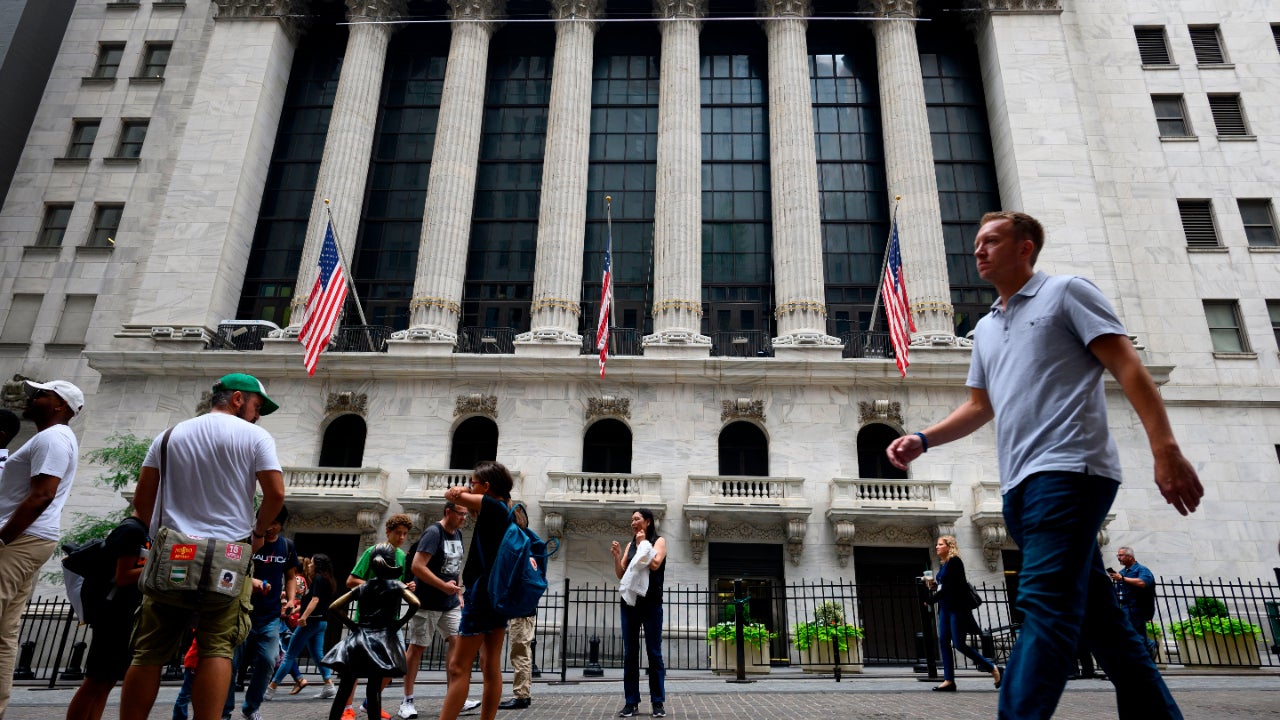 It’s not often that almost every American knows in real-time that an expansion has ended and a recession has begun — but the novel coronavirus is proving to be historic for more reasons than one.

Americans were in the middle of the longest economic expansion on record, a slow-but-steady recovery that took nearly a decade for wage growth and employment to catch back up after the Great Recession. But in a matter of days, confirmed cases of the deadly, contagious pathogen skyrocketed across the globe, forcing states to impose stay-at-home restrictions that have ultimately led to millions of layoffs and shuttered businesses.

More than 10 million Americans filed for unemployment in March, with virtually every industry seeing job loss, according to Department of Labor data. Meanwhile, estimates from Federal Reserve economists predict that joblessness could soar to 32.1 percent — higher than even during the Great Depression.

“This is so unprecedented in its sudden-stop nature,” says Nick Bunker, economic research director at the Indeed Hiring Lab. “It’s directly impacting industries that are not usually the front line of recessions.”

Americans won’t know for sure that they’re living in a recession until the National Bureau of Economic Research’s Business Cycle Dating Committee says so. This private, nonprofit group of economists is the sole arbiter of declaring when a recession starts and ends.

Typically, it takes months, if not a year, for the group to announce that exact timeline. The committee, for example, declared in December 2008 that the Great Recession began in December 2007.

A recession isn’t always characterized by a sudden plunge in business activity. Textbooks typically define the starting point of a downturn as the point when things just aren’t as good as they were.

But even though the economic outlook is looking grim right now, it’s never too soon to ensure that your finances are well-equipped to weather any storm. Here are seven tips to help recession proof your finances, as recommended by experts.

It’s crucial that you pay down any outstanding debt — more specifically, high-cost debt, such as your credit card balance — to create some breathing room in your budget.

As the coronavirus has demonstrated, economic downturns can often lead to job loss. If you’re worried about job security, paying off your obligations might bring you more peace of mind.

Prioritize credit card debt, then turn to other types of loans, such as mortgages or auto loans. Student loans, however, have more favorable provisions, which makes paying them off less of an urgency, says Greg McBride, CFA, Bankrate chief financial analyst.

Even if you’re not worried about losing your job in a downturn, it’s still good financial practice. A March 2019 Bankrate survey found that 13 percent of Americans aren’t saving more because of the amount of debt that they owe.

“Regardless of where we are in a market cycle, prioritize eliminating high-interest rate debt no matter what,” says Lauren Anastasio, CFP, a wealth adviser at SoFi, a personal finance company. “Being in a position where you’ve eliminated those types of high-cost obligations allows you to better prepare for other things financially. The more you’re able to put aside for saving and the less debt you have, it’s going to be available to you in case of an emergency.”

Use Bankrate’s tools to calculate a debt-payoff plan or take advantage of balance-transfer credit cards with zero percent intro APRs. These offers disappeared in 2008, Anastasio says, so they’re likely not going to be around when the next downturn comes.

Job loss can also make it difficult for Americans to pay their day-to-day expenses.

Beefing up your emergency fund — that is, the pool of cash that you reserve specifically for events like downturns — can make it possible for you to still afford your necessities while you search for a new position.

Even if you’re paying down debt, it’s important that you prioritize saving. Focus first on loading up your emergency fund with one month’s worth of living expenses. After that, pay off your debt, and then focus on building up a reserve of three-to-six months worth of funds, Anastasio says.

“Everyone needs to have a cash cushion, even while they’re attempting to pay off high-interest rate debt,” Anastasio says. “It’s imperative because, if an emergency arises and you’re putting every dollar toward eliminating debt, you have no choice but to go back to credit cards to cover the expense.”

A high-yield savings account can help you earn more on the money you stash away. Shop around for the best account that suits your needs and lifestyle.

3. Identify ways to cut back

“Certainly your starting point would be the discretionary items — subscription services or even just spending patterns,” McBride says. “Dinners out or nights out at the bar with friends can seriously add up over time.”

4. Live within your means

Experts typically recommend spending no more than 30 percent of your net income (that is, earnings after taxes) on discretionary items. It’s a good idea to create a monthly budget to ensure that you’re living within your means and not overspending.

“But dining out, vacations, cable — anything that you would potentially consider a luxury or a lifestyle expense — that’s discretionary spending.”

5. Focus on the long haul

After addressing your emergency savings and paying off your debt, your next worry when thinking about a downturn might be about your investments. The thought of the markets plummeting might make you fearful that you’ve lost all of your earnings after years of hard work.

Changing your strategy, however, would be the worst thing you could do, McBride says.

“It will take a tough stomach, because in a recession a stock market will easily fall 30 to 40 percent, peak to trough, but making regular contributions and reinvesting all of the distributions will make those market gyrations work to your benefit,” McBride says. “A recession is a tremendous buying opportunity.”

That goes for all individuals, whether you’re 20 or two years away from retiring, he says. If you’re planning to retire in the next few years, when a recession looks like it could be coming, it might be a good idea to have your first few years of withdrawals already in cash. But don’t shy away from equities in your portfolio. Those are often where you’ll get the most returns that provide inflation protection, he says.

“Do not make changes that jeopardize your long-term financial security based on short-term economic events,” McBride says. “Even for someone who is on the cusp of retirement, retirement is going to last 25 to 30 years. A recession is going to last a year.”

Risk suitability is also another important factor, Anastasio says, a component that’s based on when someone plans on cashing out their investments. If you’re going to change your investing strategy at all, let it be based on this, she says.

“The sooner we expect someone to use the money, that’s where they’re going to need to be more conservative with their options: high-yield savings accounts, CDs,” Anastasio says. “On the other end of the spectrum, when we’re looking to invest for eight to 10 years or longer, that’s when it tends to be more appropriate to be invested in equities or stocks as a whole.”

7. Continue your education and build up skills

But to recession-proof your life, one of the best investments you can make is pursuing an education, says Tara Sinclair, an economics professor at George Washington University and a senior fellow at Indeed’s Hiring Lab. During recessions, the unemployment rate for those with a bachelor’s degree or higher is much lower than for those who have a high school education or less.

“Economists are always emphasizing the importance of education,” Sinclair says. “That’s something, even if you can’t build up a financial buffer, focusing on making sure that you have some training and skills that are broadly going to be employable is really crucial.”

Why predicting recessions is difficult

The novel coronavirus underscores just how difficult it is to predict what will cause that turning point. At the beginning of 2020, a rapidly spreading contagion wasn’t on anyone’s radar.

Even worse, information is often revised, updated and corrected. It’s released with a lag. Even so, developments shift rapidly. Fed officials, for example, pledged to keep interest rates steady through all of 2020. But they ended up slashing rates to near-zero at two emergency meetings, as the coronavirus devastated financial markets and the U.S. economy.

“Some people say economists exist to make weather forecasters look good,” Sinclair says. “The complexity of the macro economy is such that we haven’t yet figured out a clear, causal model of how things work. We can’t predict with any kind of confidence what’s going to happen, particularly when things are changing dramatically.”

Plan for the unexpected when it comes to the economy

Recessions are typically defined as a drop in output or a slowdown in growth. Though most economists would lump the two causes of recessions into supply shocks or demand shocks, each of the past 33 recessions (as tracked by the NBER Business Cycle Dating Committee) have been caused by something a little different, Sinclair says.

“Obviously, if recessions were easily predictable and preventable, we’d expect policymakers to be doing just that,” Sinclair says. “If we think back to 2007, many people asked, ‘How did we not see it coming?’ But that’s the nature of recessions. They are these terrible things that we can’t predict.”

Even so, economies don’t always react to shocks in the same way. Markets panicked after the Fed in December hiked rates for the fourth time in 2018, fearing that too much monetary policy tightening would spur a downturn. The markets, however, bounced back in 2019, flirting with new highs.

If officials make progress containing the virus, investors will likely calm down.

It’s hard to predict the future when you’re using the past as a guide, Sinclair says.

“Our economy is changing so dramatically,” according to Sinclair. “There’s many different sources that can lead to a recession, and it tends to be that when we look out for the next one, we’re looking for the same things that caused the recession rather than recognizing that there’s a new source.”

But you can take solace in the fact that economists are generally much better at knowing whether the U.S. economy is in a recession, Sinclair says. Even though predicting them is close to impossible, you won’t have to wait long before knowing that the U.S. economy is in one. That’s the case with what’s happening right now.

Downturns never come at a good time, but that was even more so with the coronavirus. Many Americans were already living paycheck-to-paycheck, while an October 2019 Bankrate survey found that 2 out of 5 Americans (or 40 percent) aren’t prepared for the next recession.

Regardless of whether the storm is on the horizon, it’s always a good time to make sure your financial portfolio is prepared, Anastasio says.

“I don’t think there’s ever a bad time to evaluate their finances and check in with themselves,” Anastasio says. “If someone personally feels nervous that there’s change on the horizon, it’s always a good time to say, ‘What can I do personally to put myself in a stronger financial position, so I can sleep better at night when the time comes.’”