By AARON BOXERMAN and AGENCIES,

“We submitted a counter-proposal to the Quartet a few days ago,” he said, referring to the group mediating the conflict, made up of the United Nations, United States, Russia and European Union.

Shtayyeh said that the PA’s plan provides for the creation of a “sovereign Palestinian state, independent and demilitarized” with “minor modifications of borders where necessary.”

The Palestinian text foresaw possible land swaps between the two future states on a like-for-like basis, he said at a press conference.

Shtayyeh declined to provide further details about the 4 1/2-page proposal but said the Palestinian position on major issues is well-known.

Announced at the end of January in Washington, US President Donald Trump’s peace plan provides for the annexation by Israel of 30 percent of the West Bank — covering all the settlements and the Jordan Valley — with conditional provisions for a Palestinian state in the rest of the territory, including some areas on the outskirts of East Jerusalem.

The Palestinians have rejected the US plan in its entirety. Prime Minister Benjamin Netanyahu has vowed to annex the 132 settlements, home to some 450,000 Israelis, next month, and the rest of the territory allocated to Israel soon after, subject to American approval.

Shtayyeh said the Palestinians were hoping that Netanyahu would not go ahead with his annexation plan. He called annexation an “existential threat” that would mark the “total erosion of our national aspirations.” 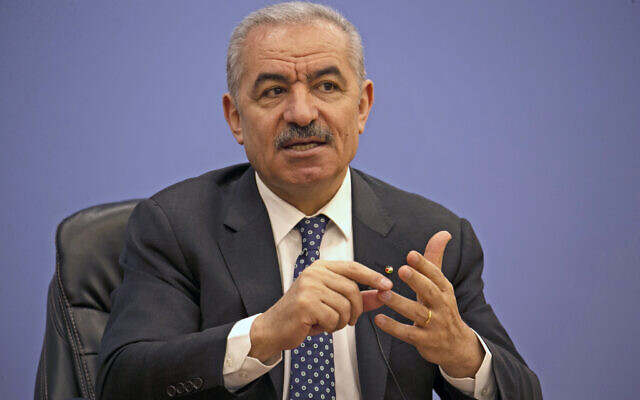 Palestinian Authority Prime Minister Mohammad Shtayyeh speaks during a press conference at the Foreign Press Association in the West Bank city of Ramallah, on Tuesday, June 9, 2020. The Palestinians said Tuesday they proposed a demilitarized Palestinian state in the West Bank, Gaza and east Jerusalem with one-to-one land exchanges with Israel, as a counteroffer to President Donald Trump’s Mideast plan. (Abbas Momani/Pool Photo via AP)

On Monday, Hussein al-Sheikh, a senior Palestinian official and close adviser to PA President Mahmoud Abbas, took a different tack, telling the New York Times that the government in Ramallah was weighing cutting off civil services to its population in the hope of compelling Israel to abandon its annexation plan.

“Either they backtrack on annexation and things go back to how they were, or they follow through with annexation and they go back to being the occupying power in the whole West Bank,” al-Sheikh said. “I will not accept that my role is a service provider. I’m not a municipality or a charity.”

EU member states are weighing options such as economic sanctions or recognition of Palestinian statehood to dissuade Israel from going ahead with the plan, and what measures to take in the event that it is not deterred, diplomatic sources say.

“We want Israel to feel international pressure,” Shtayyeh said Tuesday. “For the first time the European political allies are discussing sanctions against Israel because we asked for them,” he added.

In recent days, demonstrations against Netanyahu’s unilateral annexation plans have multiplied in the West Bank and in Israel, without, however, drawing large crowds on the Palestinian side.

“The anger is there, the dissatisfaction is there, the frustration is there and all that is a recipe for more problems,” said Shtayyeh, insisting, however, that the Palestinian Authority, led by Mahmoud Abbas, wanted to avoid widespread disruption.

The PA will transition from “a temporary authority” to “the imposition of a state on the ground, and Palestine will be a state along the 1967 borders and its capital will be East Jerusalem,” Shtayyeh said in remarks delivered to the Foreign Press Association in Ramallah.

His comments echoed statements he made Monday night to Palestine TV, when he promised to “advance all that is related to the issue of transitioning the Authority politically and legally into a state, if Israel continues along this course.” 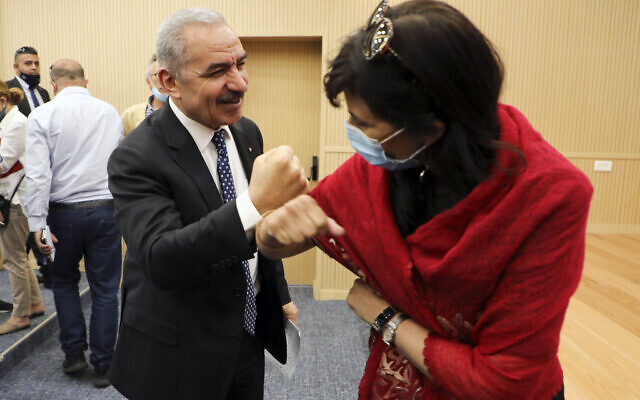 Should Israel annex large parts of the West Bank and the Jordan Valley on July 1, Shtayyeh said, the Palestinian Authority will undertake a “constitutional announcement” and establish a “constituent assembly.”

This is not the first the time that PA officials have announced a deadline for a unilateral declaration of independence. In 2011, the Palestinian Authority became a non-state member of the United Nations General Assembly after a unilateral push for international recognition. During the same period, then-Palestinian premier Salam Fayyad stated repeatedly that his government intended to pursue a declaration of statehood, with or without Israel’s consent.

The Palestinian Authority, however, never followed through on those threats — instead returning to bilateral negotiations with Israel mediated by US secretary of state John Kerry.

Nonetheless, Shtayyeh’s announcement is taking place in a considerably more fraught moment — and with a much tighter timeline. While Fayyad indicated that months or years might pass before Palestine declared itself an independent state, less than a month remains before Netanyahu can start annexing parts of the West Bank under the terms of his coalition deal with rival-turned-partner Benny Gantz, the alternate PM and defense minister.

At the time, Ramallah had a closer ally in US president Barack Obama, who called for a return to negotiations and a two-state solution. The Trump administration, on the other hand, has backed annexation in principle, with its peace plan forming the basis for Israel’s planned move.

Under the coalition deal signed between Netanyahu and Blue and White party leader Gantz, the government can begin the process of applying Israeli sovereignty to West Bank settlements and the Jordan Valley starting July 1.

It was unclear whether Shtayyeh’s proposed “constitutional announcement” would result in genuine changes in how the Palestinian Authority functions.

In Palestinian media soon after his remarks Tuesday, articles led with the Palestinian Authority’s inability to pay civil servants their monthly salaries, with Shtayyeh’s threat relegated to the last few paragraphs.

Shtayyeh also said Palestinian leaders would not give in to Israeli demands that they resume contacts in order to facilitate the monthly transfer of some $150 million in taxes and customs that Israel collects on behalf of the Palestinians. The funds are a crucial source of income for the Palestinian Authority.

Shtayyeh said Israel could continue to make the transfers without any direct contacts. He said if the transfers do not go through, the PA will be unable to pay the salaries of tens of thousands of civil servants and security forces starting this month.

“Our people are ready for sacrifices,” Shtayyeh said. “We are not ready to accept any blackmail. The issue here is not money for politics.”

Shtayyeh acknowledged that the coming period would be difficult. “Patience is the name of the game,” he said.