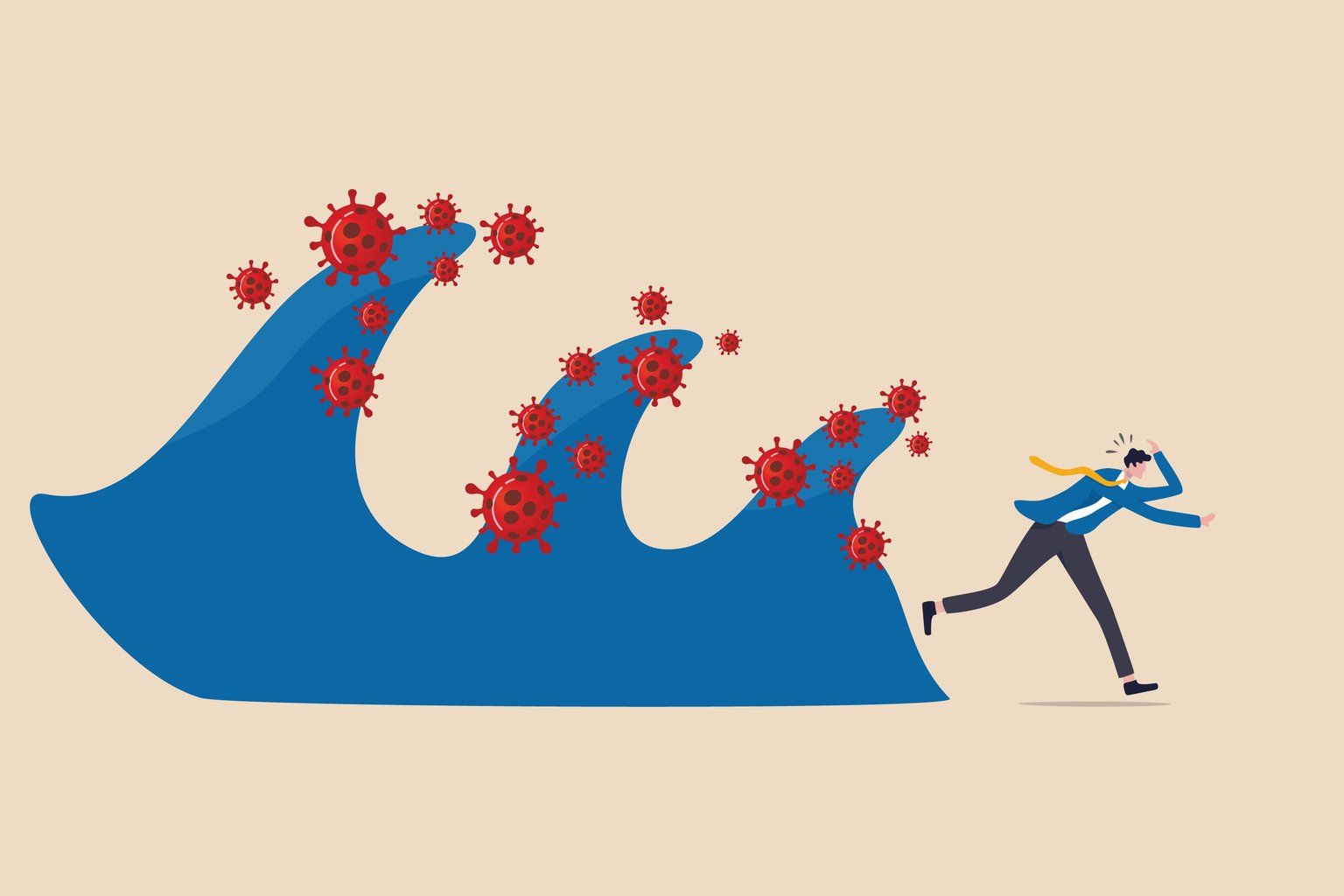 By Jefferey Jaxen from TheHighWire.com:

Both the U.S. and U.K. are wrestling with another round of lockdowns. The science doesn’t justify it.

The science, in fact, opposes the idea of a second lockdown on several fronts. Even so, it appears to matter little to the Science™ health ‘officials’ and government factions attempting to impose a second suffocating bamboozle upon the life, liberty and prosperity of their nations’ populace.

‘Refusing to cave to criticism’ writes The Washington Times, coronavirus Taskforce member Dr. Scott Atlas has stuck to his guns, and the true science, to warn about another round of lockdowns. “We know the harms are tremendous to closing schools and businesses. I don’t know why that is not front and center. That is the most important reason why I’m here,” he told The Washington Times. Warning his views have been distorted in the media while others in the public eye have been “instilling fear” instead of addressing the damage caused by lockdowns.

Efforts to isolate and neutralize Dr. Atlas as an outlier in his views have failed. What began in August in Belgium, as health professionals signed open letters opposing more lockdowns, has now gone global with the Great Barrington Declaration.

Since then, the document has been given favorable coverage among global media, though Big Pharma controlled American media has been far more lukewarm. At the time of this writing, the declaration has garnered the signatures of 235,839 concerned citizens, 6,802 medical & public health scientists and 14,880 medical practitioners.

Citing “grave concerns about the damaging physical and mental health impacts of the prevailing COVID-19 policies,” the Great Barrington Declaration calls for an approach called “Focused Protection” to ‘balance the risks and benefits of reaching herd immunity, [and] allow those who are at minimal risk of death to live their lives normally to build up immunity to the virus through natural infection, while better protecting those who are at highest risk.”

But will this come in time and will it be enough? In the U.K., restrictions recently reinstated by PM Boris Johnson included gatherings of no more than six people and a 10pm curfew. Johnson’s order for pubs and restaurants to shut across much of northern England, including Manchester and Liverpool, is expected to begin today.

With growing numbers within the government calling for evidence to support the curfews and pub closures, “Ministers scrambled to justify the policy,” writes the Telegraph. 149 MP’s from all parties in the North and Midlands were invited to a “scientific briefing” on the latest data. Claiming 29.8% of coronavirus exposures occurred in pubs and restaurants, official NHS Test and Trace figures showed only 5.5 percent.

The Cabinet Office document also referenced a July 2020 report from the U.S. Centers for Disease Control and Prevention (CDC). It involved 154 patients who were “approximately twice” as likely to have dined at a restaurant before symptoms emerged. The Telegraph reports:

“It was very clear to everyone on the call that they had cobbled together this data as a retrospective attempt to justify closing pubs. Given what we know from the official NHS figures, why are they quoting data from a tiny survey carried out in America? It’s just meaningless.”

Days ago, a video interview of Dr. David Nabarro, the WHO’s Special Envoy on Covid-19, grabbed mainstream headlines as he told The Spectator’s Andrew Neil: ‘We really do appeal to all world leaders. Stop using lockdown as your primary control method’. On Twitter alone, the video was watched 1.4 million times. 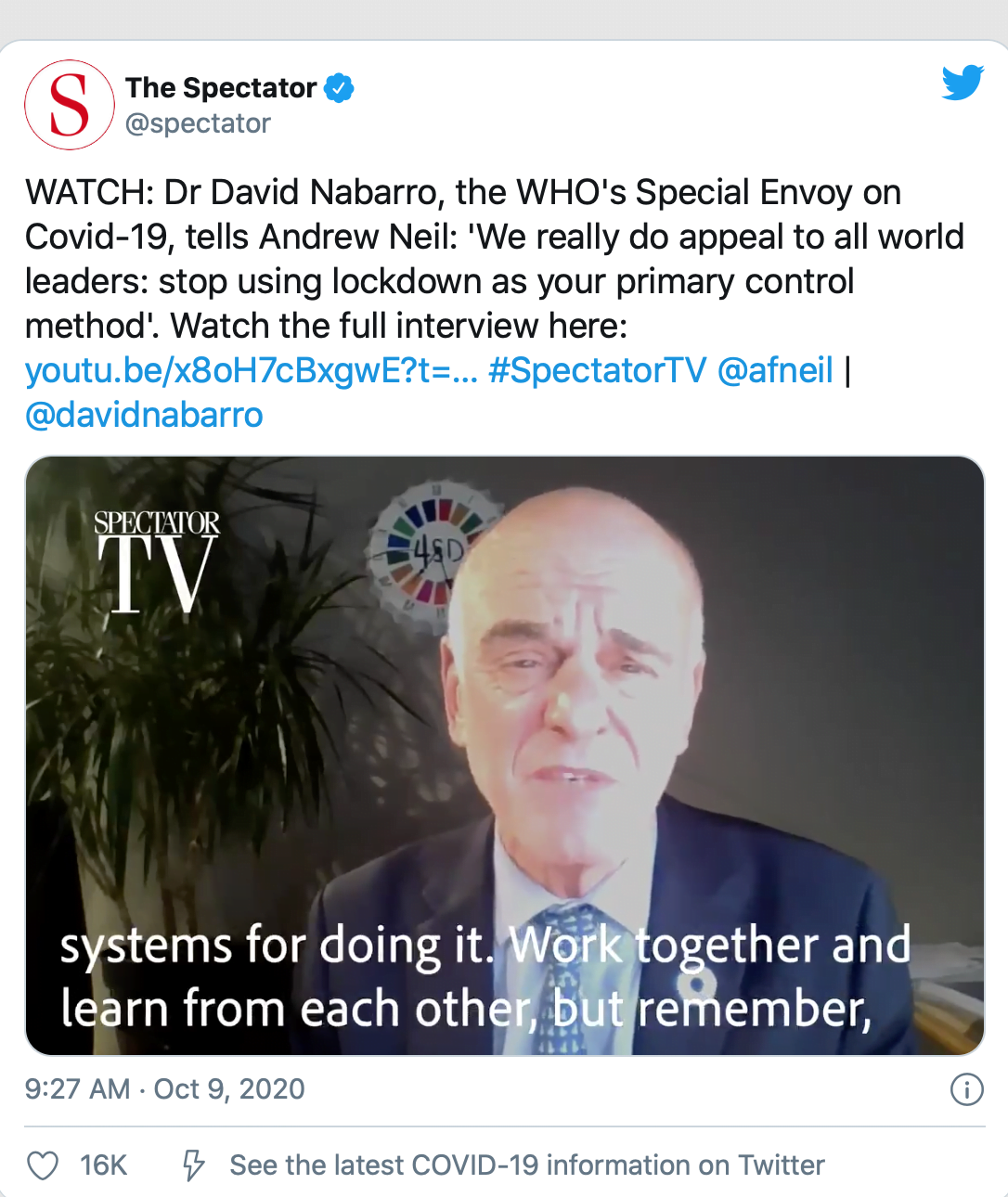 Following close behind Dr. Nabarro was former FDA head to revolving door Pfizer board member Scott Gottlieb. During his CNBC interview today he stated the US, instead of implementing a nationwide stay-at-home order, ‘could have titrated our mitigation much more effectively.’

He went on to state:

The World Health Organization’s Dr Michael Ryan Head of Emergencies revealed that WHO believes roughly 10% of the world has been infected with Sars-Cov-2. This is WHO’s “best estimate”

“The global population is roughly 7.8 billion people, if 10% have been infected that is 780 million cases. The global death toll currently attributed to Sars-Cov-2 infections is 1,061,539.That’s an infection fatality rate of roughly or 0.14%. Right in line with seasonal flu and the predictions of many experts from all around the world.”

And yet…after mulling the idea for days, Italy imposed a nationwide outdoor mask mandate last week with fines of up to 1,000 euros ($1,163) for violators. The government passed the decree even though Italy’s overall per capita infection rate is among the lowest in Europe, writes US News and World Report.

Meanwhile, anxious Americans closely watch the moves of their mayors and governors. In New York, Catholic and Jewish leaders are suing the state over its 10-person limit on religious services and mask mandates.

The Washington Examiner writes “New restrictions took effect Tuesday in ‘red zone’ parts of New York City. imposed by Gov. Andrew Cuomo and enforced by Mayor Bill de Blasio, the restrictions are unnecessarily harsh and violate the First Amendment’s free exercise clause. The ‘red zone’ zip codes targeted by de Blasio and Cuomo have large Jewish populations, adding to calls that the state is singling out Jews for special treatment, because they impede the celebration of a series of holidays beginning last week.”

Texas has eased some restrictions to allow restaurants and gyms to let more people inside, lifting a ban on elective surgeries and allowing nursing home visits under certain criteria. Texas bars, however, remain closed and the summer’s mask mandate is still in effect.

In a ‘when I say jump, you ask how high’ move of psychological warfare, California’s Office of the Governor put out a tweet advising that restaurant-goers keep their masks on while dining…’in between bites.’ “Going out to eat with members of your household this weekend?” the tweet reads. “Don’t forget to keep your mask on in between bites. Do your part to keep those around you healthy.”

Meanwhile, even before Florida ended its fines for not masking, Mississippi became the first state to end mask mandates. Several other states are engaged in legal battles to allow populations a choice of going open-faced in public. A lawsuit filed by the Wisconsin Institute for Law and Liberty seeks to end Wisconsin’s indoor mask mandate, arguing that Gov. Tony Evers lacks the authority to issue such an order.

A Michigan Supreme Court ruling invalidated Gov. Gretchen Whitmer’s mask ruling, leaving cities and counties uncertain on how to move forward. Whitmer stubbornly contends her statewide mask requirement remains in effect—despite the court’s invalidation of a law that underpins her orders to control the coronavirus pandemic. None of it makes sense, unless you see this as an exercise is sheer power.

The blatant manipulation and misuse of the COVID-19 response is becoming more obvious by the day. Hopefully as some are beginning to follow the simple science, others will balk at the increasingly oppressive behaviors by government officials. Together the two sides will serve to wake more citizens up, not drive them deeper into fear-rooted defeatist supplication.